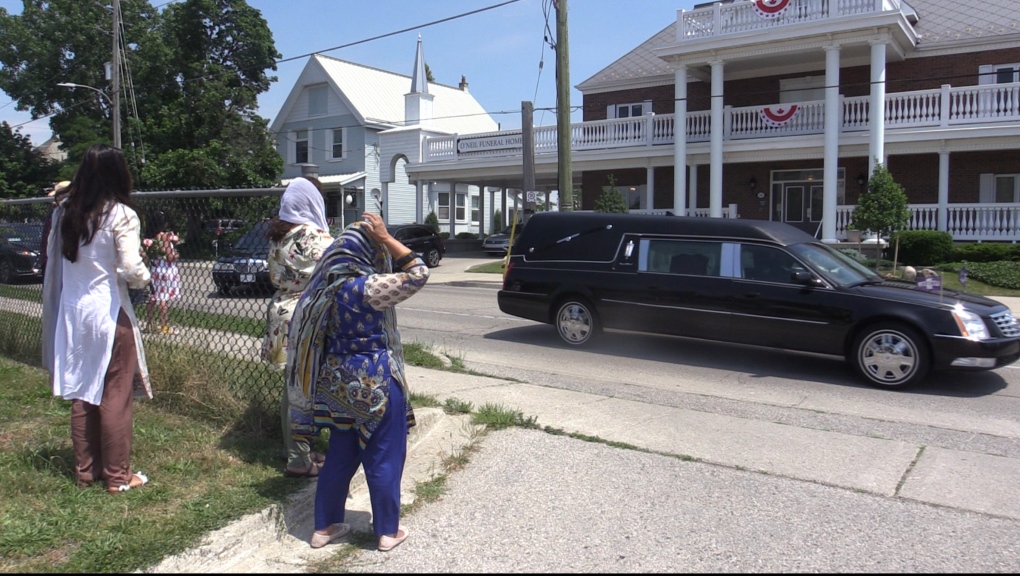 As the procession left O’Neil Funeral Home on Saturday afternoon, Londoners were there, wearing purple ribbons and putting their hands over their hearts.

â€œI came here to pay tribute to the Afzaal family, their friends and the entire Muslim community in London,â€ said Jeff Tennant, who was standing across the street.

“It is important that the entire London community comes together against Islamophobia. I hope this is a turning point for London, but we have a lot of work to do in this city.”

A few yards away was psychologist Dr. Joan Clayton, who laid flowers in front of the funeral home.

â€œI want us to stop the hate and I don’t want Muslims to be afraid to go out in public,â€ Clayton said.

“I work with people who have been traumatized and a few of my other patients have been the victims of hate crimes over the past year. I think I have to be here to support the family.”

While hundreds of people attended the funeral at the Islamic Center of Southwestern Ontario, others paid tribute and mourned from a distance.

At the site of the fatal accident, the memorial continues to expand.

â€œIt is a place of healing to tell people how we feel,â€ says Haneen Abu Dia, who left copies of the Muslim book of the Quran for people to pick up and read.

â€œWe feel bad about what happened here, and we hope that no one in the world will ever like it again. We want to feel safe, we want to feel loved and we appreciate all the love. that we saw here in London. “

Dr Sarfraz Akram and Parveen Sarfraz attended the memorial before heading to the funeral. They were friends with Salman Afzaal, one of the victims.

“It’s encouraging, especially for the Muslim community here, that everyone has come together to show their support over the past few days.”

Dr Akram, who lives near the memorial, says it’s hard to describe the feeling of witnessing the spot where his friend was killed.

â€œIn the Muslim faith, our belief tells us that we must be patient,â€ Akram says.

“We asked for Allah’s help to get us out of these difficult times.”

Marvin Shanks has been following the story all week.

â€œThere is a very deep wound here that is so much more than this tragedy,â€ said Shanks, who took part in the multi-faith walk on Friday night.

â€œThe depth of the hurt is that over the centuries we have treated each other with suspicion. We have treated different people, like enemies.

What I really appreciated about last night’s experience of the Walk was that there were thousands of us who were one. “

The funeral was held at the Islamic Center of Southwestern Ontario, celebrating the lives of Talat Afzaal, 74, his son Salman Afzaal, 46, his wife Madiha Salman, 44, and their daughter from 15 years old Yumnah Salman.

All four were killed last Sunday when struck by a truck during one of their usual nighttime walks. The couple’s nine-year-old son, Fayez, was the only survivor and remains in hospital with serious injuries.

After the service, a funeral was held at the Islamic Cemetery in London.

The next step is for the healing to begin.

â€œIt’s a deep scar, and it’s going to take time to heal, but we love the response from the community, and it will help us,â€ said Nawaz Tahir, spokesperson for the Muslim Mosque in London.

‘These acts are becoming much more common,’ laments the Muslim community of Simcoe County