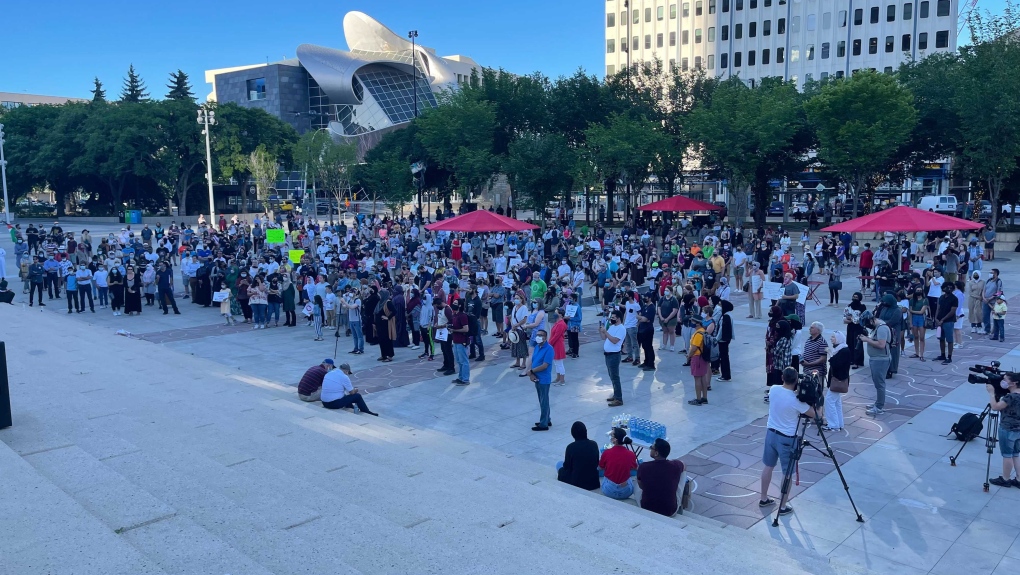 Hundreds of Edmontonians gathered and demanded action from all levels of government on Friday night following the attack on two Muslim sisters in St. Albert earlier this week.

The incident was the latest in a series of hate-motivated incidents that police in Edmonton and across Canada are investigating.

The rally was organized by the National Council of Canadian Muslims (NCCM).

Amira Shousha, NCCM’s regional manager for Alberta, said in an interview that the rally was intended to show the anger of the Muslim community that street attacks continue to occur in Canada.

“We are all here to show solidarity with those who have been injured and to express our disgust for what is happening,” she said.

The group hopes to see all levels of government work together on an action plan to protect racialized Albertans and rid communities across Canada of Islamophobia.

Shousha said the NCCM is calling on all levels of government to form a new bipartisan committee to create coordinated responses to Islamophobia with representation from all ethnic and religious communities.

â€œWe will not let hate win,â€ she said. â€œWe want to be able to walk with our family and not be injured.

â€œThese attacks are getting worse, they are getting more daring. And now, more recently, there was a weapon involved in the latest attack.

While the UCP provided funding to help improve the safety of places of worship and a motion to the Alberta legislature recommending the passage of by-laws regarding street harassment and hate crimes, Shousha said racialized communities need stronger action now.

â€œ(These are) great first steps,â€ she said. â€œWe are all on the alert. Myself, as a Muslim Hijabi woman, I take extra care to make sure that I am not alone when I am, even in broad daylight, taking a walk.

She said there were concerns that even people who wanted to attend the rally would not be safe.

â€œThis anxiety is not new, but it is reaching a really intense level,â€ added Shousha. “This fear shouldn’t be in our community.”

Myriam St-Germain said she attended the rally to help show her support for those affected by hate and demand change so that no one has to be afraid when they want to go out in public.

â€œWe are all human beings. We must live in peace side by side and support each other, â€she said.

HATE-MOVED ATTACKS IN THE REGION

There have been at least eight reported hate attacks against Muslim women in the Edmonton area since the end of last year.

According to data provided to CTV News Edmonton by the Edmonton Police Service (EPS), hate crimes involving people are already on track to exceed the amount committed in 2020.

In 2021, there were 21 hate crimes involving people and 23 involving property, according to EPS.

According to EPS, the total in 2020 for hate crimes involving people was 23 and 37 involved property.

For 2019, there were 30 hate crimes involving people and 27 involving property.

Earlier this month, a woman in her 50s was walking around when she was approached from behind and thrown onto the sidewalk.

In April, police said a Muslim family in Edmonton was the target of a road rage incident in which a driver “made a profane gesture” towards a woman wearing a hijab.

In March, an Edmonton man was charged with three apparently hate-motivated incidents, including verbally assaulting a teenager who wore a hijab while waiting in a transit center and insulting a woman wearing a burqa.

In February, police said a woman wearing a hijab was threatened by a man at the Century Park LRT station.

And in December last year, an Edmonton man was charged after what police described as a “hateful” attack on two Somali women in the parking lot of the Southgate Center.

Does Saint-Jean include the Muslim community of Quebec? – Video