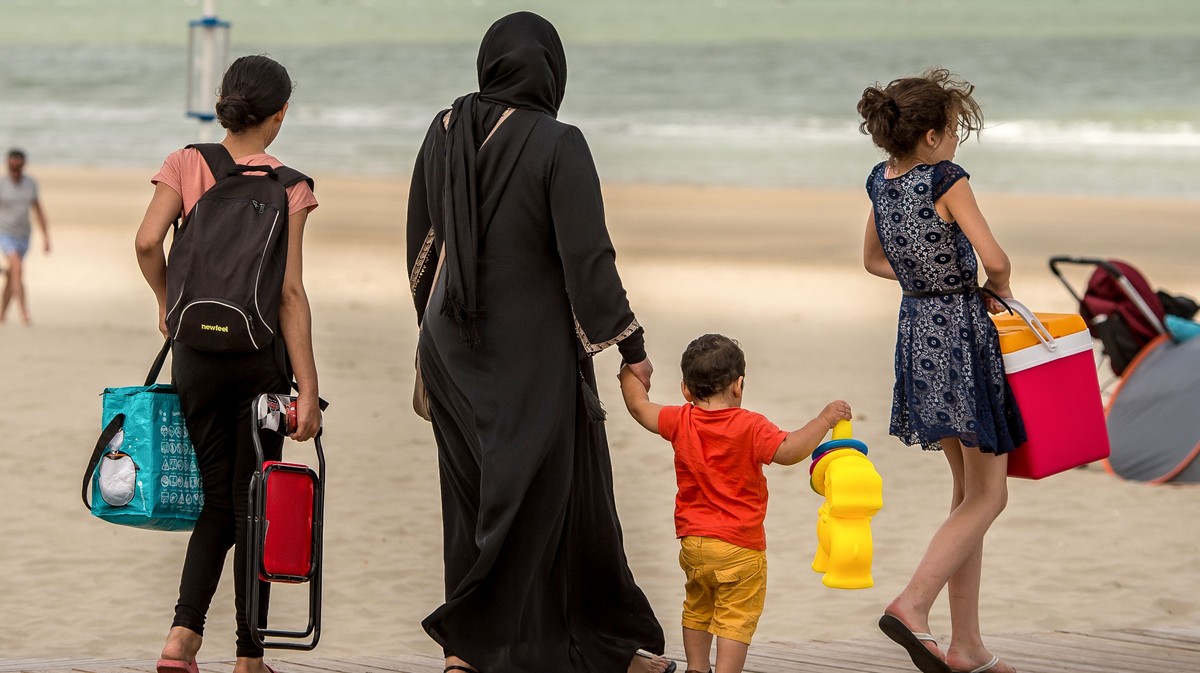 Towards the end of her first year of medicine in Marseille in 2017, Nadia underwent a routine check-up before starting rotations at the hospital. The nurse examining her was staring at her openly, her face contorted in a scowl. When she noted Nadia’s weight, she deducted two kilograms from the reading on the scale, “because of the heavy clothing.” Nadia glanced at her outfit: a blazer and a skirt. But she knew what she really meant. It was the hijab, an ivory pashmina wrapped around her face, that was an affront.

It was only the beginning of a series of abuses. The nurse motioned to him veil, French for veil or scarf, and said: “Let your hair breathe, it will fall out wearing this all the time.” She told Nadia, a frequent blood donor, about a vitamin D deficiency that she did not have and told her to “get out of the house more, I know in your culture women stay locked up all the time. daytime”. When she left, Nadia barely resisted the urge to cry.

â€œBeing a Muslim woman in France is judged every day, everywhere. When we go to the grocery store, people stare at us and feel embarrassed by our presence. Our children cannot speak of their faith for fear of being called terrorists, â€explains Nadia, who can only reveal her first name for fear of further harassment. â€œWe feel very in danger, it becomes suffocating. We are not treated like real French citizens who work here, pay taxes and take care of the sick, but like animals that have no rights.

France is home to the largest Muslim community in the Western world, with just over 4 million people, or around 8% of the country’s total population. A third of the French team that won the 2018 World Cup was Muslim. It is therefore disconcerting that 44.6% of French people perceive Islam as a threat to national identity. The staunchly secular nation has long been at war with itself over its Muslim citizens, especially veiled women, who face increasingly blatant cases of Islamophobia.

On March 30, the French Senate voted in favor of a “bill on separatism,” a law which, if passed by the French National Assembly, would prohibit girls under 18 from wearing the hijab. in public. The controversial amendment triggered the viral hashtag #HandsOffMyHijab and drew condemnation from critics accusing the attempt to target France’s Muslim minority. Amnesty International has called for the â€œmany problematic provisionsâ€ of the bill to be removed or amended.

It is the most recent development of the decades-long dispute in France over the headscarf. In 2011, France became the first country to ban women from wearing the niqab, or veil, outside of their home. Prior to that, French law prohibited â€œostentatiousâ€ religious symbols in schools, including the hijab, oversized crosses, and kippahs. The 2016 â€œburkini banâ€ imposed by several coastal towns drew criticism from the UN for â€œfueling religious intolerance and stigmatization of Muslims in France, especially womenâ€. According to the Collectif contre l’islamophobie en France, a nonprofit group that sought to combat discrimination against French Muslims and which was forcibly dissolved in December last year, 70% of Islamophobic acts and hate speech is directed against women. For many, the recent candidacy is another step towards diminishing the autonomy and agency of French Muslim women.

Lamya, a 23-year-old business student in Champigny-sur-Marne, in the Paris suburbs, knows many women who have stopped wearing the headscarf for fear of ostracism or unemployment. For those who keep their hijabs, she says, the alternative has been to drop out of college altogether.

â€œIt’s no secret that wearing a hijab in France will make it difficult for you to find a job. Many companies still refuse to accept women wearing a hijab, Muslims lose their jobs for praying at work, â€said Lamya, who asked to use only her first name. â€œDuring my first internship, the manager who hired me told the CEO that I had an illness that caused my hair to fall out, so I could wear the hijab without commenting on it at work.

It is impossible to disentangle the importance of modern Islamophobia from France’s imperial heritage. The French occupation of predominantly Muslim countries in Africa and the Middle East meant limiting the use of Arabic to the private sphere, and in Algeria, ceremoniously forcing women to remove their veils and burn them in a so-called manifestation of liberation from patriarchy. A colonial poster from the 1960s depicts a smiling woman unveiled among her veiled peers, with a caption aimed at tempting and ridiculing: “Aren’t you beautiful?” Take off your sails!

â€œMuslim women are always portrayed by the media, movies or politicians as oppressed women without any free will, and who must be saved. This conception is a Eurocentric point of view and a racist, sexist and Islamophobic definition of liberation, â€Fatima Bent, head of the Paris-based intersectional feminist and anti-racist organization Lallab, told VICE World News. “The argument for banning the hijab has nothing to do with liberation and aid for Muslim women, it is the continuation of a European colonial power which asserts its domination over a religious minority, which encourages the racism and reinforces stereotypes. “

Laila, who also asked not to disclose her full name, moved from Meaux, a city in the Paris metropolitan area, UK six months ago, after enduring decades of anti-Muslim abuse in the country his family had lived in for generations.

â€œHere, I see veiled bus drivers, veiled cashiers, veiled teachers. It seems unreal to me. I can go to the pool in a burkini, I haven’t swam for 12 years, â€says Laila. â€œOn this side of the Channel, I see even more clearly the straitjacket that bound us, how we were not entitled to mundane things like swimming, working and studying in all fields.

Much of the rhetoric around the hijab in France is shrouded in feminist language. He rejects veils as a symbol of female subjugation, a notion that has been propagated by white and Muslim women. The European Network Against Racism found that Muslim women were forgotten, ignored and often belittled by traditional feminist structures. Many have pointed out the flaws in the argument: if feminism, reduced to its essence, is the right of women to choose, how can institutions invoke feminism as the motive for legislation that ultimately limits those choices?

â€œThe laws are infantilizing. I think it’s a desire for domination. Since when do you release someone by telling them what to wear and what not to wear? Laila said. â€œThis has no logic: we feel both the victim of a paternalism that wants to free us from a pseudo-paternalism, and at the same time demonized as if the sight of our veils could radicalize anyone who looks at us. They want to make us invisible. In fact, that’s the word: we feel invisible.

Bent believes that the French still consider being a Muslim and a feminist to be contradictory positions. She says: â€œFrench accounts still speak of ‘the Muslim woman’, as if we were a monolithic block. We are constantly denied in our plurality and it is totally dehumanizing. Muslim women must constantly negotiate their place in society and their humanity â€,

“Our voices, our experiences, our realities and our struggles as Muslim women living in France have too often been silenced,” says Bent. â€œRepresented as a homogeneous block and reduced to a paradoxical silence: we never stop talking about it, but we never give them a voice.

The French Senate votes to ban the hijab for Muslim women under 18; UC students speak out | News

Seattle U Muslim community calls for religious freedom – the Spectator