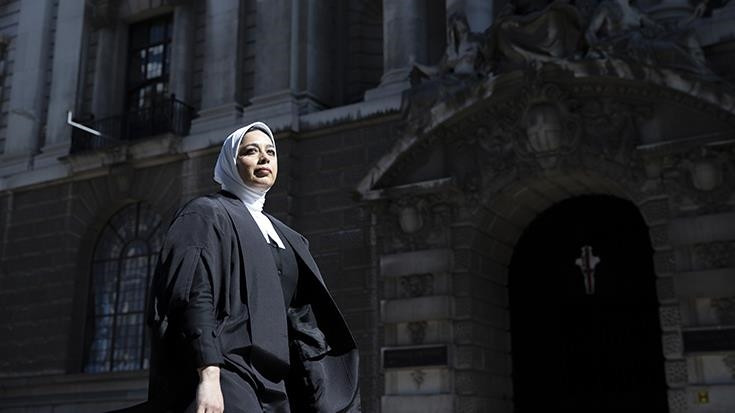 Sultana Tafadar, the UK’s first hijab-wearing criminal lawyer, who also became the first hijab-wearer from the criminal bar to be appointed as Queen’s Counsel, aims to set an example for women by chasing their dreams and achieving their goals.

Tafadar, who has achieved the highest mark of excellence a lawyer can hold in the UK, shared his success story with Anadolu Agency.

As a human rights, international law and criminal justice lawyer specializing in counter-terrorism and national security cases, Tafadar is the second daughter of immigrants who have moved to the UK since the Bangladesh.

Read more: Hijab: the most misunderstood piece of fabric

Tafadar, who was admitted to the criminal bar in 2005, was born and raised in Bedfordshire, where she attended a local state school.

Less than 2% of solicitors in Britain become Queen’s Counsel, with most practicing as barristers or barristers in Scotland.

Meanwhile, becoming a Queen’s Counsel is a difficult process in the UK, as lawyers generally need to have at least 15 years’ experience for application. They are applying for review, delivering 12 key cases over the past three years, with 12 judges, 12 barristers and 12 solicitors as adjudicators.

There are 1,928 Queen’s Counsels in Britain, less than 2% of the entire legal profession.

“Not an easy journey”

“It was not an easy journey. And that’s why I’m absolutely thrilled to be in this position. It’s a very long process. It’s a difficult journey,” Tafadar said, referring to his journey. towards success.

She pointed out that if you look at the number of women who have already been appointed as Queen’s Counsel, the numbers “are not that big”.

Noting that achieving the Excellence rating was a “long and difficult process”, she stressed that “the odds are not always in our favor”.

“And it’s every lawyer’s dream to become a Queen’s Counsel,” she added.

Tafadar said that in her early days, she was the only person in the crime bar to wear the hijab.

Speaking on France’s ban last month on supporters of wearing the hijab, Tafadar said “the irony is just quite sad”.

On March 2, France’s highest court upheld a ban on lawyers wearing the hijab and other religious symbols in courtrooms in Lille, northern France. This historic decision sets a precedent for the rest of the country.

Tafadar recalled that in being appointed Queen’s Counsel, “which actually means I am in the top 2% of the legal profession”, she has done a “really good job” throughout her career.

“I wore my hijab when I was appointed to this position. Other lawyers wear wigs, but I don’t have to. And it’s sad because just across the Channel you have a whole different scenario where lawyers are not allowed to go to court with hijab, women are not allowed to realize their ability and their full potential,” she said.

She pointed out that there are several rights that are violated in this case.

“It’s a bit sad for me to be here, I guess, celebrating and enjoying my achievement, but knowing that people across the Channel can’t enjoy the same kinds of opportunities as I do. appreciated.”

Submissions to the UN

Tafadar said they were submitting observations to the UN to highlight the fact that “France has these laws and policies in place, and we want to see what can be done at the international level.”

She said “tackling sports bodies” is another area she wants to raise awareness about.

Noting that the Olympics are meant to represent “tolerance and bringing together different cultures”, Tafadar said that “it makes no sense to refuse to allow women representing a different religion in countries hosting the Olympics to participate. games”.

She questioned the possibility of France being allowed to host these games when they exclude people from participation and “act contrary to the values ​​and ideals of the Olympics”.

“I guess what I want to say to women who face all these challenges to be a woman, to be from a minority background, to visibly practice our faith, is that there will be challenges that you will be undoubtedly face,” she said.

Tafadar said it’s important to persist and not give up, and that “those obstacles can become obstacles that can fall.”

“And I hope to be an example. The fact that I managed to achieve this shows that it can be done. We can see things as being impossible, but it is not beyond our reach. Unfortunately, there are structures in place that prevent us from reaching that full potential, but it’s up to us to carry on and dismantle the structures to achieve our goals.”