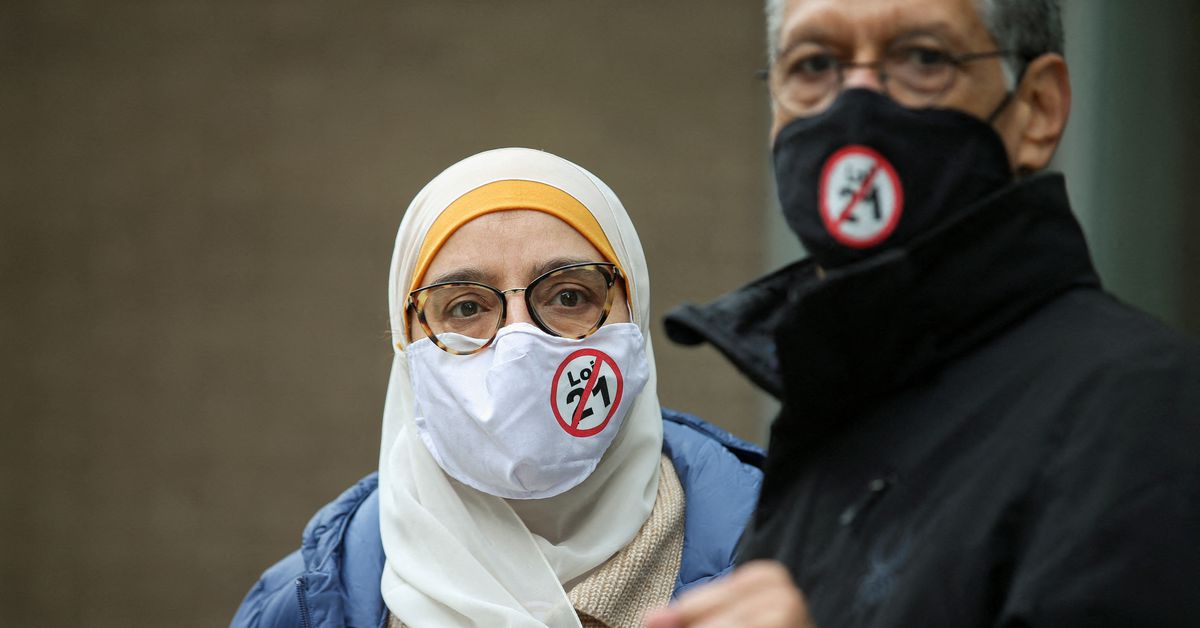 People attend a protest against Bill 21, after a court ruled that some provincial teachers and politicians were exempt from a controversial law banning public employees from wearing religious symbols, in Montreal, Quebec, Canada, April 20, 2021. REUTERS / Christinne Muschi

TORONTO, Dec. 10 (Reuters) – Canadian Prime Minister Justin Trudeau has not “closed the door” to legal action against a Quebec law that cost a teacher her job last week because of her hijab, announced his office on Friday.

A grade 3 teacher in Chelsea, Que., Has been transferred to another post under a Quebec law that prohibits public sector employees in positions of authority from wearing religious symbols, Wayne Daly told Reuters, Interim President of the Western Quebec School Board.

It has been inundated with phone calls and emails ever since, he said – with the vast majority opposing the move. In a hand-drawn map posted online by human rights activist Amira Elghawaby, a grade 3 student denounced the transfer as “unfair.”

The predominantly French-speaking province of Quebec promulgated the law in 2019 to ostensibly maintain â€œsecularismâ€ – secularism – in its public service.

The bill, partially upheld by a Quebec court this spring, has been criticized for targeting Muslims, Sikhs and Jews. Federal party leaders demanded an apology during a debate over the September federal election after the moderator called it discriminatory.

â€œNo one in Canada should ever lose their job because of what they wear or because of their religious beliefs,â€ Trudeau’s office said in an email. “We have not closed the door to representation in court in the future,” he added.

Inclusion and Diversity Minister Ahmed Hussen told reporters on Thursday it was “premature” to ask the federal government if it plans to oppose the two-year-old law.

The Canadian Civil Liberties Association (CCLA), the National Council of Canadian Muslims and other groups have filed documents to support their case in an appeals court, likely next year.

They are facing a difficult battle because Quebec invoked a clause allowing governments to pass laws that violate certain parts of the Canadian Charter of Rights and Freedoms. But federal government support could make a difference, said Emmett Macfarlane, professor of politics at the University of Waterloo.

â€œThere is evidence that government interventions in constitutional matters can carry some weight. “

Macron presents the priorities of the French Presidency of the Council of the EU – EURACTIV.com

The school board should not have hired a teacher wearing the hijab: Legault