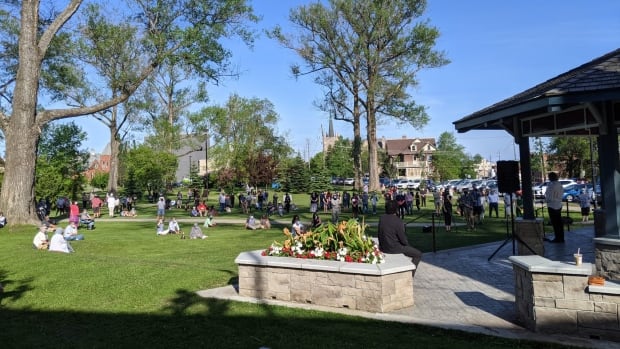 Before heading to the Afzaal family vigil in Thunder Bay, Ont., Hikma Sherzad says he pulled a shoebox out of his closet and found remarks he had written years earlier. early.

It was a speech he gave at a vigil in 2017, after a man killed six people at a Quebec mosque. Sherzad, who is the Imam of the Thunder Bay Masjid, said he hopes he never has to read those notes again.

“After filming, I honestly didn’t think I would have to do it,” Sherzad told CBC News.

But in front of a crowd in Waverley Park on Wednesday, he spoke in honor and in remembrance of the four members of the Afzaal family who were killed in a hate-motivated hit and run on Sunday while out for an evening stroll in London , Ontario. .

Police called the attack “planned, premeditated” and said the family was targeted because of their Muslim faith. A 20-year-old man, Nathaniel Veltman, has been charged with four counts of murder and one count of attempted murder, and terrorism charges are being considered.

Shadiya Aidid also spoke at the vigil. Like Imam Hikma Sherzad, she released a poem she wrote for the anniversary of the Quebec City mosque shooting.

“It was about the feeling of being in a mosque and feeling safe…and then the opposite, the rhetoric that was put out by white supremacist groups and Islamophobia in the media and elsewhere.”

Aidid, a graduate student at Lakehead University and a member of Thunder Bay’s Muslim community, said she must have read the poem at several firesides since.

“I don’t want to have to re-read this poem. I don’t want us to come into this space and feel this and cry collectively,” Aidid said. “There shouldn’t be any need for it.”

In response to the attack in London, Ontario, there was an outpouring of calls for action to combat anti-Muslim hatred.

This must start with ending “state-mandated Islamophobia”, Aidid said.

She cites Quebec’s Bill 21, which prohibits public officials — including public teachers, police officers and government lawyers — from wearing religious symbols at work and particularly affects Muslim women who wear the hijab, for example.

Aidid also cites Bill C-51, which was passed in 2015 and expanded the powers of the Canadian Security Intelligence Service to monitor and share information of suspected terrorists, as an example of legislation that affects and violates disproportionately the privacy of people with Muslim names.

“We have to recognize that many of the terrorist attacks that we see, not just against Muslim communities, but Canadians in general, are coming from white supremacist groups,” she said.

“A lot of people in our community are going through all these different emotions and feelings, and are very hurt and frustrated and they don’t feel like they’re being heard in government,” Alsumadi said.

Some Muslims in Thunder Bay may not feel safe standing in front of the bus or walking around, and they want to be asked “what makes us feel safer,” she added.

Much of the Islamophobia, racism and hatred stems from ignorance, Lahama Naeem said.

A member of the Muslim community of Thunder Bay, Naeem was the master of ceremonies and co-organizer of the vigil. She is also president of the Lakehead University Student Union and former student councilor for the Lakehead District School Board.

“I think we really need to make a better effort to educate our children, educate our communities about Muslims,” ​​she said.

“Even if we start there and make a better effort not to demonize these different marginalized communities to our children, I think it could go a long way in preventing incidents like [the attack in London, Ont.] to reproduce.”

Naeem says there was a lot of activity going on before COVID-19 to share the first-hand experiences of Muslims in Thunder Bay and talk about what happens in a mosque, but much of that work has been put on hold. .

“It’s very, very important for people to try to make their own connections and get information from credible sources, rather than letting [stereotypes and misconceptions found in the media] nurture their understanding of the people around them. »

Coming together to mourn and take a stand against oppressive stereotypes…Thunder Bay residents held a vigil this week in Thunder Bay to honor the Muslim family who were killed in London, Ontario. Listen to one of the organizers. 6:18