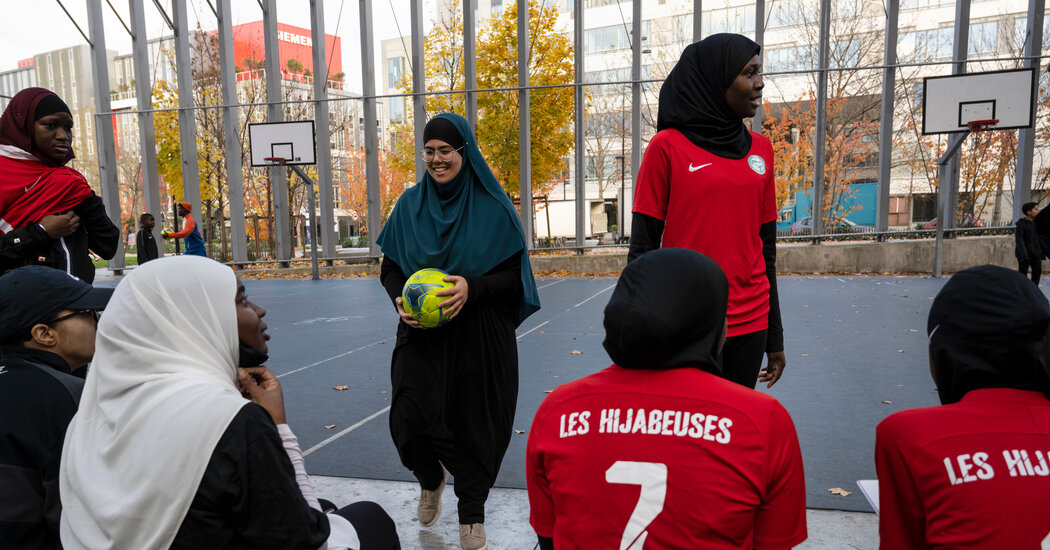 It happened again on a recent Saturday afternoon in Sarcelles, in the northern suburbs of Paris. Her amateur team had come to face the local club, and Diakité, a 23-year-old Muslim midfielder, feared she would not be allowed to play in her hijab.

This time the referee let her in. “It worked,” she said at the end of the game, leaning against the fence bordering the field, her smiling face wrapped in a black Nike scarf.

But Diakité had only slipped through the cracks.

For years, the French football federation has banned players taking part in competitions from wearing ostentatious religious symbols such as the hijab, a rule it says is in line with the organisation’s strict secular values. Although the ban is loosely enforced at the amateur level, it has plagued Muslim female gamers for years, shattering their professional career hopes and driving some away from the game.

In an increasingly multicultural France, where women’s football is booming, the ban has also sparked an increasingly violent reaction. At the forefront of the fight is Les Hijabeuses, a group of young hijab-wearing female footballers from different teams who have joined forces to campaign against what they describe as a discriminatory rule that excludes Muslim women from sport.

Their activism has struck a chord in France, reigniting heated debates over the integration of Muslims in a country with tortured relations with Islam, and highlighting the struggle of French sports authorities to reconcile their defense of strict secular values ​​with growing calls for greater representation on the field.

“What we want is to be accepted as we are, to implement these great slogans of diversity, inclusion,” said Founé Diawara, president of the Hijabeuses, which has 80 members. “Our only desire is to play football.”

The Hijabeuses collective was created in 2020 with the help of researchers and community animators to try to resolve a paradox: while French laws and FIFA, the governing body of world football, authorize sportswomen to wear the hijab , the French football federation banned it, arguing that it would break with the principle of religious neutrality on the pitch.

Supporters of the ban say the hijab portends Islamist radicalization taking over the sport. But the personal stories of Hijabeuses members underscore how football has been synonymous with emancipation – and how the ban continues to look like a step backwards.

Diakité started playing football at age 12, first hiding it from his parents, who considered football a boy’s sport. “I wanted to be a professional footballer,” she said, calling it “a dream”.

Jean-Claude Njehoya, her current coach, said that “when she was younger she had a lot of skills” which could have propelled her to the highest level. But “from the moment” she realized the hijab ban would affect her, he said, “she didn’t really push herself any further.”

Diakité said she decided on her own to wear the hijab in 2018 – and give up on her dream. She now plays for a third division club and plans to open a driving school. “No regrets,” she said. “Either I am accepted as I am or I am not. And that’s all.”

Karthoum Dembele, a 19-year-old midfielder who wears a nose ring, also said she had to confront her mother to be allowed to play. She soon joined an athletic-intensive program in college and competed in club trials. But it wasn’t until she learned of the ban four years ago that she realized she might not be allowed to compete anymore.

“I had managed to get my mum to give in and I was told the federation wouldn’t let me play,” Dembele said. “I said to myself: What a joke!”

Other members of the group recalled episodes when referees banned them from the field, prompting some, feeling humiliated, to leave football and turn to sports where the hijab is authorized or tolerated, such as handball or football. futsal.

Throughout last year, Les Hijabeuses lobbied the French Football Federation to overturn the ban. They sent letters, met with officials and even staged a protest at the federation’s headquarters – to no avail. The federation declined to comment for this article.

Paradoxically, it was the fiercest opponents of the Hijabeuses who finally put them in the spotlight.

In January, a group of conservative senators tried to enshrine the hijab ban imposed by the football federation into law, arguing that the hijab threatened to spread radical Islam in sports clubs. This decision reflects a persistent malaise in France concerning the Muslim veil, which regularly arouses controversy. In 2019, a French store dropped a plan to sell a hijab designed for runners after a barrage of criticism.

Boosted by the efforts of senators, Les Hijabeuses led an intense lobbying campaign against the amendment. Taking advantage of their strong presence on social networks – the group has nearly 30,000 followers on Instagram – they launched a petition which collected more than 70,000 signatures; rallied dozens of sports celebrities to their cause; and games held in front of the Senate building and with professional athletes.

Vikash Dhorasoo, a former France midfielder who attended a game, said the ban left him stunned. “I just don’t understand,” he said. “Muslims are the target here.”

Stéphane Piednoir, the senator behind the amendment, denied the charge that the legislation specifically targeted Muslims, saying it focused on all visible religious signs. But he acknowledged the amendment was prompted by the wearing of the Muslim veil, which he called a “propaganda vehicle” for political Islam and “visual proselytizing”. (Piednoir also condemned PSG star Neymar’s display of Catholic tattoos as “unfortunate” and questioned whether the religious ban should extend to them.)

The amendment was eventually rejected by the government majority in parliament, but not without friction. Parisian police have banned a demonstration organized by Les Hijabeuses, and the French sports minister, who mentioned law allows women wearing hijab to gamble, clashed with government colleagues opposed to the scarf.

The Hijabeuses fight may not be popular in France, where six in 10 people support banning the hijab on the streets, according to a recent poll by polling firm CSA. Marine Le Pen, the far-right presidential candidate who will face President Emmanuel Macron in a runoff on April 24 – with a chance of winning the event – said if elected she would ban the Muslim veil in public spaces.

But, on the football field, everyone seems to agree that the hijab should be allowed.

“No one minds playing with it,” said Rana Kenar, 17, a player from Sarcelles who came to watch her team take on the Diakité club on a freezing February evening.

Kenar sat in the stands with about 20 other players. All said they viewed the ban as a form of discrimination, noting that at the amateur level the ban was applied loosely.

Even the match referee at Sarcelles, who had let Diakité play, seemed to disagree with the ban. “I looked the other way,” he said, declining to give his name for fear of repercussions.

Pierre Samsonoff, the former deputy director of the amateur arm of the football federation, said the issue would inevitably come up again in the years to come, with the development of women’s football and the organization of the 2024 Olympics in Paris, which will bring together veiled athletes of Muslim origin. countries.

Samsonoff, who initially championed the hijab ban, said he has since softened his stance, acknowledging the policy could end up ostracizing Muslim players. “The question is whether we are creating worse consequences by deciding to ban it on the fields than by deciding to allow it,” he said.

Piednoir, the senator, said the players were ostracizing. But he admitted never having spoken with athletes wearing the hijab to hear their motivations, comparing the situation to “firefighters” who were asked to go “listen to arsonists”.

“We’re holding on,” she said. “It’s not just for us, it’s also for young girls who tomorrow will be able to dream of playing for France, for PSG”