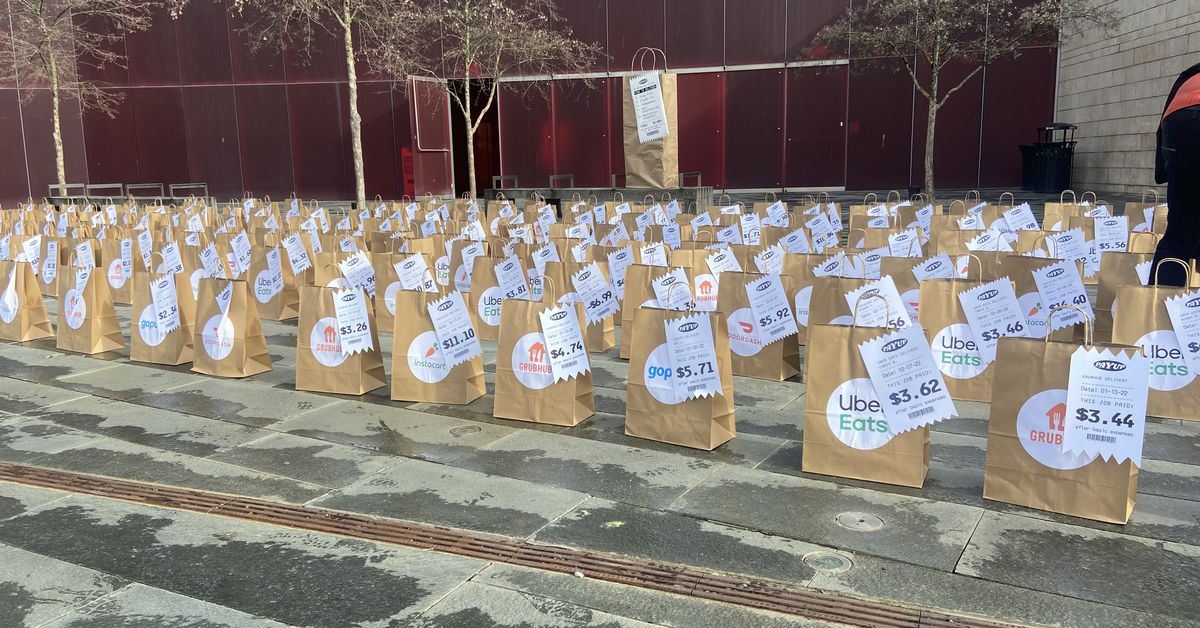 Food delivery drivers yesterday brought 400 paper bags to Seattle City Hall, each labeled with receipts showing the actual dollar amounts the drivers earned on the deliveries after expenses – some of which were negative numbers – to show how little drivers often earn delivering food around the city.

A delegation of drivers who work for companies like UberEats, Grubhub, DoorDash and InstaCart, backed by labor rights group Working Washington, are calling on the Seattle City Council to pass legislation guaranteeing them a minimum wage after expenses. Food delivery drivers often earn less than Seattle’s minimum wage after factoring in expenses like gas and car maintenance, says Working Washington spokesperson Sage Wilson. About 40,000 gig workers, mostly food delivery workers, are currently excluded from minimum wage and other workplace protections, he says.

Wilson says council member Lisa Herbold champions the policy and council member Andrew J. Lewis also supports the cause. Last week, a draft policy was presented at a committee hearing. The next step is to formally present the policy at a committee hearing, before going to a vote in front of the full board, which Wilson expects to happen in the coming weeks. Working Washington was previously instrumental in passing the city’s $15 minimum wage.

“It’s time for the council to deliver the workers again and show that Seattle is a place where we can make sure that the people who work in the city are protected by labor standards and receive enough money to pay the rent,” Wilson said.

Seattle adopted minimum compensation standards for Lyft and Uber drivers who transport passengers in 2020, but those protections do not yet apply to drivers who deliver food.

Capitol Hill Yunnan-Sichuan’s Plenty of Clouds restaurant, which also owns a Ballard food truck, is opening a Chinese noodle restaurant in South Lake Union, according to Seattle Met. It will be located at 422 Yale Ave N, two blocks north of REI.

The restaurant will make its own noodles from Washington wheat and serve about half a dozen noodle dishes from across China, with a focus on Sichuan Province; it will also have a full cocktail bar and draft beer. Plenty of Clouds is owned by Ethan Stowell’s former Bramling Cross chef Travis Post and his wife, Lisa Zak, and is expected to open around April 1.

French-Belgian Redmond Farine Bakery and Cafe, which serves flaky croissants, crispy baguettes and other well-executed breads and pastries, is opening a new bakery in Bellevue. According to an Instagram post, the new location will have a dining capacity of 90 people and a heated outdoor terrace. At the first location, the bakery serves baguette sandwiches, smoked salmon and ham toast, liege waffles, salads, soups and espresso drinks. The bakery is owned by Olivier Dispas, a former Microsoft executive from Brussels who recently changed careers to study French bread and pastries.


Register to receive the newsletter