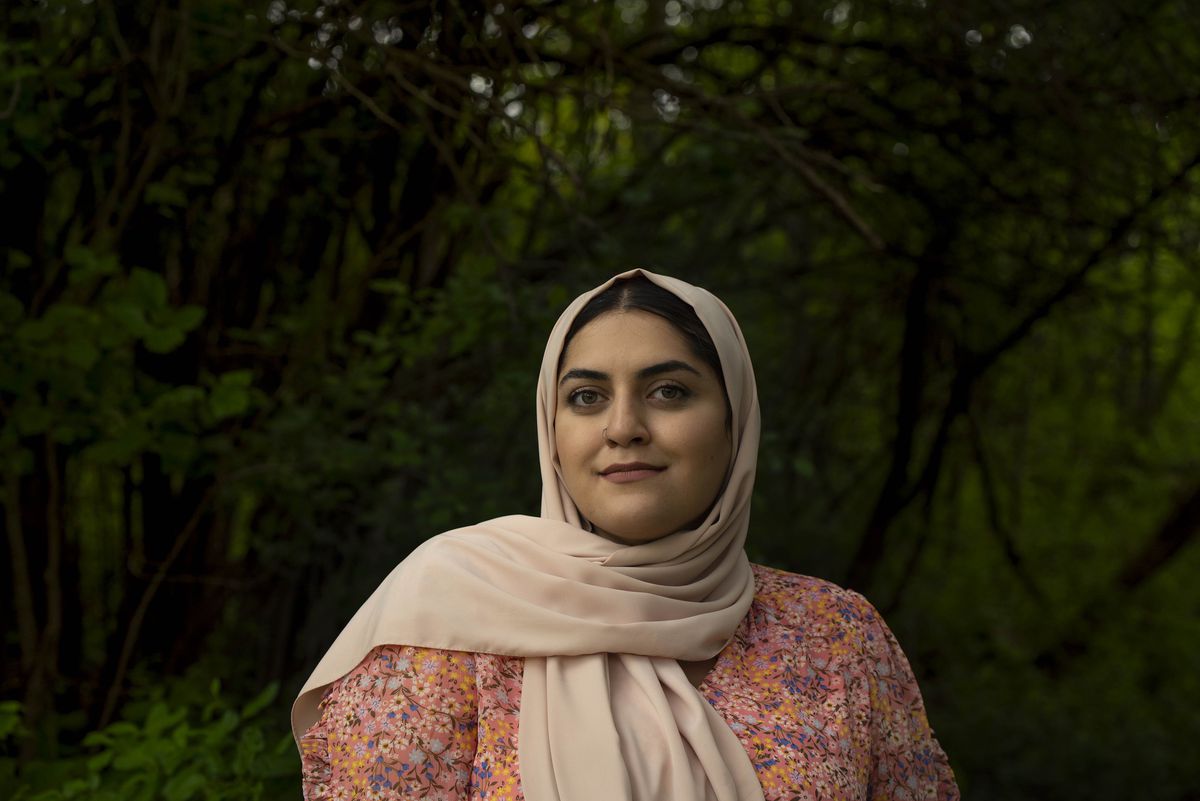 For days after the deadly attack, Fatemeh Anvari felt numb, unable even to cry. In early June last year, at an intersection in London, Ontario, a van ran over a Muslim Canadian family, killing four people and injuring another. Police said they believe the act was intentional and motivated by hate. For the first time in her chosen country, Ms Anvari was scared in public, her hijab making her a target. Maybe she should stop wearing it, to be safe? But fear, she decided, was not a good reason.

Six months later, she was called to the office of the elementary school principal in Chelsea, Quebec, where she taught English. A recent court ruling meant that Quebec’s Bill 21, which prohibits officials in positions of authority from wearing religious symbols, would be enforced in English-language schools in the province. Ms. Anvari would have to take off her headscarf or lose the job she loved.

The decision was once again clear. Even before being asked, she told her apologetic principal, “I don’t want to take it off.” A law that ordered him not to wear the hijab was as reprehensible as a law that forced women to wear it. And what message would that send to his students?

“I always seek to encourage children to find their own identity and grow up on their own terms, and that no one should dictate who they are,” Ms Anvari, 28, said in an interview. “I wouldn’t have been me in my class.”

Why speak out against Bill 21? Because it’s wrong

When asked if she would call herself a political person, she said she is “just a person go about life. But last December, she became a prominent symbol of the consequences of Quebec’s controversial law and renewed a conversation about tolerance and multiculturalism in Canada – a place where Ms. Anvari, an Iranian-Canadian, had once believed that ‘She could wear whatever she wanted and not be judged.

The removal of a beloved teacher from the classroom sparked protests from parents and students, who demonstrated outside constituency office of a provincial politician and tied green ribbons – Ms. Anvari’s favorite color – on the school fence.

At the same time, Ms. Anvari was receiving nasty tweets and messages, including some from people who had found her profile at the University of Ottawa where she was working on a master’s degree in education and volunteering as a mentor to graduate students. The profile said she was born in Iran and spoke Persian, details some used to make their attacks more personal.

It was, she said, a “terrifying” time. “I kept reminding myself that the reaction was more positive than negative.”

One positive point: Ms. Anvari’s manager quickly found a solution. She reassigned Ms. Anvari to teach monthly diversity and inclusion classes to students from kindergarten through college. 6. Working as a school professional – not a teacher responsible for student assessment – ​​Ms. Anvari does not fall under Bill 21.

Five months later, sitting in an Ottawa café, Ms. Anvari is warm and eloquent, reflecting on this difficult time. A cream scarf, one of her favorites, flows freely around her face; she has a silver ring in her nose. She had only started the part-time teaching position at the end of October. It was his first one-year contract in Canada; until then, she worked as a substitute teacher, walking in and out of classrooms. By the time the edict came out of the school board, her presence was already well known: the school had sent home class photos weeks earlier and she had met her students’ parents in interviews with the teachers.

On her way home the day of the director’s meeting, she says, “I cried so much that I couldn’t see the road clearly. At that time, I felt very alone. People didn’t know yet.

One pupil’s mother eventually let it be known what had happened and she became the subject of dinner conversations, with parents forced to explain to their children why Ms Fatemeh was no longer their teacher. She gets emotional as she talks about the support she’s received, including a pile of student cards – many on green paper – declaring she’s ‘wonderful’ and ‘the best teacher ever’ or that “Law 21 should not exist”. ”

She is reluctant to get too deep into the politics behind the law, or Quebec’s most recent Bill 96, which imposes new rules to strengthen the use of French in public services and small businesses. “I just don’t see how it can bring people together,” she says.

In her new role as a teacher, Ms. Anvari leads classroom workshops on topics such as Indigenous rights and Black History Month. Students, she says, are curious and unfiltered, and often surprised by the racism they learn about. “I wonder: at what point in our life does this change, the way we see people?” Or, as she also wondered, what happens to create so much hate that someone would drive a truck into a family just standing on the sidewalk?

In May, for a class on Asian stereotypes, she asked students to pretend not to know her and to write down anonymously the characteristics people might assume of a Muslim woman wearing the hijab. Some of the younger students, she said, were troubled by homework. “I’m not assuming anything,” they told him. Or, “Isn’t it mean to do that?” In the upper grades, some students wrote, “You are from another country. (That’s true for her, Ms. Anvari said, but not for everyone.) “You don’t speak English.” (Maybe, she said, but how can anyone tell by just looking?) She wanted them to learn how stereotypes seep into the way we see people, robbing them of their unique stories.

Ms. Anvari has had her own complicated and unique journey with the hijab. As a first year in Iran, she wore the chador – the black cape that leaves only the face visible – for compulsory school uniform and felt proud to dress like the adult women she looked up to. After her family moved to Canada when she was 10, and wearing it made her different at school and a target for bullies, she took off the chador and kept the hijab, the headscarf.

Her family moved back to Iran when she was 16. By then, the chador was no longer something she wanted to wear; she compromised by donning it for larger family gatherings out of respect, but not in college class, or her first teaching jobs. She dreamed of returning to Canada, where “I could wear whatever I wanted, where I could be me”. At 23, she returned to live with her husband, who is now a PhD candidate in human kinetics at the University of Ottawa. They live in an apartment in Gatineau.

She continued to explore her connection to the hijab. She wondered: was this really what God required – despite what she had learned all her life? Did she want to wear it for herself? She knew women who were forced to wear it, others who described the empowering moment when they took it off for good, and teenage girls who chose the hijab despite their parents’ objections. What were his reasons? She experimented, preferring the loose scarf, letting her hair show.

She acknowledges that many Canadians may see the hijab as a symbol of oppression. But beyond any religious observation, she says, the headscarf is part of her identity. (And if she ever feels different, she says, she’ll take it off.) There were times when she didn’t want “the Muslim woman” to be the first thing people saw when she walked into a room. room. But then she thinks: Why not? Shouldn’t I be that example? A Muslim woman who is a teacher, a student, a wife, a friend, a person. “I’m already marginalized anyway,” she says. “Why should I push myself more to the margins?”

The weekend after the June 6 tragedy in London, Ont., last year, while taking part in an online event of course, she had some sort of epiphany, which would resonate months later: she wouldn’t be intimidated into controlling her own appearance. During a Zoom session, he was asked to share a personal vision of leadership. She found herself crying for the first time since learning about the deaths and thinking about the many ways everyone can lead.

Ms Anvari tells this story in the cafe, going back to the pupils and parents who rallied to her defense in December, who made sure she was not left alone.

“Fights for freedom and justice should not be just the fights of those directly affected,” she said. “Don’t we all have a voice? Can’t we all educate each other just by being a good person in our world? »

Editor’s note: An earlier version of this article misrepresented the notes that Ms Anvari teaches monthly courses on diversity and inclusion.

Our Morning Update and Evening Update newsletters are compiled by Globe editors, giving you a concise summary of the day’s most important headlines. register today.

Schapiro: A payday loan battle that started in Virginia with a whimper, ended with a bang | Columnists

Hijab ban could backfire on governments