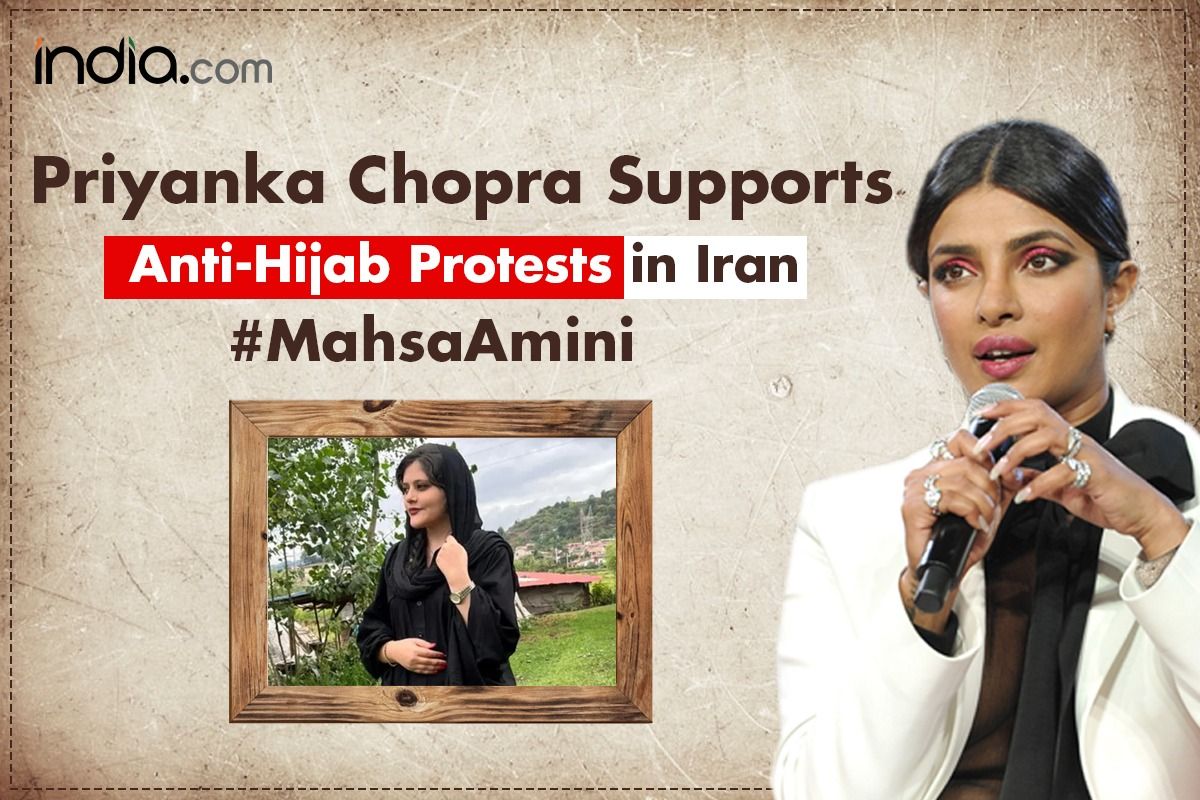 Priyanka Chopra supports Iranian women: Actress Priyanka Chopra who has never failed to discuss or defend a cause has done it again! She expressed her support for the Iranian women taking part in the protests against the death of Mahsa Amini, saying she was amazed by their bravery and motivation. Speaking to her social media handle, she said it was not easy to risk your life, literally, to challenge the patriarchal establishment and fight for your rights. Priyanka Chopra’s Instagram caption read: “Women in Iran and around the world are standing up and raising their voices, publicly cutting their hair and many other forms of protest for Mahsa Amini, whose young life was so brutally taken away by Iran’s morality police for wearing her hijab “inappropriately”. The voices speaking after centuries of enforced silence will rightly erupt like a volcano! And they will not and MUST NOT be stemmed.Also Read – Priyanka Chopra Jonas Interviews US Vice President Kamala Harris in Washington DC, Discusses Pay Equity and Gun Control

She continued, “I am in awe of your courage and purpose. It is not easy to risk your life, literally, to challenge the patriarchal establishment and fight for your rights. But, you are brave women who do this every day, regardless of the cost to yourselves. Also Read – Priyanka Chopra Jonas Welcomes Husband Nick With A Kiss On Stage At Global Citizen Festival – Watch Viral Video

“To ensure this movement has a lasting effect, we need to hear their call, understand the issues and then join in our collective voices. We also need to get everyone who can influence others to join us as well. Numbers matter. Add your voice to this critical movement. Stay informed and speak out, so these voices can no longer be silenced. I am with you. Jin, jiyan, azaadi… Women, life, freedom,” Priyanka concluded. Also Read – Priyanka Chopra Jonas Exudes Boss Lady Vibes In A Blue Pantsuit Worth Approximately Rs 71K – Yay Or Nay?

PRIYANKA CHOPRA EXPANDS HER SUPPORT FOR WOMEN IN IRAN

Netizens praised Priyanka Chopra for supporting women in Iran. Iranian women also dropped thank you messages in the comments section. One of the users wrote: “Thank you for being our voice.” Another user wrote, “We really appreciate it and need all the support we can get.” One also called her beautiful for supporting the cause and wrote: “Thank you my beautiful priyanka we will win.”

Why are women in Iran protesting?

On September 13, a 22-year-old Iranian citizen, Mahsa Amini, was arrested for allegedly breaking Iran’s strict laws requiring women to dress modestly and wear the hijab “in accordance with challenged standards”. Mahsa spent three days in a coma before dying of natural causes, authorities have claimed, but activists believe she was killed with a fatal blow to the head.

Following the tragedy, thousands of Iranians demonstrated against the death of Mahsa Amini. Women around the world have shaved or cut their hair in public or during video recordings to show their support for the plight of Iranian women at rallies and protests.

International protests have sprung up to express outrage over a variety of topics, including the current regime as well as the limitations women in Iran suffer regarding hijabs and other attire.

In addition to Priyanka Chopra, actor Amy Jackson took to Instagram to show support for Iranian women who are currently protesting by cutting off their heads and burning their hijabs. iranian actor Mandana Karimi, who found her fame in Indian industry has been supporting women in Iran. hollywood star Jennifer Aniston expressed his support for Iranian protesters by sharing images of the protests on his Instagram story.

Hollywood actress Angelina Jolie, who is a UNHCR special representative, expressed her admiration for the “brave and fearless” Iranian women. She shared a photo of Mahsa Amini and wrote, “Women don’t need their morals policed, their minds re-educated or their bodies controlled. They need freedom to live and breathe without violence or threats. ”

Other famous women have expressed their support with actions for anti-hijab protests in Iran. French actresses Isabelle Adjani, Berenice Bejo, Juliette Binoche, Laure Calamy, Marion Cotillard, Julie Gayet, Charlotte Gainsbourg, Isabelle Huppert and Alexandra Lamy were among those who shared photos of themselves cutting their hair.

Anti-Hijab protests in Iran have brought together several celebrities to come out and talk about the ongoing protest. What do you think of that?

Presidents of Azerbaijan, Armenia, France and EU Council to meet in Prague