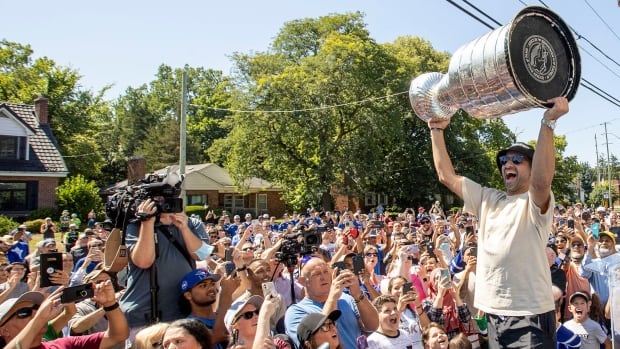 Nazem Kadri walked through the doors of the Muslim Mosque in London on Saturday and lifted the Stanley Cup as he celebrated winning hockey’s highest trophy with his home community.

The 31-year-old won the Cup in June as a member of the Colorado Avalanche and is believed to be the first member of his faith to become an NHL champion.

On Saturday, Kadri made a point of including the Muslim community in the celebration, telling the crowd gathered at the mosque that they were essential to his development as a hockey player and as a person.

The magic moment: Kadri brings the cup to the gates of the Muslim mosque in London. pic.twitter.com/d8XkhhfmF5

“You have supported me from day one, which I always appreciate,” Kadri told the hundreds of people gathered at the mosque in Oxford Street West.

“These are the streets I grew up on, this is the mosque I used to go to, and everything seems to have come full circle. I’m very grateful, very privileged and honored to be the first Muslim to bring the Stanley Cup at the mosque. It’s a big deal. It’s something that I will respect and always remember.

“Encouraging me since the first day I put on skates”

Kadri was born and raised in London. He also played two years of junior hockey with the London Knights before being drafted by the Toronto Maple Leafs in 2009. He played seven seasons in Toronto before being traded to the Avalanche in 2019.

“My friends and family here, they’ve been cheering me on from the first day I put on skates, and it’s very inspiring and very motivating,” he said. “Couldn’t be more grateful to share this moment with you guys. London, Ontario…we are Stanley Cup champions.”

Many speakers acknowledged that London’s Muslim community – around 30,000 – continues to suffer from an attack on June 6, 2021, which killed four members of a Muslim family as they strolled. Police say the family was intentionally shot while standing on a sidewalk in what investigators say was a hate-motivated attack.

Dr. Munir El-Kassem, an imam from the Islamic Center of Southwestern Ontario, spoke at the mosque and alluded to the murder of four members of the Afzaal family, an event that brought politicians to the steps of the same mosque a few days after the attack. in a vigil to denounce hatred and violence.

“We have seen many chapters on these steps,” El-Kassem said. “Most of those chapters were meant to deal with tragedies, the last of which will stay with us forever. But we are a strong community learning to cope. Today we move from that chapter to a chapter of ease which is a gift of Almighty God.”

Some of the speakers also mentioned that Kadri himself had to deliver against racism and Islamophobia as recently as this spring in the Colorado playoffs.

Many of those who circled the streets to catch a glimpse of Kadri said they had been watching him for years. Many are young hockey players from Muslim families inspired to jump into the game watching the forward’s rise.

This fan is a teacher in this Islamic school. Kadri signed his stick. pic.twitter.com/5oNbRzJP2w

Alia Oozeer-Arfeen said she showed up at the mosque to meet Kadri and get him to sign his hockey stick, which he did.

“It’s a very exciting and uplifting feeling to be here,” she said. “It’s something the Muslim community can certainly celebrate. It’s something that will inspire this community…that anything is possible.”

Kadri will have the chance to connect with another Muslim community when the NHL season begins this fall. Last week, he signed a free agent contract with the Calgary Flames.

From the mosque, the Stanley Cup traveled in a parade to downtown. Fans lined the streets, many wearing jerseys from Kadri’s former teams, including the London Knights, Toronto Maple Leafs and Colorado Avalanche. At the park, a crowd estimated at more than 1,000 people sat outside in the sun to watch the celebration.

Upon arriving at Victoria Park, Kadri was given the key to the city by Mayor Ed Holder.

Here, Kadri brings the cup into the mosque. Hundreds of people join the celebration at #ldnont. He is the first Muslim to win hockey’s biggest trophy. pic.twitter.com/wIFSDRzrZL