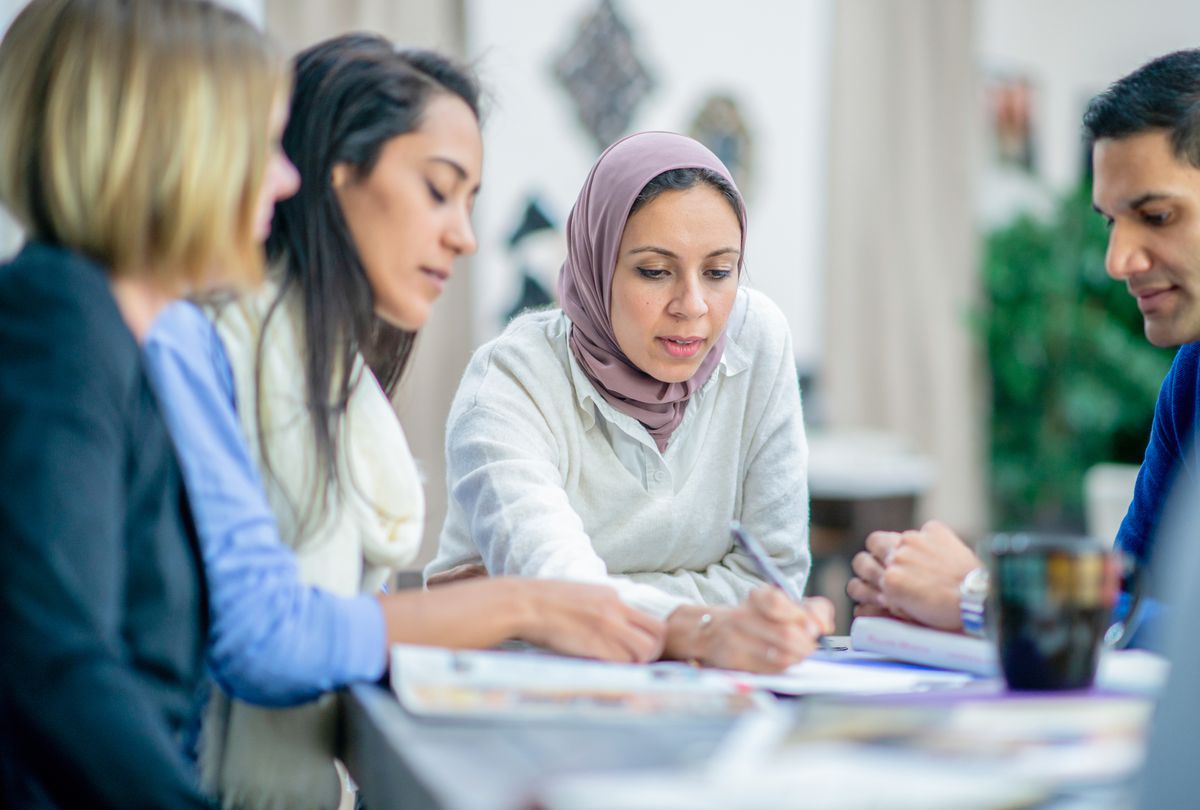 Apart from her skills, qualifications and expertise, Muna Saleh observed an additional factor that people value to determine her “professionalism” – her hijab.

Wearing the hijab is a personal religious decision, but many Muslim women in Canada face undue professional consequences for exercising their right to wear what they choose.

“For some people, the hijab is inherently considered unprofessional on its own,” says Dr. Saleh, who is an assistant professor in the faculty of education at Concordia University in Edmonton.

Dr Saleh says women who wear the hijab are stereotyped as being “inherently oppressed, potentially not smart enough or able to make an informed and rational decision about their bodies”.

Shefaly Gunjal is the Head of Equity, Diversity and Inclusion (EDI) at Citizen Relations, a global communications and public relations firm. She notes that an additional challenge for Muslim women who wear the hijab is that they are often the only visibly Muslim person in their workplace. For this reason, they may be subject to increased surveillance.

“You kind of become the beacon of religion, where people bring all their assumptions about Muslims to you,” she says. “It can be a bit overwhelming.”

Ms Gunjal says visibly Muslim women in the workplace may experience a “lack of power and privilege” at the intersection of race, gender and religion. This, she says, comes with incorrect assumptions that take away the agency.

“I can tell you from personal experience that the hijab is really a choice that I made and celebrated for myself, and I was really excited about it,” she says.

The challenges of navigating the workplace as a hijab-wearing woman are even more complicated in Quebec, where the hijab is explicitly banned in certain professions. The continued imposition of secularism legislation known as Bill 21 bars people in many public sector jobs from wearing religious symbols.

In 2021, Quebec elementary school teacher Fatemeh Anvari was removed from her job because she wore the hijab. The case was indicative of broader issues affecting the careers of Muslim women in Quebec.

“In Canada, when a woman decides she’s ready and wants to wear the hijab, she can’t just think about the religious ramifications,” says Lina El Bakir, Quebec-based advocacy officer with the Council of Canadian Muslims (CNMC). “She also has to think about the opportunity cost of her career, her dreams, her aspirations. [Also] their ability to resist discrimination on the street and to access services.

The NCCM is working on a legal challenge alongside the Canadian Civil Liberties Association (CLAC), arguing that the bill is unconstitutional. As the case unfolds in court, Ms El Bakir says she has heard of hijab-wearing women whose potential career opportunities have been blocked. In some cases, she says, women are forced to choose between their religious beliefs and their livelihoods.

“We’ve had testimonials from students at universities studying education who decide to take off the hijab because they feel like they can’t be themselves while they’re teaching,” Ms. Al-Bakir. “They have to make this heartbreaking decision, to compromise part of your identity in order to fit into a society that discriminates against you.”

In Quebec, work barriers faced by visibly Muslim women are enshrined in law. But Ms. El Bakir stresses that the problem goes beyond the borders of the province.

“There are families who left Quebec thinking that Ontario would be safer, or other provinces, but the discrimination still exists,” she says. “It is important to know that yes, Quebec has Bill 21, but unfortunately Islamophobia knows no borders.

When it comes to making workplaces more inclusive for Muslim women or other marginalized people, Ms Gunjal says efforts must extend beyond “surface-level” change.

In her past experiences working in IDE, she says she was often asked questions about her experience that seemed performative. In her current role, however, she says she feels like she’s having conversations that stem from a genuine desire to create a safe and welcoming workplace.

“[When] looking at your culture as an organization, it’s not just about having representation or diversity,” says Ms. Gunjal. “It’s about creating an environment where people from diverse backgrounds feel comfortable being themselves.”

For Dr. Saleh, becoming comfortable in his professional appearance has been a process. She says that due to the assumptions she faced as a visibly Muslim woman, she often found herself compensating by trying to appear particularly well-prepared.

“You’re very hyperaware of how you look, how you present yourself, and what that might read to others,” she says. “All of these things are constantly negotiated.”

She notes that there is a “very fixed and static notion of what counts as professional and what looks professional”, and she has sometimes internalized these expectations. It’s something she works to disrupt.

“For me, a lot of what I’ve tried to undo is this notion that I have to be very, you know, sharp,” she says. “You don’t want to be perceived as ‘less than’ in any way. I’m ashamed to say that when I started I was really aware of that.

Now that she teaches in a university setting, Dr. Saleh says she’s reached a point where she feels comfortable wearing jeans to work.

“It was progress for me,” she says. “It’s been a process of saying, hey, the way you look or how you dress — whatever those static conceptions of professional attire — don’t give an indication of how well you can do your job.”

A question about your professional life? Email us at [email protected].

Question: I left a job on bad terms. I’m applying and interviewing for new positions, but how should I manage my job search? I worked for my former employer for 8 years and am good at what I do, but I don’t believe I will get a good reference from them. And I wonder what to reveal in interviews about my former employer.

We asked Crystal Henrickson, career and leadership coach at Talent Collective in Vancouver, BC to field this one:

Good for you to know your skills and value as an employee when looking for a job. Your ability to speak clearly about these skills and explain how you would apply them to solve the problems your potential employer is facing can help steer interviews to the future rather than the past.

Unfortunately, no amount of future focus can prevent the dreaded “Why did you leave your old role?” question. When asked, it’s best to answer directly without going into too much detail, while focusing on what you’re looking for in a new role.

While work allowed me to exercise [specific skills]I recognized that [‘the direction of the organization’ or ‘the culture’ or ‘a sense of belonging,’ etc.] were misaligned with my [‘values’ or ‘career goals’]. In my next role, I am looking for an environment where I can use my [specific skills] and work with teammates who appreciate [specific values or specific characteristics of culture] in the realization [specific outcomes in the role/organization].

Write down the details, customize the script, and practice saying your answer out loud. Try to have a neutral to positive tone.

The best references are people who can speak to your abilities, work style, and personality. Consider expanding your scope of potential referrals from your direct manager to others, such as peers on your own team or other teams, former managers who have moved to other organizations, cross-functional work groups , former customers or customers.

Also consider external relationships that might provide insight into how you are as a teammate, how you handle conflict, or deal with stress. Some examples include volunteer roles, committees and sports teams.

Wishing you good luck in your job search!

Want to know more about women at work? Find all the stories on the hub hereand subscribe to the new Women and Work newsletter here. Feedback on the series? Email us at [email protected].