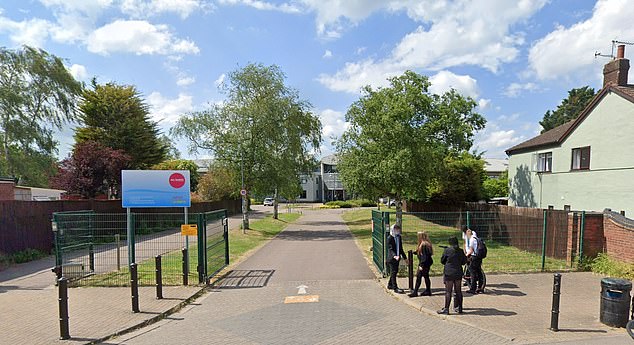 Furious Muslims have expressed their anger after a high school religious studies teacher used a photo of Osama Bin Laden to depict the Prophet Muhammad – an act akin to comparing the pope to Jimmy Savile.

The teacher at the Church of England’s All Saints Academy in Dunstable, near Luton, has now been suspended after Year 10 pupils saw the image during a Power Point presentation on Friday.

After the use of the image was brought to the attention of the academy by a concerned pupil in the class, the school apologized and pledged to bring in an “outside person” to investigate.

But outraged Muslims, many of whom view any portrayal of their prophet as deeply offensive, accuse the school of “Islamophobia” and say the incident reveals “pure hatred” for their religion.

Akbar Dad Khan, a community leader from nearby Luton who attends the town’s Central Mosque, said putting the name of the Prophet Muhammad next to a photograph of Osama bin Laden had been compared to the name Jimmy Savile appearing under an image of the pope.

Mr Khan, chairman of a community group called Building Bridges, said: ‘I have had conversations with young people about this and they are very angry. They believe it was done deliberately to defame Islam and the Prophet Muhammad.

“To put the name of the Prophet alongside an international terrorist is to link Islam very directly to terrorism. It is condemnable and must be condemned.

All Saints Academy in Dunstable, outside Luton, has apologized for using a photo of Osama bin Laden to depict the Prophet Muhammad

The deputy editor of the Muslim community news site 5 Pillars, Dilly Hussain, wrote to the school: ‘Your apologies and the teacher’s short-term suspension aside, the Muslim community wants answers : how was a photo of Osama bin Laden used to represent the name? of the Prophet Muhammad?’

He continued: ‘It is right for the school to suspend the teacher concerned and carry out a full investigation. He must be impartial. The school acted quickly and issued an apology, which is the right thing to do.

“SIX QUESTIONS THAT MUST BE ANSWERED”

The Muslim community news site 5 Pillars is asking for answers to six questions regarding the circumstances of the incident.

The six questions they want to answer, published on the 5 Pillars website, are:

The school, which has around 700 pupils aged between 13 and 18, says it has a Christian philosophy and “very useful” links have now been established with the Muslim community in Luton.

The Muslim community news site 5 Pillars, which has more than 400,000 subscribers, is now asking for answers to six questions about the circumstances of the incident.

Deputy editor Dilly Hussain wrote at the school: “Your apology and the teacher’s short-term suspension aside, the Muslim community wants answers: How did a photo of Osama bin Laden go was it used to represent the name of the Prophet Muhammad?”

‘[We want] full timeline and details, [including] everyone who was aware and involved.

A social media post directed to the school’s Twitter page reads: ‘Absolutely despicable. It’s hard to see this as anything other than malicious! This must be investigated as soon as possible!’

Another said: “All I see is pure hatred against Islam and all Muslims here. I don’t see any errors… If you just removed the content then you don’t really see the seriousness of this offense It means that your views are not too far removed from those of the offender.

A third said: ‘Disgusting. You are clearly an Islamophobic school, ignorant and pusillanimous. I hope the world will see how disgusting you are.

In a statement, the school said it was “completely inappropriate” to use the image and that it “acknowledges the profound pain and distress” caused.

They said: “Not only was it offensive to attempt to portray an image of the Prophet Muhammad, but the image that was used was of Osama bin Laden, a terrorist leader, which added to the deep insult.

“The academy reiterates its sincere and unreserved apologies for the distress caused by this episode.”

It is not yet known how the image of the leader of Al-Qaeda ended up in the PowerPoint presentation.

Muslims, many of whom consider any depiction of their prophet to be deeply offensive, accuse the school of ‘Islamophobia’ and say the incident reveals ‘pure hatred’ for their religion

In Islam, it is deeply offensive to depict the Prophet Muhammad as it is considered similar to forbidden idol worship.

The use of the image was brought to the attention of the Academy by a concerned student in the 10th grade class.

After suspending the teacher, who has not been named, the school said it would also undertake a review.

When last inspected by OFSTED – the school’s regulator – in 2019, it was described as “in need of improvement”.

“We are fully aware of a totally inappropriate resource that was used by a teacher during an SR lesson.

“All Saints Academy recognizes the deep pain and distress that has been caused to the Muslim community and many other people of faith by the totally inappropriate images that were used as part of a recent SR lesson. Not only was it offensive to attempt to portray an image of the Prophet Muhammad, but the image that was used was that of Osama Bin Laden, a terrorist leader, which further compounded the deep insult.

“The Academy reiterates its sincere and unreserved apologies for the distress caused by this episode. In terms of actions taken, we are pleased to share the following information.

“After learning of this incident from a concerned student, the staff member has been immediately suspended by the Principal pending a thorough and prompt investigation which will follow the Academy’s disciplinary procedures. It would be against the terms of this procedure to identify the person concerned or make any further comments until the final outcome is determined.

“As well as investigating the actual incident, we will also be commissioning a broader review of the circumstances surrounding the case to determine how this individual came to act in such an inappropriate and upsetting manner. For the sake of transparency, this examination will be carried out by an external person who has no connection with the Academy.

“Finally, having now established very useful links with members of the Muslim community in Luton, we hope to work together to better understand the religious and cultural issues that impact all of our lives and will help us to be better educators.”

Fasseas ’23: France’s sports hijab ban must be seen for what it is – gendered Islamophobia