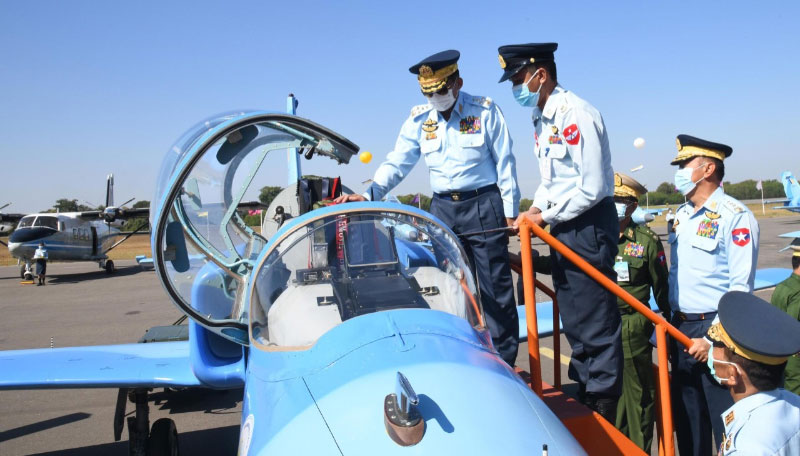 The NGO Justice For Myanmar is calling for an investigation and a global embargo on weapons and military planes sold to the Burmese junta which illegally seized power in a coup in February.

The appeal was launched on December 17 as the NGO outlined in a report how members of the UN Security Council, including France, Russia, China, the Netherlands and Italy, are directly involved in supporting the Burmese junta, which currently uses some of this equipment to target its own people, mainly in ethnic areas, but also in an increasingly wide range of divisions and regions.

The appeal comes as junta leader Min Aung Hlaing attended a commissioning ceremony for planes and helicopters on Wednesday this week at a ceremony marking the 74th anniversary of the Tatmadaw (Air).

During the ceremony at the flight training base of Meiktila Station, Commander-in-Chief (Air) General Maung Maung Kyaw praised the commissioning of the planes and helicopters. In his speech, Chief General Min Aung Hlaing said that it is necessary to build the Tatmadaw to be strong, capable and modern armed forces, according to Myanmar government media.

As multipurpose fighter jets were modernized and more fighters, transport planes, helicopters and gunships were added to the Tatmadaw (Air), its ability could be improved to control the Myanmar aerospace territory.

As Justice For Myanmar points out in its latest report, several countries, companies and SWFs are doing a lot to support the defense and attack capabilities of the Burmese junta at a time when others, notably the United States, the United Kingdom United and Canada, impose sanctions in the attempts to reduce the capacities and the incomes of the junta.

As the NGO notes, the Burmese army commissioned planes made in France, Russia and China, during the anniversary ceremony held on Wednesday.

The planes include an ATR-72 600, an Airbus Eurocopter, a Y-12, Yak-130s and K-8s. The ATR-72 600 are manufactured in France by ATR, a French-based joint venture between Airbus and the Italian Leonardo Corporation. Eurocopters are also made in France by Airbus. The head office of Airbus is located in the Netherlands.

Justice for Myanmar said the plane was ordered by EU-sanctioned war criminal and junta leader Senior General Min Aung Hlaing as the Burmese military escalates its campaign of terror in the wake of the brutal and illegal coup attempt in February. In recent weeks, the junta has carried out indiscriminate airstrikes in Kachin and Shan states and Sagaing and Magwe regions, killing civilians, destroying property and causing massive displacement. Previous air raids had also targeted Chin, Karen and Karenni states. These attacks constitute war crimes and crimes against humanity.

The European Union has imposed an arms embargo on Myanmar, with a ban on the transfer of dual-use goods, although the Burmese military is used to bypassing arms control through its network of brokers private and airline companies run by friends.

Justice For Myanmar spokesperson Yadanar Maung said: â€œThe governments of France, the Netherlands and Italy must immediately investigate how the ATR and Airbus planes fell into the hands of Myanmar’s terrorist military junta. These planes will be used by the military to attack civilians and kill children. The fact that the military continues to procure planes must be a wake-up call to the European Union, which has not imposed new sanctions on Myanmar since June. This contrasts with the US, UK and Canada, which targeted entities linked to military procurement in the latest round of sanctions. France has a special responsibility as a permanent member of the UN Security Council and should lead the campaign for a global arms embargo against Myanmar. It is unacceptable that the junta is still able to procure European planes after the 2017 genocide against the Rohingya, their illegal coup attempt and the continued acts of terrorism.

The K-8 and Y-12 are manufactured by subsidiaries of the Chinese state-owned company AVIC. The K-8s are produced by AviChina Industry and Technology Co. Ltd, a Hong Kong-listed subsidiary of AVIC, connecting AviChina investors to AVIC’s complicity in Myanmar’s military atrocities.

Yak-130s are manufactured in Russia by the state-owned United Aircraft Corporation.

Justice For Myanmar spokesperson Yadanar Maung said, â€œChina and Russia are aiding and abetting the junta’s war crimes and crimes against humanity by selling planes, profiting from the murder of the Burmese people. The fact that two permanent members of the UN Security Council with veto power are arming the terrorist military junta explains why the highest UN body has totally failed to take meaningful action against Myanmar. The international community must take action against Russian and Chinese complicity in the atrocious crimes committed by the Burmese military.

Alarmingly, sovereign wealth funds and large international corporations continue to invest in AVIC, despite clear evidence of their complicity in war crimes and crimes against humanity committed by the Burmese military. We demand that AVIC shareholders immediately divest themselves to end their connection to the crimes of the Burmese military. The international partners and suppliers of AVIC and United Aircraft Corporation also have a responsibility to prevent human rights impacts associated with their business relationships. We call on them to immediately sever ties with AVIC and United Aircraft Corporation. “

What is becoming increasingly clear is that a number of countries continue to support the Burmese junta with arms and related materiel, as well as the training that goes with it.

A source in Naypyitaw recently noted that the Burmese military had purchased chemicals, ammunition, detonators and accessories from NORINCO, China. A ship carrying the equipment left the port of Dalian in China on December 12 and will arrive at the port of Thilawa, to be subsequently transported to military bases in Myanmar.

In addition, 30 Myanmar officers and 15 other personnel are scheduled to undergo mine clearance training from February to May 2022 in Pakistan, according to a statement from Myanmar’s military attachÃ© in Islamabad. A Pakistani team reportedly arrived in Myanmar on December 3 to advise on demining in northern Rakhine and Chin states of ammunition planted by the Rakhine Army (AA). Pakistani personnel will assist with mine clearance in Rakhine State and Paletwa County, Chin State.

While it is well known that military aid is provided to the Burmese junta by China and Russia, military aid provided by countries such as France, the Netherlands, Italy and Pakistan is less obvious. .

Musashino City Council: Listening to Citizens, Acting in the Interest of National Security