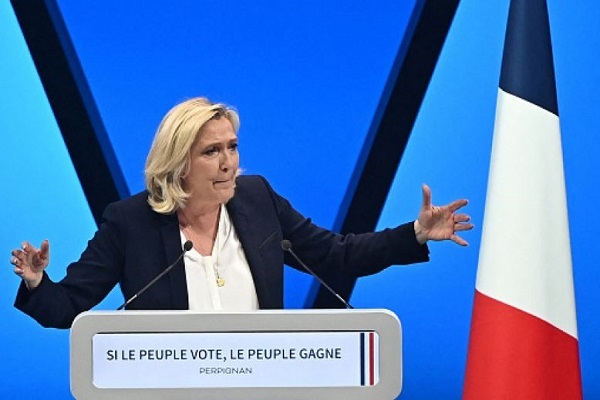 TEHRAN (IQNA) – Far-right French presidential candidate Marine Le Pen announced on Thursday that if elected in the presidential election, her government would impose a fine on women wearing the Islamic headscarf.

Le Pen made the announcement during an interview with radio station RTL, where she said that a majority of the French population “supports banning the hijab in public”, and compared the introduction of a penalty on the scarf to a fine for not putting on a fastened seat belt.

“It is a measure demanded by the French, 85% of the population wishing to no longer see the wearing of the headscarf in the street”, she declared.

“[French people] understood that over the past two decades, the headscarf has been used by Islamists as a uniform, as an advanced demonstration of fundamental Islam,” Le Pen said.

However, the presidential candidate, who was recently photographed with a hijab-wearing girl during her election campaign, insisted that no one would be arrested for wearing the headscarf, despite her proposed ban.

Le Pen is the leader of the National Rally, formerly known as the National Front, which was founded by his father Jean-Marie Le Pen.

The party is known for its far-right and anti-immigration rhetoric.

Despite her previous attempts to “de-demonize” the party, Marine Le Pen has been accused of making racist remarks for many years.

In 2010, she compared Muslims performing prayers in the street to the Nazi occupation of France during World War II.

In 2021, she was tried for breaking hate speech laws when she tweeted graphic images of Islamic State atrocities, in response to the 2015 Paris attacks. She was later cleared of all charges. the charges.

French election campaigns have been marked by heightened Islamophobia from candidates of most political parties, including far-right candidate Eric Zemmour.

Current President Emmanuel Macron has also proposed several policies aimed at religious freedom, with Muslims being the most affected.

The first round of voting is expected to take place on Sunday, with Le Pen and incumbent President Macron expected to advance to the second round.