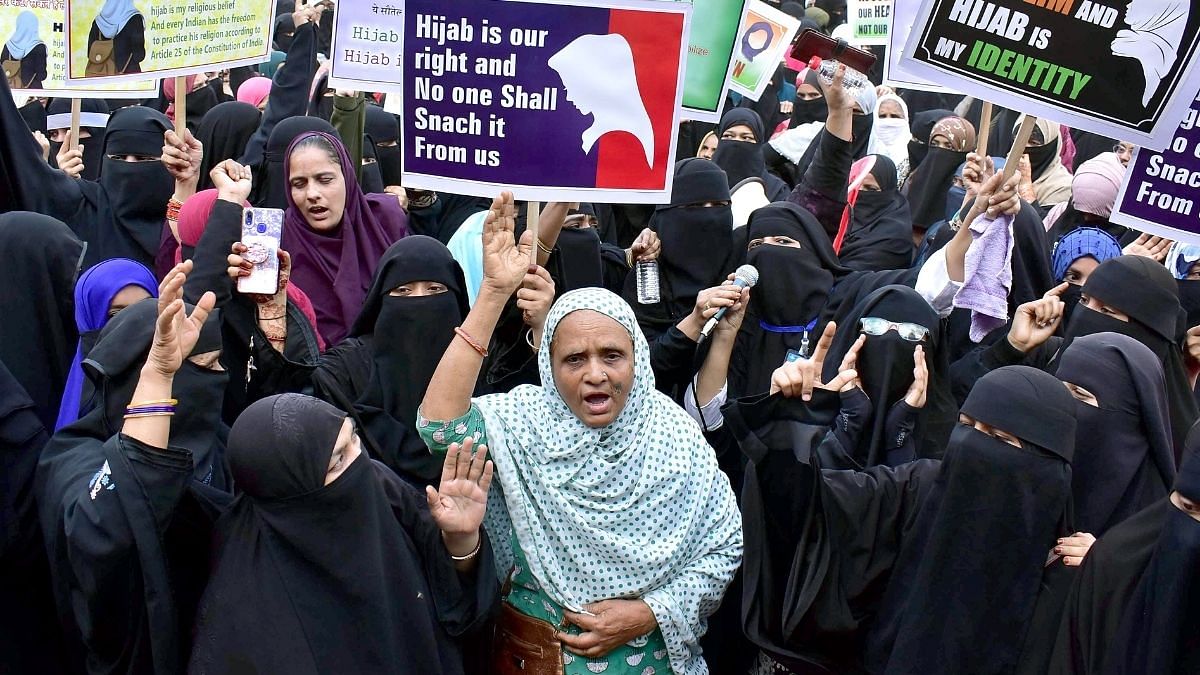 Is the hijab a choice? India cannot defend secularism on the razor’s edge, like France

IDoes the government of Karnataka practice “laïcité”, like France, which banned the veil and other religious symbols in public institutions as early as 2004? Should the Basavaraj Bommai government of the Bharatiya Janata Party in Bangalore be condemned for mocking the European Union’s highest court, which last year authorized companies to ban the wearing of headscarves at work? As for the Islamic Republic of Morocco, in 2017 it banned vendors and manufacturers from selling the burqa – a ban on wearing the hijab dates back to 2004.

This column is not about Saudi Arabia, where recent reforms introduced by Mohammad bin Salman mean women no longer need to wear the full black covering or “abaya” in public, can drive, go to the cinema, travel to abroad and live independently – arguably, Saudi Arabia remains one of the most conservative countries in the world.

In Gulf countries like the UAE, it’s anathema to criticize ruling sheikhs, but it’s their fatwas that have transformed Dubai into a shimmering Manhattan of the East, where women can wear whatever they want, including at the beach. In fact, since the 2020 Abraham Accords signed with former enemy Israel – and overseen by the United States – the United Arab Emirates has become a preferred tourist destination for Israel.

This column also does not apply Pakistanwhich seeks in theory to follow Muhammad Ali Jinnah’s 1947 saying on freedom of religion (“you can return to your temples and mosques…”), but in practice has banned valentines day celebration by insisting that women not only wear the black abaya but also black gloves, while men must don white prayer caps.

Or about Afghanistan, where the Taliban brought back the full blue burqa with a vengeance – girls and women can’t go out in public without a burqa or at the bare minimum, a hijab.

One of the most interesting examples of the state overturning its own dictate on the hijab is Turkey. When the Ottoman Empire fell after World War I, Kemal ‘Pasha’ Atatürk sought to lift Turkey out of the darkness of the past and force-feed it into the future – among his experiments was the 1925 Reform Decree clothing, including the ban on the hijab. More recent Turkish leaders, such as current President Recep Tayyip Erdogan, have leaned towards the Islamists; when he was prime minister in 2013, Erdogan made sure to rescind Atatürk’s 1925 decree on dress regulations.

As the Karnataka High Court hears the argument over whether or not female students should be allowed to wear headscarves or hijabs in their schools and colleges, it is interesting to see how countries elsewhere in the world have dealt with issues similar. What happens when religious tradition collides with the secular state?

Read also : The real problem in Karnataka’s hijab row is how ill-defined secularism is – Nehru to Modi

‘Secularism’ on the front

France has been at the forefront of this international debate for several years. He invokes a concept called “secularism,” which translates to a harsh brand of “secularism” that does not tolerate any argument on the equality front.

Crossing ideological lines, the state invoked tough measures in France to ban the full burqa in 2004, also known as the “veil law” – it prohibits the wearing of any “ostentatious” religious item, including the Islamic veil , the Jewish yarmulke and large Christian crosses — by centre-left Jacques Chirac; the facial veil, or niqab in 2011 by the right Nicolas Sarkozy.

In 2021, the French Senate pushed for an amendment to ban the headscarf for anyone under the age of 18, as part of an “anti-separatism bill” pushed by the government of President Emmanuel Macron. The amendment also provided for the ban on the headscarf during school outings as well as the ban on the “burkini”, the full swimsuit.

The French amendment, which led to the Twitter hashtag #HandsOffMyHijab trending for several weeks, follows the beheading of Samuel Paty, a teacher in the Paris suburbs in October 2020, by a Chechen immigrant.

Macron responded shamelessly by describing the knife attacks as a wave of “Islamic separatism” and then announced a series of public debates to defend “laïcité” – or the strict separation between church and state, which has been a feature of French politics and society since 1905.

“Laïcité” doesn’t mean the state isn’t involved in the lives of the French Catholic population — in fact, it funds both historic churches like Notre-Dame and Catholic schools. But the concept came to the fore again during North Africa’s freedom struggles against the French colonial empire in the 1960s, when Muslims in those countries – including headscarf-wearing women and children – arrived in large numbers in France.

Fast forward to the 2005 publication of a cartoon of the Prophet Muhammad in a Danish newspaper, which created an uproar across Europe; in 2011, the Sarkozy-inspired law against the niqab gave rise to riots throughout France; in 2015, the satirical magazine “Charlie Hebdo” in Paris was attacked because it caricatured the Prophet and 12 people were killed; in 2020, Charlie Hebdo republished the cartoons to mark the trial of the attackers, causing enormous anger in the Muslim world.

Shortly after the Charlie Hebdo attacks, Austria, the Netherlands and Belgium passed laws banning the niqab, while in 2016 then German Chancellor Angela Merkel declared that the Wearing the full veil should be banned wherever “legally possible”.

Significantly, France and Germany have around five million Muslim citizens in their countries – in 2020, following the murder of Samuel Paty, 79% of respondents said that “Islamism had declared war” to France.

Macron, fully aware that he is fighting an election this year, said at the time: “Samuel Paty was killed because the Islamists want our future and because they know that with silent heroes like him, they will not will never have it”.

Read also : In Karnataka, it’s not about Hijab, it’s bigotry and apartheid

Perhaps the biggest difference between the French and Karnataka versions of ‘secularism’ is that in France the public display of all religious symbols, be it the hijab, turban or Christian cross , is not authorized ; this is why the State believes it is right to enforce such a ban in the public sphere.

In India, by contrast, the more elastic version of “secularism” did not mean the end of religion in the public sphere, but the coexistence of the two. It is the limits of this coexistence that are on the table in the High Court of Karnataka these days.

In 2014, a poll of disenchanted Muslim populations in Europe by the Russian news agency Rossiya Segodnya found that 15% of France, 7% of Britain and 2% of the German population had a positive image of the Islamic State terrorist group. According to The Washington Posteven though the numbers weren’t really that high, they were quite high – he cited dozens of fighters from these nations as well as other European nations (notably Belgium) pouring into Syria and Iraq to support ISIS .

By contrast, although India is 14% Muslim, only a handful of people have been driven to fight the so-called holy wars in Afghanistan and the Levant.

So, is wearing the hijab a matter of choice or not? Can you defend the concept of secularism on the edge of the knife, as the French did, or is it counterproductive? As the Karnataka High Court hears the matter, the experiences of nations abroad on whether, how and to what extent to cover women can be instructive.

Jyoti Malhotra is a consulting editor at ThePrint. She tweets @jomalhotra. Views are personal.

THE COUNCIL OF THE EU APPROVES AID OF 1.2 BILLION EUROS TO UKRAINE

“Women without hijab at risk of rape in India” commentary for Muslim men: Kalladka Bhat