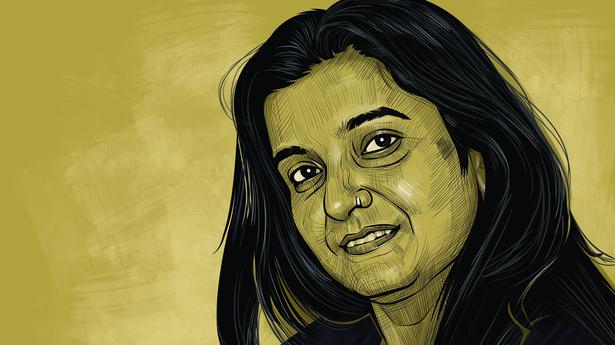 I see the pitfalls of supportive practices such as the hijab: Noorjehan Safia Niaz

Instead of talking about real issues like education, rights or livelihoods, we let the narrative be hijacked by the right, says activist and co-founder of Bhartiya Muslim Mahila Andolan

Instead of talking about real issues like education, rights or livelihoods, we let the narrative be hijacked by the right, says activist and co-founder of Bhartiya Muslim Mahila Andolan

Noorjehan Safia Niaz, co-founder of the Bhartiya Muslim Mahila Andolan (BMMA), is a prominent voice in the discourse on Muslim women’s rights. Formed in 2007 and with over a lakh female members, BMMA has actively campaigned for legal reforms and was one of five petitioners in the triple talaq case, in addition to filing petitions against polygamy and the nikah halala. The BMMA has also pushed for the codification of Muslim personal law based on the Constitution and a feminist interpretation of the Quran. His work has not been easy, especially with the setback of part of civil society. As the hijab controversy rages on, Noorjehan shares BMMA’s stance. Excerpts:

What do you think of the hijab controversy in Karnataka universities?

What is happening in Karnataka is a very right-wing Hindutva stance against the [Muslim] community. They have been doing it for many years, be it the “Corona jihad” or the lynching episodes. the [Muslim] community has been pushed to the wall. How can you prevent students from entering [college] local? They have the right to education. While schools have the right to determine what their uniform should be, before enforcing a decision, why couldn’t we discuss with all stakeholders? Obviously, because the goal was to communitize, polarize and push the community to its limits.

Does BMMA oppose the hijab as a statement of identity or that the hijab is essential to Islam?

Feminists have questioned the patriarchal and misogynistic logic behind the veil, the ghoonghat. The hijab cannot be reduced to a question of identity or community. There are surely other ways to affirm one’s identity. That the hijab is essential to Islam is also a superficial and reductionist understanding of the religion. Islam is not about the amount of my head covered, the length of my sleeve, the length of my abaya. Islam is synonymous with equality, justice, wisdom, compassion, prayers, fasting; it is these values ​​that are the basis of Islam. What is missing in current debates is the spiritual and cosmological understanding of Islam. The vicious propaganda of the right against the community does not help either.

The problem lies in [men’s] Interpretation of religious texts. When we started to read the texts, we realized that the triple talaq does not exist. On polygamy too, there is a verse [in the Koran] who says you can marry more than one wife. But in the same chapter, another verse says that even if it is your burning desire to treat them equally, you cannot, so marry only one.

Can the hijab then be considered a voluntary rather than an imposed cultural practice?

The community is diverse, the practices too. But over the last decade, I’ve noticed three-year-olds, five-year-olds having to wear a hijab – where’s the choice in that? Even with adult women, do families really give them a choice? But where is the space to discuss these innumerable aspects in such a polarized atmosphere?

Coming from the community, I can see the pitfalls of supportive practices like the hijab. I remember several instances where I had complete strangers – young and old men, and once a younger woman – approached me in public and questioned my choice of dress. Impunity, the audacity with which your personal space can be violated!

My sister lives in Bhendi Bazaar – Mumbai’s oldest Muslim ghetto – and may be the only one wearing a saree. Women came to her house and told her she shouldn’t wear it.

Even when the BMMA opposed triple talaq, you were rebuffed by various women’s groups…

It is understandable that religious groups oppose us. But secular and liberal feminist groups opposed us and openly condemned our work. Even in the triple talaq debate, they did not support Muslim women’s demand for just and humane family law. Instead, they chose to side with conservative religious groups in the [Muslim] community. This time too, these groups – with the exception of Shabnam Hashmi – took the position of reinforcing hijab as a matter of identity. They need to look within; to the damage they cause to the cause of Muslim women.

We must oppose all fundamentalisms. Why can’t secular feminist groups say that even though we are with you [those fighting to be allowed to wear the hijab], we disagree with you? Why not say “I support Muslim girls for their right to an education, but that’s not what you should fight for”?

We are clear that we do not support Hindu fundamentalists. But we also keep our distance from this narrative [that hijab is essential or part of our identity]. Feminist groups have the privilege of language and the ability to take a stand. So why not now? Not every situation is black and white, there are shades of gray.

Tell us about the BMMA’s longstanding demand to codify Muslim personal law?

In 2037, it will be a century of depriving the Muslim community of a codified law. We received snippets — Dissolution of Muslim Marriages Act, 1939; Shah Bano [Muslim Women (Protection on Divorce Act), 1986]; and now, triple talaq. Hindus, Christians, Parsis, all religions have seen their personal laws codified. But whenever we raise questions, we are told ‘the time is not right’ or ‘why are you bringing in religion’, ‘why do you need separate laws’? So the Muslim woman shouldn’t raise her issues?

We don’t go to a political party, parties come and go; we approach institutions such as the courts and Parliament. Today is the BJP, but what did Congress do [during Shah Bano]? Or, for that matter, what was the Shiv Sena doing 30 years ago? We cannot forget what they did to us, nor can we let them forget.

Have secular feminist groups broken their engagement with the government? Don’t they pay taxes? Weren’t they happy when homosexuality was decriminalized by this government? But when we talk about legal reforms for the community, we are told that we are the minions of the government!

Now the government wants to raise the age of marriage for girls from 18 to 21. If the bill passes, will the law apply to her? [Muslim woman] or will religious laws that allow marriage at 15 apply?

You say that issues such as the hijab divert attention from the real concerns of Muslim women. What are these issues that we need to talk about?

We constantly talked about education and livelihood issues. We just opened a daycare in a neighborhood outside of Mumbai; parents had to pay a small fee to use it, but they can’t even afford it. In our training programs, women are asking for jobs. During the last lockdown, we organized scholarships for so many children.

What about global positions on the hijab, like in France, for example? Are there lessons to be learned from this?

It takes deeper introspection. In a multicultural society with people of various faiths, there is always a need for give and take, adaptations and accommodations. But even as we condemn the right-wing and ultra-secular approach of the French government, what are we doing with ourselves, with our religion? Why haven’t we addressed some issues in the community, instead allowing the right to hijack the agenda?

The author is a Fulbright alumnus and director of the Alliance for the Advancement of Knowledge and Dialogue.