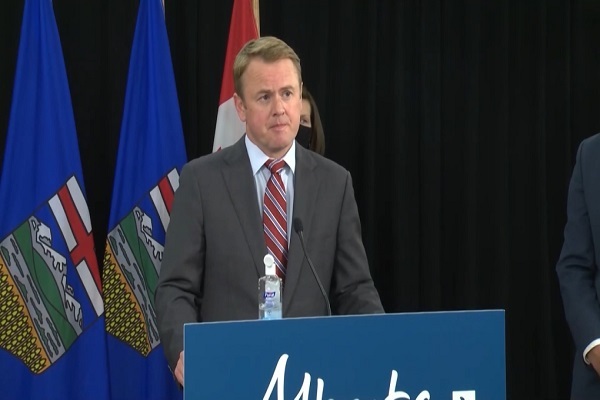 The office said it’s Shandro who hires and fires.

“The commission has no information to share regarding the status of Collin May’s resignation,” the Alberta Human Rights Commission said in an emailed statement Tuesday.

“The Minister of Justice and Solicitor General is responsible for managing who is appointed head of the commission and the courts.

It’s the latest twist in a problem that beset Collin May even before he was officially named head of the commission in July.

At the time, critics pointed to a book review he wrote in 2009 and said the article raised concerns that May was Islamophobic and therefore unfit to lead the commission charged with ensuring that that Albertans are not discriminated against.

May responded in a statement, outright rejecting the Islamophobic allegations and promising to “commit to continuing my personal education on Islam and all faiths.”

“I will be meeting with leaders of the Muslim community in Alberta to learn more about their experiences in Alberta and to work to overcome discrimination against the Islamic community,” he added.

Things came to a head on Monday when the National Council of Canadian Muslims released an open letter accusing May of not meeting despite repeated attempts to contact him.

The council said May’s intransigence cast doubt on her commitment to learning and reflection, and her letter was signed by 28 Muslim community groups.

Hours later, Shandro’s office released a statement reiterating that May had promised more than two months ago to meet with the Muslim community.

The statement did not specify the conversation or what specifically triggered the call to quit.

Said Omar, spokesman for the Muslim council, said he was glad Shandro had called for the resignation.

He said May hadn’t contacted the group since he sent the letter, and that it might be too late for him to mend the fences anyway.

“We’re always open to meeting individuals and trying to reconcile, but I think at this point the community has spoken,” Omar said in an interview.

May, a Calgary lawyer, was appointed to the commission in 2019. In past years, he has written articles for C2C Journal, an online and print publication focused on political, cultural and economic issues.

In June 2009, he reviewed Efraim Karsh’s book “Islamic Imperialism: A History,” which examines the cultural forces and attitudes that have shaped the religion.

In a line of criticism, May notes that the book states that “Islam is not a peaceful religion misused by radicals. Rather, it is one of the most militaristic religions known to man, and it is precisely this militaristic heritage that informs the actions of radicals across the Muslim world.

The council of Muslims focused on this paragraph in its criticism, calling it a “shocking” and stigmatizing stereotype.

Opposition NDP Justice Critic Irfan Sabir echoed the call for May’s dismissal, saying Monday: “Muslims in Canada are targets of harassment, assault and murder only because of their faith.”

However, May and the editors of her article disagree.

May, in his July statement, said, “I want to make it clear that I do not believe in or accept the characterization of Islam as a religion or a militant movement.”

C2C Journal editors George Koch and Peter Shawn Taylor, in a rebuttal posted on its site in July, said May had made it clear that this was the view of the book’s author – and not of his – in the controversial paragraph.

“Whether or not a reviewer agrees with an author’s position, he or she has a duty to convey the book’s thesis in good faith,” the editors wrote.

“Critics and complainants have simply defaulted to the worst possible interpretation,” they added.

“This kind of behavior has become shockingly common and does a lot of damage to public discourse in Canada.