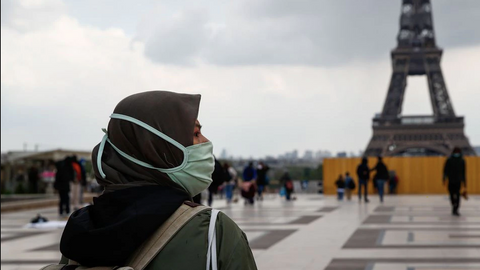 Sarah Asmeta, a 30-year-old Franco-Syrian lawyer who has challenged the rule set by the Lille Bar Association, says she plans to take her fight to the European Court of Human Rights.

France’s highest court has decided to uphold the ban on lawyers wearing the hijab and other religious symbols in courtrooms in the north of the country.

Wednesday’s decision was the first of its kind to set a precedent for the rest of the country.

The display of religious symbols is a moving topic in France and the court’s ruling could spark a national debate over so-called core Republican values ​​of secularism and identity ahead of the April presidential election.

The case was brought by Sarah Asmeta, a 30-year-old French-Syrian hijab-wearing lawyer, who challenged a rule established by the Council of the Bar of Lille which prohibits religious markers in its courtrooms on the grounds that it was discriminatory.

In its judgment, the Court of Cassation said the ban was “necessary and appropriate, on the one hand to preserve the independence of the lawyer and, on the other hand, to guarantee the right to a fair trial”.

Banning the wearing of religious symbols “does not constitute discrimination”, he added.

READ MORE: Women in France seek to end ‘humiliation’ against hijab in sport

Asmeta told Reuters she was shocked and disappointed by the decision.

“Why does covering my hair prevent my client from qualifying for a free trial? she told Reuters. “My clients are not children. If they choose me as a lawyer, with my veil, it is their choice.”

No law explicitly states that Asmeta cannot wear her hijab, a headscarf worn by some Muslim women, in the courtroom.

In the months following her swearing in and entry into law as a trainee lawyer, the Lille Bar adopted its own internal regulations prohibiting any sign of political, philosophical and religious belief from being worn with the robe in court.

Asmeta challenged the Lille bar rule, calling it targeted and discriminatory. She lost the case in an appeals court in 2020 and took the case to the Court of Cassation.

Religious symbols and clothing are prohibited for officials in France because of its principle of “laïcité”, or laïcité – the separation of religion from the state.

French lawmakers and politicians have sought in recent years to extend restrictions on wearing the hijab to cover, for example, mothers accompanying their children on school trips and football players.

In the run-up to a presidential election in April, right-wing candidates focused on identity issues.

Asmeta said she plans to take her fight to the European Court of Human Rights.

The case has caused heated debate within the legal community.

More than three dozen lawyers in Paris, where the bar has imposed a similar ban, penned an open letter on Monday calling for a nationwide rule against head coverings in courtrooms.

“We lawyers do not want a community and obscurantist justice,” they wrote in the French publication Marianne.

Slim Ben Achour, a discrimination lawyer, disagreed and said such bans were hypocritical.

“It’s not possible that we lawyers, advocates, or at least that’s how we market ourselves, are blocking Muslim women [from practising]“, he told Reuters.