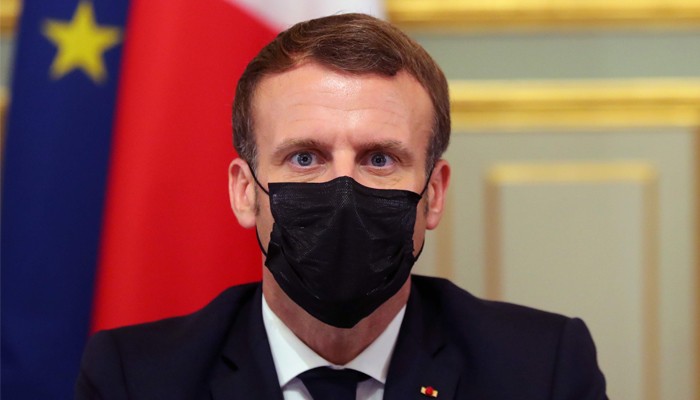 PARIS: French President Emmanuel Macron said on Saturday that he understands and respects the feelings aroused by the cartoons of the Holy Prophet Mohammed (PBUH) in an attempt to ease tensions with Muslims in France and around the world, but s’ is committed to never accepting violence.

The French president spoke to an Arab television station when he published the comments, suggesting he was seeking to ease growing tensions with Muslims around the world. However, he lambasted the “lies” that the French state was behind the cartoons.

France is on the alert after the reissue in early September of the cartoons of the Holy Prophet Mohammed (PSL) by the weekly Charlie Hebdo, which was followed by an attack in front of its former offices, the beheading of a teacher and of an attack on a church in Nice Thursday which left three dead.

The country was further rocked by a new incident on Saturday, when an assailant armed with a shotgun shot at an Orthodox priest as he closed his church in the French city of Lyon before fleeing, said a police source.

The 52-year-old priest, a Greek citizen, was shot in the liver at close range and taken to hospital in serious condition, the sources added.

A suspect was arrested later on Saturday, the Lyon public prosecutor announced, the motive for the attack remaining unclear.

Events in the Islamic world

The Islamic world had erupted into large protests in various countries – fueled by Muslim leaders – after Macron said France would never give up its free speech laws and that allowed blasphemous cartoons.

The French president’s remarks came after the gruesome murder earlier this month of Samuel Paty, a teacher who showed his class the controversial cartoons and was later beheaded by an 18-year-old Muslim of Chechen descent, Abdullakh Abouyedovich Anzorov.

Read also: A Saudi arrested for attempted stabbing attack on a guard at the French consulate in Jeddah

In his recent interview with Qatar-based TV station Al Jazeera, Macron struck in a softer tone and described his vision at length. “I can understand that people can be shocked by the cartoons but I will never accept that the violence can be justified,” he said.

“I understand the feelings that this arouses, I respect them. But I want you to understand the role that I have. My role is to calm things down, as I am doing here, but at the same time it is to protect these. rights.

“I will always defend in my country the freedom to speak, to write, to think, to draw”, he added.

The French president, despite everything, lambasted political leaders’ “distortions” over cartoons, saying that too often people were led to believe they were a creation of the French state.

Macron lambasted “a confusion that has been fueled by many media – and sometimes political and religious leaders – that is to say that these cartoons are in a way the project or the creation of the French government or the president”.

He also denounced calls for a boycott of French products – supported in particular by Turkish President Recep Tayyip Erdogan and taken up by certain retailers in Muslim countries – as “unworthy” and “unacceptable”.

The campaign, he explained, was created by some private groups “who relied on lies … sometimes other leaders” about the cartoons.

Even before the attack on Paty, Macron had promised a new tough campaign against radicalism in France, which has claimed the lives of hundreds of people since 2015.

Protests erupted in Afghanistan, Pakistan, Bangladesh, Mali, Mauritania and Lebanon on Friday, the latest in a series of mass rallies denouncing France.

“Too early to say”

France is still reeling from the latest Nice attack, which Macron described as an incident of religious extremism.

The French authorities sought Saturday to know if a young Tunisian suspected of having killed three people during a ransacking with the knife inside a church in Nice had benefited from outside help.

Brahim Issaoui, 21, only arrived in Europe from Tunisia last month and, according to prosecutors, killed a church worker, a Brazilian woman and a French woman in the attack on Notre-Dame Basilica. Lady Thursday morning.

The assailant slaughtered Nadine Devillers, 60, and sexton Vincent Loques, 55. A Brazilian mother, Simone Barreto Silva, who was stabbed several times, took refuge in a nearby restaurant but died there from her injuries.

Issaoui has been shot and killed by police on several occasions and is currently in serious condition in hospital. Investigators were unable to question him and his precise motivations remain unclear.

“It is still too early to say if there were other accomplices, what were his motivations in coming to France, and when this idea took root in him,” said a source close to the investigation who requested anonymity.

Investigators believe that Issaoui illegally traveled to Europe via the Italian Mediterranean island of Lampedusa on September 20. He arrived at the Italian port of Bari on October 9 before heading to Nice a day or two before the attack.

French police arrested another Tunisian on Saturday, bringing the number of people detained in connection with the deadly attack in Nice to four.