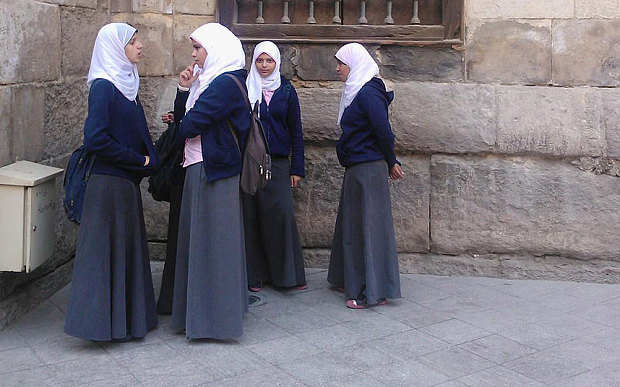 A 15-year-old Muslim girl in France has been kicked out of school for wearing a long black skirt after being seen as a violation of the country’s ban on wearing religious clothing in public schools.

The young girl, named Sarah K, was sent home twice in a month from the LÃ©o Lagrange high school in Charleville-MÃ©ziÃ¨res, in the east. According to a local education official, Patrice Dutot, the young girl “has been invited to come back with neutral clothes and it seems that her father did not want the student to return to school”.

Sarah K told the local newspaper L’Ardennais that her skirt was â€œnothing special, it’s very simple, there is nothing flashy. There is no religious sign at all.

However, the ban is seen by many as disproportionately targeting the Islamic veil, to the point where it is often referred to as a “French veil ban” in international media. It is understood that Sarah K was not wearing a headscarf when she was sent home, having removed it before entering school.

Sarah K’s story sparked widespread outrage both inside and outside the country. At one point, the hashtag #JePorteMaJupeCommeJeVeux (“I wear my skirt as I please”) was in vogue on Twitter in France. The hashtag has had over 45,000 tweets since Tuesday.

I’m confused. Is the freedom to be told what to wear or to choose what to wear? #IWearMySkirtLikeIWish

Where does secularism end and where does Islamophobia begin? #IWearMySkirtLikeIWish

According to the director of LÃ©o Lagrange, the decision to send Sarah K home came in the context of “other more visible incidents related to the wearing of the headscarf”. Around 130 schoolgirls were sent home last year in the country for wearing long skirts, according to the Collectif contre l’islamophobie en France.

In 2011, France banned the full face veil – also known as the niqab or burqa – in public places, and was the first European country to do so. The ban drew much criticism, especially from outside the country, from those who saw it as an affront to free speech.

However, the European Court of Human Rights upheld the ban in July 2014 after a complaint against it was raised by a 24-year-old French Muslim woman whose name has not been identified. The woman argued that the ban was “inhuman and degrading and contrary to the right to respect for family and private life, freedom of thought, conscience and religion”, also calling the ban “discriminatory”.

Daesh claims its first attack in the United States

Surveillance cameras will be deployed throughout the country in Egypt