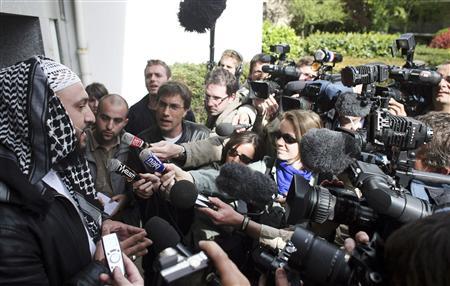 PARIS (Reuters) – A French Muslim threatened with having his passport withdrawn for practicing polygamy on Monday denied the accusation, saying he only had one wife and several mistresses.

The case of Lies Hebbadj, an Algerian-born butcher who became a French citizen when he married a French woman in 1999, escalated into a major political feud with opposition parties accusing the government of exploiting the situation.

Hebbadj’s story came to light on Friday, when his wife complained that she had been fined for driving while wearing an Islamic veil on the grounds that it was dangerous.

Interior Minister Brice Hortefeux accused Hebbadj of having four wives, who were claiming single parent benefits between them for his 12 children.

The accusation came days after the government announced a plan to ban full-face veils from the streets of France.

Hebbadj said that only one was his wife and the others were lovers.

“If one can be stripped of his French nationality to have mistresses, then many French people could lose theirs,” he told reporters in the city of Nantes, in the west, where he lives. .

A person can lose their French passport if they acquired it by fraud – if, for example, Hebbadj hid an existing marriage when he married the Frenchwoman. Mistresses, however, are not uncommon in France, where former President FranÃ§ois Mitterrand has kept a second family hidden for years.

Hebbadj’s lawyer, Franck Boezec, said he had not ruled out filing a defamation complaint against Hortefeux.

While it is still not clear whether Hebbadj and his partners broke the law, Immigration Minister Eric Besson has suggested stricter legislation to punish polygamists.

“If the French consider that fraudulent polygamy and claims for benefits should not be allowed, then (…) we could well imagine a change in the law,” Besson told RTL radio on Monday.

Local authorities on Monday launched an official investigation into allegations of polygamy and benefit fraud.

Still disgusted with a beating in the regional elections last month, French President Nicolas Sarkozy has revived a strident tone on law and popular order with many of his voters.

He called for a public ban on veils such as the burqa or niqab, which he describes as demeaning to women, in a legal gamble given constitutional guarantees on freedom of religion.

The French Council of Muslims (CFCM), an organization that opposes the full-face veil but does not believe a ban is useful, met with French Prime Minister FranÃ§ois Fillon on Monday to complain that the burqa debate undermined the image of Muslims.

“The Prime Minister assured us that the government will do everything to avoid any stigmatization and ensure that the law (on the veil) will not make any reference to the religious aspect of the issue,” said CFCM chief Mohammed. Moussaoui.

Seven in ten people are in favor of the law, according to a poll released Monday.

Over the weekend, unknown assailants shot at a mosque and a halal butcher’s shop in Istres and Marseille in southern France.

The CFCM lamented that the government did not comment at all on the two separate attacks, contrary to numerous statements about the Hebbadj family.

“This kind of unbalanced communication (…) risks creating frustration and tension within the Muslim community,” Moussaoui told reporters after meeting Fillon.