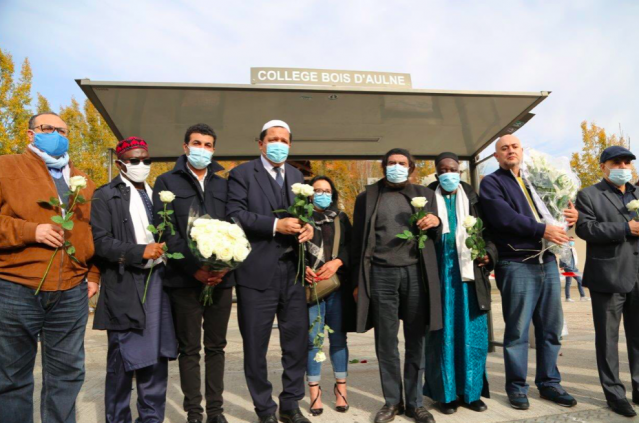 The imam of the Parisian suburb of Drancy, Hassen Chalghoumi, delivered a speech to the media present at the scene, declaring: â€œWe are all Samuel Paty; he is a martyr for freedom.

Mr. Paty was beheaded outside the school by an Islamic extremist, after showing controversial images of the Prophet Muhammed in a course he was teaching on free speech.

In a moving speech, Mr. Chalghoumi strongly condemned the actions of Mr. Paty’s assassin, calling him a “criminal” and “terrorist”.

Hassen Chalghoumi: “You have to be more than firm (…) yes, it’s a fatwa, a hate speech” pic.twitter.com/093aWcyB7P

It comes after thousands of people gathered in tribute to Mr. Paty this weekend in France.

Minute of silence in the European Parliament

In Brussels, the European Parliament paid tribute yesterday morning to My Paty, opening its session with a minute of silence in his honor.

President Davis Sassoli told the assembly: â€œIt is with great emotion that I invite you to observe a minute of silence in honor of Samuel Paty [and] all the victims of terrorism and all those who fight terrorism on a daily basis through their work, their commitment and by example.

Mr Sassoli went on to express his support for the teachers. He said, â€œTerror is fought by education, by teaching – something Samuel Paty believed and practiced.

â€œIt is a daily struggle, which millions of teachers lead with courage and determination. They need our support.

A minute of silence will be held in French schools

A minute of silence will also be observed in French schools when students return after the holidays, Education Minister Jean-Michel Blanquer told a news source. BFMTV this morning (October 20).

He said the tribute would take place in all schools “without exception” and would be followed by “education for students from all angles”.

Mr. Paty will receive a posthumous title Legion of Honor

Mr Blanquer confirmed Mr Paty would receive a posthumous title Legion of Honor, the highest French order of merit, and he will be made commander of the Academic Palme, the national order of educational services.

A national tribute ceremony to Mr. Paty will take place on Wednesday, October 21, from 7:00 p.m. at the Sorbonne. The university was chosen for the ceremony because it symbolizes the spirit of the Enlightenment, knowledge and education in France.

Mr. Paty’s family, current politicians and former presidents and prime ministers have been invited to attend.

Murder of a teacher in Paris: what we know about the attack

Murder of French teacher: 11 in detention as solidarity grows