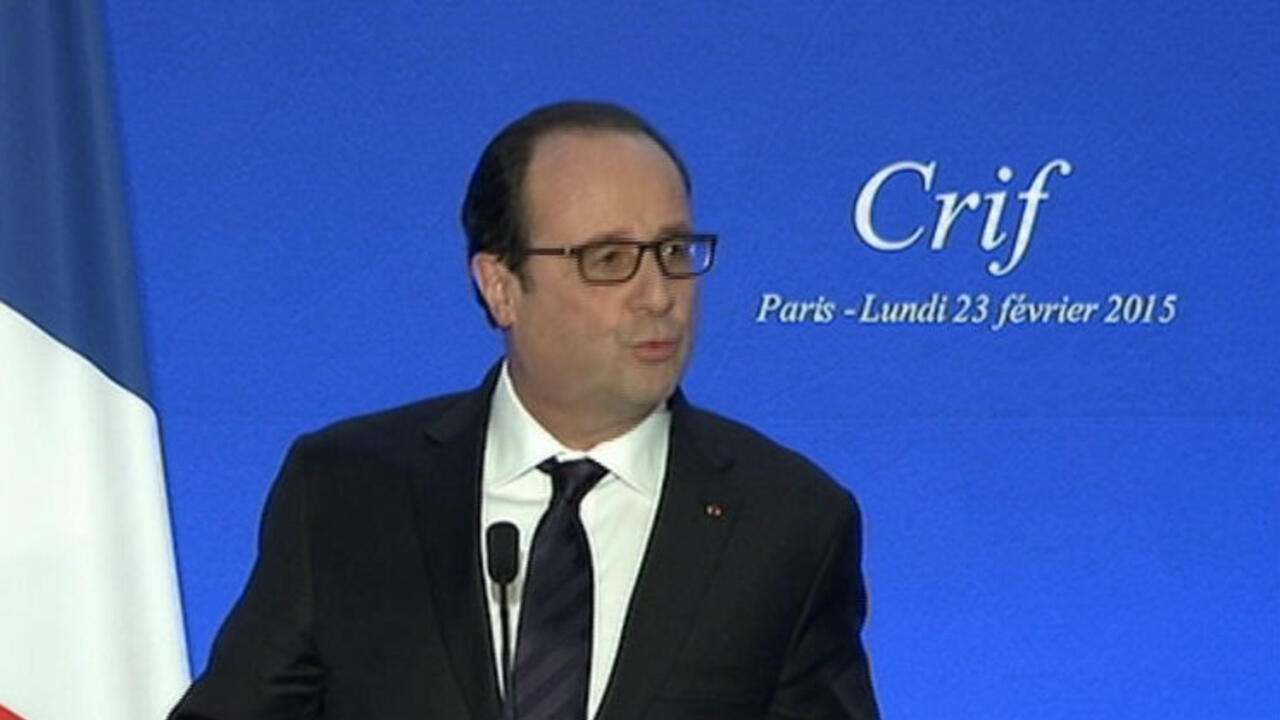 French President Francois Hollande on Monday presented a plan to fight anti-Semitism at a Jewish council event that was boycotted by Muslim leaders after the council chairman said young Muslims were behind “all” violent crimes in France.

Speaking at the annual dinner of the Jewish coordination group, the Representative Council of Jewish Institutions of France (CRIF) – a major event on the French political calendar – Hollande called for “faster and more effective sanctions” against racism, anti-Semitism and homophobia. The French president’s comments came as his government prepares to unveil a hate crime plan next month.

The annual CRIF dinner was supposed to provide a platform for Hollande to highlight his government’s plan to crack down on hate crimes. But the president’s speech was overshadowed by a major row, which erupted between France’s major Jewish and Muslim organizations.

Shortly before the start of the CRIF dinner, France’s largest Muslim organization, the French Muslim Council (CFCM), announced it was boycotting the event following comments from CRIF President Roger Cukierman, according to which young Muslims were the cause of all violent crimes in France.

‘ALL THE VIOLENCE TODAY BY YOUNG MUSLIMS’

In an interview with French radio station Europe 1 earlier Monday, Cukierman noted that “All violence, and we have to say it, all acts of violence today are committed by young Muslims. Of course, this he is a small minority of the Muslim community and Muslims are the first victims, â€he added.

The annual CRIF dinner has traditionally attracted top French politicians as well as leaders of all major religions. The leaders of the CFCM have been attending the event for several years.

The CFCM, said Cukierman, â€œinformed us this afternoon of their decision not to attend the dinner. I learned of this decision with deep regret, “he said. Cukierman added that he called CFCM chief Dalil Boubakeur” to try to change his mind “and told the chief of the CFCM that the charges against him were unfounded.

The boycott underlined the rise of religious tensions in France, which is home to the largest Muslim and Jewish communities in Europe. The 2015 CRIF annual dinner comes less than two months after a series of attacks by Islamist militants against the offices of the French satirical weekly Charlie Hebdo and a Parisian kosher supermarket that left 17 people dead and the three attackers.

Muslim groups have recorded an increase in Islamophobic acts, including vandalism against mosques following the Charlie Hebdo attacks.

This has been accompanied by an increase in anti-Semitic attacks in France, including the vandalism of hundreds of graves in Jewish cemeteries in eastern and northern France in recent weeks.

Cukierman’s remarks about young Muslims weren’t the only controversial comments ahead of Monday night’s event.

In his interview with Europe 1, Cukierman noted that while he would never vote for the far-right National Front party, “it is now a party that does not commit violence.”

Front National leader Marine Le Pen was not invited to the event, however, despite a comment from Cukierman earlier Monday that the current far-right party leader was “beyond reproach.”

Le Pen’s father, Jean-Marie Le Pen, has been frequently accused of anti-Semitism and is vilified throughout France for his infamous rejection of the Holocaust as a “detail” of history.

The new National Front, however, devoted considerable energy to trying to soften the party’s anti-Semitic image.