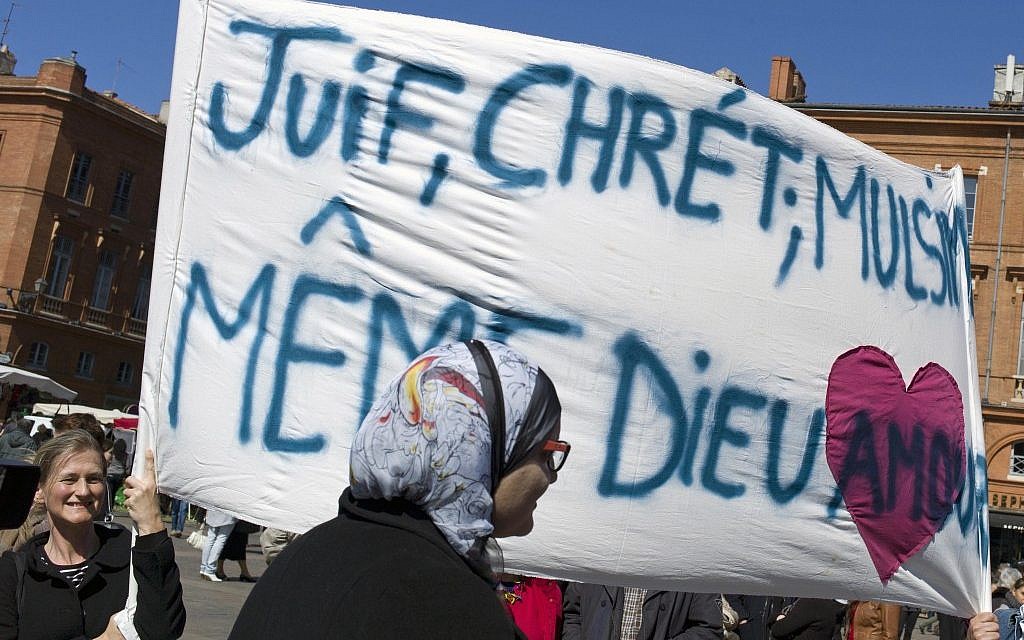 French Muslim leaders have all refused to sign a joint declaration with their Jewish counterparts condemning anti-Semitism and anti-Muslim hatred, according to the British activist behind the interfaith campaign, which has been successfully carried out in the UK .

Fiyaz Mughal, of the Muslims Against Anti-Semitism Initiative, last month sought to replicate in France a successful public interfaith campaign that was undertaken in the UK in May, which saw full-page newspaper ads signed by more a dozen British Muslim leaders. placed in major British dailies – including the Telegraph and the Metro – condemning anti-Semitism.

Mughaz said he found “a receptive base among some Muslims in the UK and care and empathy for Jewish brothers and sisters when we ran the campaign in the UK.”

British Jewish leaders, led by Chief Rabbi Ephraim Mirvis, were then invited to a festive interfaith iftar meal with their Muslim counterparts.

â€œThe sentiment within some sections of Muslim communities in the UK is markedly different and much more positive for Jewish communities here in the UK than in France,â€ added Mughaz, Founder and Director of Faith Matters, a Muslim anti-extremism group. .

When he sent the draft declaration to French leaders, however, the response was much less encouraging.

â€œThis was not the case in France, and what I found were deep divisions and deep politicization on the most fundamental issue of standing up for the other. I had to change the text and rephrase it, and with very few responses back and with suggestions that Muslims would not just want to be associated with the fight against anti-Semitism alone, â€he said in a statement to The Times of Israel.

â€œI mean, think about that for a moment. It was impossible to bring the signatories together to firmly oppose anti-Semitism, which is the oldest historical hatred, â€Mughaz said.

No French Muslim leader was ultimately willing to sign the pledge, which called for a “challenge” against hatred of both Jews and Muslims, defended European values â€‹â€‹and ended with a call for solidarity between two religious communities.

Several prominent French Muslim leaders and organizations contacted by The Times of Israel did not respond at the time of publication.

Mughaz, meanwhile, hoped they would change their mind.

â€œI hope that my fellow believers in France will be able to come forward, as many really want, to be in solidarity with the Jewish communities in this turbulent period in Europe. Now is the time, “he said.

His campaign came months after a French manifesto against anti-Semitism, signed by 300 dignitaries and stars, sparked anger in the local Muslim community over a call to remove verses from the Qur’an calling for “murder and to the punishment of Jews, Christians and disbelievers. “on the grounds that they are” obsolete “.

The signatories – including former President Nicolas Sarkozy and former Prime Minister Manuel Valls – condemned what they called a “quiet ethnic purge”, driven by the rise of Islamist radicalism, particularly in working-class neighborhoods, and accused the media of being silent about publishing it.

“In our recent history, 11 Jews were murdered – and some tortured – by radical Islamists because they were Jews,” the statement reads.

The killings mentioned date back to 2006 and include the fatal 2012 shooting of three schoolchildren and a teacher at a Jewish school by Islamist gunman Mohammed Merah in the southwestern city of Toulouse.

Three years later, an associate of the two brothers who massacred a group of cartoonists for the satirical newspaper Charlie Hebdo killed four Jewish men in a hostage-taking at the kosher supermarket Hyper Cacher in Paris.

Republican guards stand in front of the Hyper Cacher supermarket before a ceremony marking the second anniversary of the deadly attack on the store in Paris on January 5, 2017. (AFP / CHRISTOPHE ARCHAMBAULT)

In April 2017, an Orthodox Jewish woman in her sixties was thrown out of her Paris apartment window by a neighbor shouting “Allahu Akhbar” (God is the greatest).

The last attack to rock France came in March when two perpetrators stabbed 85-year-old Holocaust survivor Mireille Knoll 11 times before setting her body on fire in a crime involving under investigation for anti-Semitism.

Officially, the number of anti-Semitic crimes fell in France in 2017 for the third consecutive year, according to the Interior Ministry, down 7%.

But Jews are the target of around a third of hate crimes recorded in France when they represent only about 0.7% of the population.

The Jewish community, numbering more than half a million people, is the largest in Europe, but has been affected by a wave of emigration to Israel over the past two decades, in part because of the anti-Semitism in immigrant neighborhoods.

AFP contributed to this report.