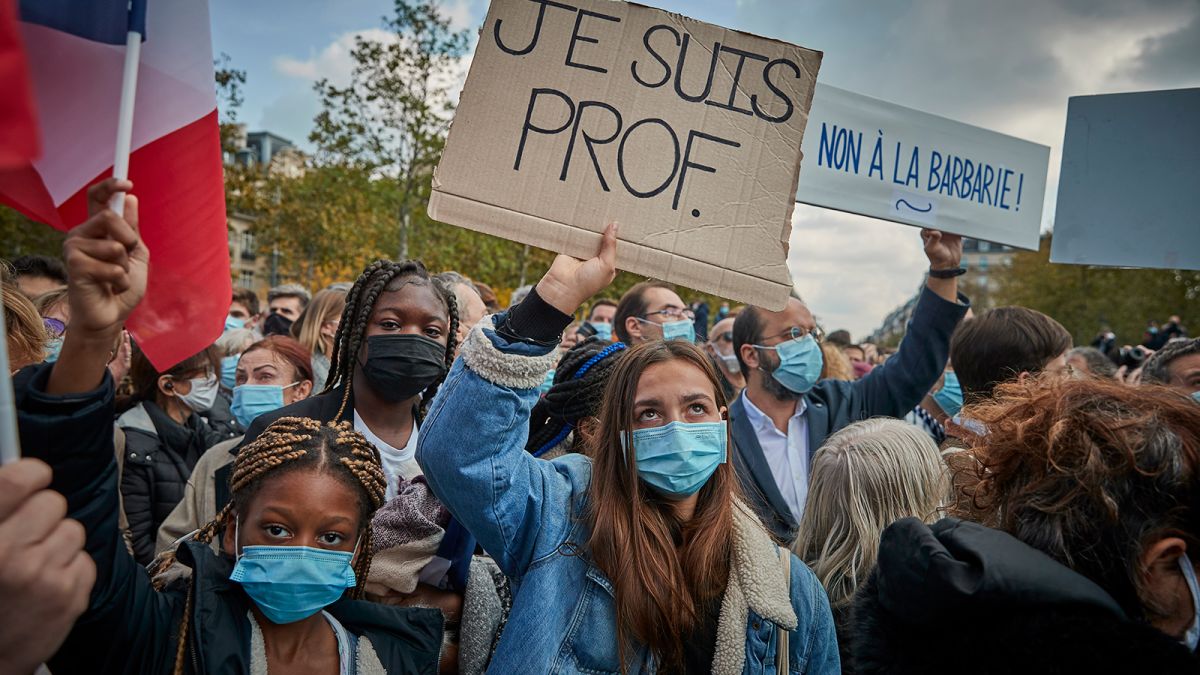 On October 16, Samuel Paty, a teacher in France, was brutally killed as he left school. Paty had just completed a nationally compulsory course on â€œfreedom of speechâ€ in connection with the Charlie Hebdo magazine case five years ago. Around this time, a terrorist attack on the magazine killed many of the people responsible for the Mohammed cartoons. A group of Muslims, accused of collaborating with the attackers of Charlie Hebdo, is currently on trial.

Protest against the murder of Samuel Paty used to attack Islam.

Shortly after Paty was killed, police shot dead his killer, who said he was acting to protect Islam.

Despite his statement, Muslims living in France rejected his act. Dalil Boubakeur, rector of the Great Mosque of Paris, called on imams across France to condemn terrorism during their Friday sermons.

The center-right government of President Emmanuel Macron, which brutally used the police against yellow vest protesters and strikers, tried to use the revulsion against Paty’s murder to make political gains. Interior Minister Gerald Darmanin, proclaiming that France was at war, began a series of brutal actions against Muslims and their organizations in France.

Indeed, he declares war on the six million Muslims in France and on the anti-imperialist organizations.

The government claims that it is facing a “terrorist murder plot” and that it is therefore justified to carry out hundreds of raids against individuals and organizations, to ban Muslim aid organizations and to expel people. hundreds of foreigners whom he considers “suspect”.

Darmanin described the Collective against Islamophobia in France (CCIF) as an â€œenemy of the republicâ€. The CCIF began its fight against anti-Muslim sectarianism in 2004. It has helped thousands of French Muslims to fight against discrimination and has been able to mobilize large demonstrations.

The regime has also banned the pro-Palestinian group Collectif Cheikh Yassine. Anti-Communists have tagged the headquarters of the French Communist Party with a sign calling the PCF “collaborators in terrorism”. Some prominent right-wing French politicians tweeted the images.

In France, a lower proportion of the population declares to practice a religion than in any other European country. French laws and traditions encourage â€œsecularismâ€, which means a secular and non-religious approach to politics and most French institutions, such as schools.

But Muslims, from former colonies of French imperialism in North or West Africa, now make up nearly 10 percent of people living in France and the largest number who practice a religion.

While workers and farmers in France have won secularism as a progressive claim of revolutions and class struggles, in the current situation, the Macron government is wielding secularism against a part of the population that has been systematically oppressed. Interior Minister Darmanin even went on television denouncing grocery stores with halal food sections, saying he was shocked by stores selling “community” or Muslim-oriented food.