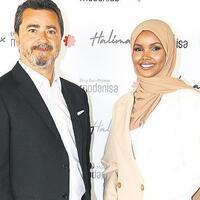 Halima Aden, a Muslim model who became a pioneer in modest fashion by wearing her hijab on catwalks and at photoshoots, visited Istanbul as she was appointed global brand ambassador for a Turkish company.

Speaking at a press conference, the Somali-American model expressed her great pleasure in being in Turkey after a three-year hiatus, while praising the traditional Turkish bath and the “magical” atmosphere of Istanbul. .

â€œI love Turkish baths. Turks are very lucky to have such a culture, â€she said, noting that she goes to a Turkish bath every time she comes to Turkey.

During her visit, the model signed an exclusive two-year deal with Modanisa, known as one of the world’s largest modest fashion retailers.

She will lend her face, name and creativity to the company’s marketing efforts around the world and she will also design two new collections for the company as per the agreement.

One of the most famous Muslim women in the world, Aden’s new role for Modanisa marks her return to fashion 10 months after leaving the industry to avoid having to compromise her religious beliefs.

Her new partnership with the Turkish company will likely save her many of the challenges she faced when working with other brands.

Since rising to fame in a burkini during an American beauty pageant in 2016, Aden has posed regularly for the Turkish brand, strutting the catwalks at Modanisa’s Modest Fashion Weeks in London, Istanbul and Dubai, passing by. through several promotional campaigns.

In 2019, she became a designer in collaboration with the Turkish company, producing a collection of 47 scarves which sold out in a matter of weeks.

This week in the ninth: Powerpoints and payday loans – Litigation, mediation and arbitration