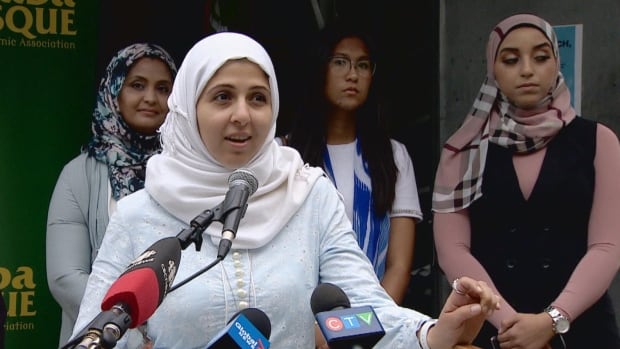 Various leaders of Edmonton’s Muslim community spoke to reporters outside Sahaba Mosque in Boyle Street about the urgent need for action. The city has become a hotbed of Islamophobic incidents in Canada, with several attacks on Muslim women wearing hijab in recent months.

“The time for thoughts and prayers is over,” said NCCM spokesperson Adil Hasan. “We need to see concrete actions and we need to see them now.”

The recommendations are directed at all three levels of government and include amendments to the Criminal Code for hate crimes, anti-Islamophobia strategies in provincial education, and municipal anti-racism campaigns.

They precede a national summit on Islamophobia on Thursday, which was requested by lawmakers in June as a result of the attack on the Afzaal family in London, Ontario.

A recommendation at the municipal level is to invest in celebrating the local history of the Muslim community.

Women played a crucial role in establishing Al Rashid, Canada’s first mosque, in the 1930s and then saving it from demolition in the 1990s, said Noor Al-Henedy, communications director of the mosque.

â€œAnd today we are here and come under attack for just having the audacity to wear our hijab,â€ she said.

â€œWhat happened to our city?

Al-Henedy said action must be taken today to tackle Islamophobia and change the discourse.

â€œBecause 20 years from now, I don’t want my daughter to look back and talk about Muslim women and this is our story. It cannot be our story. “

She said the victims had become confined to their homes, unable to go about their daily business out of fear. Mohamud spoke about the need for a national fund for victims of Islamophobia, one of the federal recommendations of the NCCM.

She said Islamophobia is endemic in Canada.

The CNMC developed the recommendations after receiving feedback from mosques and community organizations across the country, including the Edmonton Council of Muslim Communities.

Its chairman, Masood Peracha, said greater coordination between the three levels of government – including when it comes to law – would be beneficial.

“So that whatever is promoted, say, at the federal level, can also be passed on to the provinces and municipal governments as appropriate.” “

Revision of the by-law on public places

Another municipal recommendation to tackle violent Islamophobia is to pass street harassment bylaws with a ticketing authority. The CNMC cited a recent action by Edmonton City Council as an example of the approach.

A motion passed unanimously in April calls on the administration to work with the city’s anti-racism advisory committee to review and recommend changes to the anti-bullying provisions of the public places bylaw. It will examine the possibility of including in its offenses section any harassment based on race, religion, sexual orientation or gender identity.

The results of the review should be on the agenda for the August 11 meeting of the council’s community and public services committee.