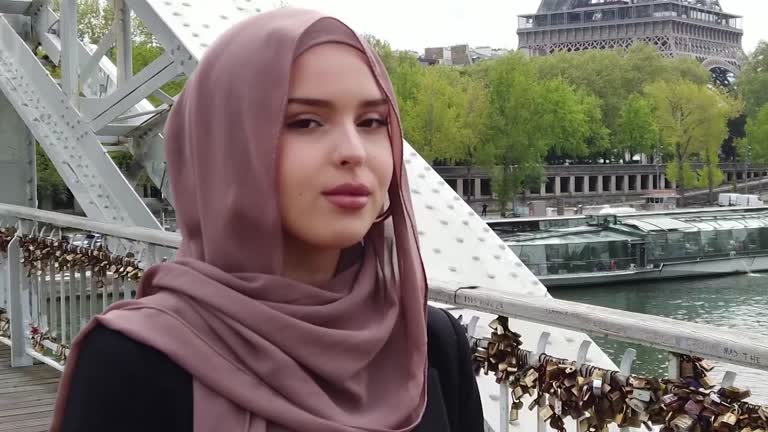 Don’t touch my hijab! French Muslim women speak out against the proposed ban

16-year-old Mariem Chourak is a devout Muslim who considers wearing the hijab an expression of her devotion to the Prophet Muhammad, but a proposal from French senators could soon deny her the freedom to do so in public spaces.

The amendment to an “anti-separatism” bill intended to strengthen France’s secular values â€‹â€‹and which applies to girls under 18 sparked outrage and sparked an online protest under the hashtag #HandsOffMyHijab (#PasToucheAMonHijab) which has gone viral beyond French borders.

â€œIt’s part of my identity. Forcing me to withdraw it would be humiliation, â€Chourak said. â€œI don’t understand why they would want to pass a discriminatory law. “

The place of religion and religious symbols worn in public has long been a subject of controversy in France, a decidedly secular country and home to the largest Muslim minority in Europe.

France banned the wearing of the Islamic headscarf in public schools in 2004. In 2010, it banned the niqab, the full Islamic veil, in public places such as streets, parks, public transport and administrative buildings.

â€œParents should not impose dogma on their children,â€ he told the upper house.

A group of young women are launching the #NotTouchAMonHijab campaign from the living rooms of their families’ apartments. They were originally just a few, but over 200 women joined a WhatsApp group to prepare for the launch within days.

“The reason why we decided to translate ‘Hands off my hijab’ into its French equivalent ‘Pas Touche a mon hijab’ was because it is important that it speaks to the French, to French institutions and to the French media”, explains Hiba. Latreche, 22, one of the first women involved. â€œEven if it resonates internationally, it was important that it do so with the French hashtag.

They had the support of social media influencers, an American lawmaker, and Ibtihaj Muhammad, the first American woman to wear a hijab when competing at the Olympics, among others. The hashtag has been shared tens of thousands of times on various social media platforms.

In France, the hashtag was shared by leading influencers in the Muslim community, such as Myriam Sefraoui, 21, who has 78,200 followers on Instagram and is known as â€œMyrabelleeeeâ€ on the social network. Her post featuring her with the English hashtag written on her palm was liked 32,400 times.

“(The politicians) want our emancipation, they want to save us from this imaginary oppression, but they are the ones who oppress us,” said medical student Mona el Mashouly, 25, in her hometown of Strasbourg.

President Emmanuel Macron warns that Islamism undermines the unity of the Republic.

His government’s anti-separatism bill cracked down on forced marriages and virginity testing, and included tighter oversight of religious associations. He initially made no mention of preventing minors from wearing the hijab in public.

The conservative-dominated Senate added the amendment, along with two more that would prevent mothers from wearing a hijab when accompanying children on school trips and ban full burkini swimsuits.

A joint committee from both chambers of parliament will debate the amendments and they could still be dropped from the bill.

But for Hiba Latreche the damage is done.

“(It is) symptomatic of the constant policing of the body, of the choices and beliefs of women that we have in France,” she said, “as well as of the instrumentalization of Muslim women.

Hijab in the white house

9 payday loan alternatives to save you exorbitant fees – Forbes Advisor