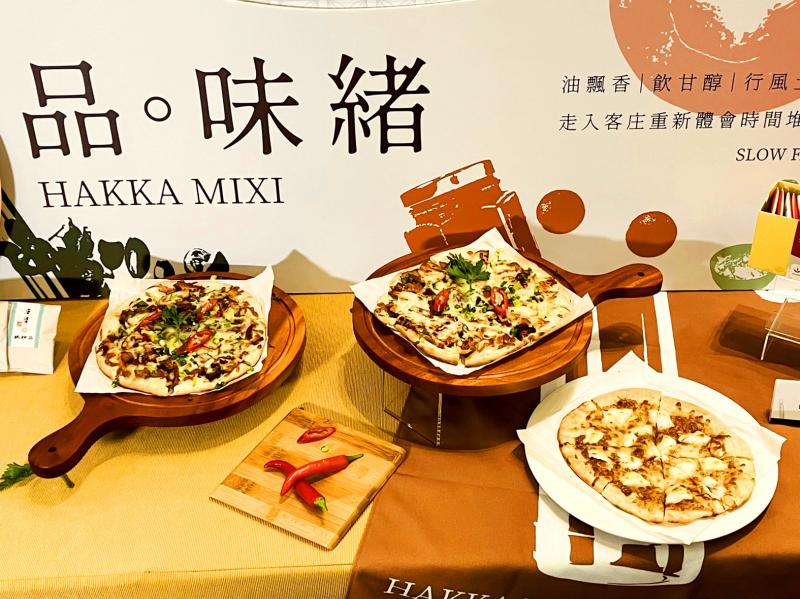 The Hakka Business Council introduced a new type of pizza with Hakka-style stir-fried toppings and other fusion dishes on Tuesday ahead of the Taiwan Culinary Expo which starts today.

The innovative dishes combine the traditions of Hakka home cooking with modern dishes that appeal to younger generations, he said.

Stands displaying the Hakka Mixi banner would serve a different menu each day during the exhibition, the council said.

Hsu was making a capon dish on tea seed oil and citrus sauce with pickled radish and French-style peanut tofu, Wang and Lin were toasting with fermented tofu spread and gnocchi, while Kuo and Ku were preparing a Chuti (竹地) dish of Chicken with Citrus Sauce and Pingtung Pork with Coke Sauce, he said.

They would create a variety of foods with ingredients such as dried persimmons, citrus sauce and scallion sauce, he said.

The exhibition will run through Sunday in Hall 1 of the Taipei World Trade Center.

Comments will be moderated. Keep comments relevant to the article. Remarks containing abusive and obscene language, personal attacks of any kind or promotion will be removed and the user banned. The final decision will be at the discretion of the Taipei Times.