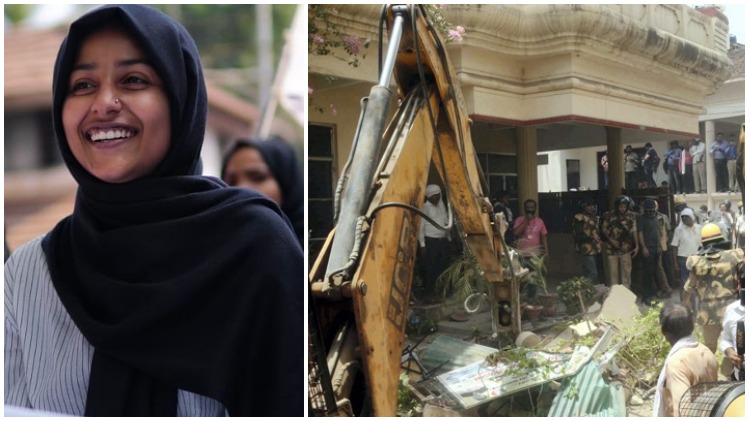 washington d.c.: Afreen Fatima, an activist whose home was illegally demolished by the Uttar Pradesh government over the weekend, has slammed authorities, saying they razed her house to ‘punish, humiliate and harass’ her family because she was an active Muslim.

“It is an alarming trend that… law enforcement, government and development authorities are arbitrarily, unjustly, illegally and lawlessly demolishing Muslim homes. They also punish and incarcerate Muslims for no crime,” Afreen Fatima, the activist, told an online congressional briefing hosted by 18 U.S.-based civil rights organizations.

“This [demolition] was just a way to punish my father for being an active local member of the Muslim community,” she added.

Police in the town of Prayagraj, where Fatima lives, first detained her parents and a sister on June 12. Afterwards, the district authorities razed their house even as the television cameras were rolling.

The BJP has since expelled Sharma but the police have failed to arrest him under Indian law. At the same time, Muslims across India who continue to call for Sharma’s arrest have faced police brutality, unlawful arrests and had their homes razed by the authorities.

In Fatima’s case, her father, diabetic mother and younger sister were all arrested after police scapegoated her father as the mastermind behind Pragyaraj’s protests.

“There was no mandate when [my father] was kidnapped,” said Fatima, a student leader and outspoken BJP critic. She was at the forefront of nationwide demonstrations in 2019 protesting the Citizenship (Amendment) Act protests which introduced, for the first time, a religious test in citizenship laws .

“The detention of my mother and my sister was illegal because in order to detain women for any inquiry or investigation, the police first had to obtain a certain authorization from the magistrate, which was never done.

Fatima pointed out that the family paid all their taxes and utility bills and never received a notice that their house was built illegally.

“There is a collective punishment to the whole Muslim community that says you can’t talk… I urge everyone not to just talk about it, but to hold the authorities, the forces of order and governments responsible for the arbitrary and anarchic power they wield over Muslim bodies, Muslim homes and Muslim lives.

On the occasion, Amnesty International scholar Govind Acharya said that the Modi government “is selectively and viciously cracking down on Muslims who dare to speak out and peacefully express their dissent against the discrimination they face… which is in total violation of the law”. India’s commitments under international human rights law.

“At Amnesty, we call on the Indian authorities to immediately end the excessive use of force in response to large-scale protests in the country…We also call for the immediate release of those who have been arbitrarily arrested solely for have peacefully exercised their rights. to freedom of expression and peaceful assembly, which are guaranteed by the Indian constitution,” Acharya said.

“It doesn’t just affect activists. You don’t have to be a vocal Muslim to have a target placed on your back,” said Amin Zama, associate director of the Indian American Muslim Council (IAMC), a civil and human rights organization in India. “The BJP has proven this by demolishing the homes of poor Muslims in Delhi, Gujarat and Madhya Pradesh with only the flimsiest evidence linking them to riots or illegal construction. This is clearly another step towards the genocide of 220 million Muslims, and India is getting closer to it day by day.

According to Ria Chakrabarty, policy director at Hindus for Human Rights, a non-profit organization, India seemed to be, “Taking notes from the Israeli hard right and pursuing a similar strategy to create an ethnonationalist apartheid state, where religious and cultural minorities live in a separate environment and unequal existence.

“The US government should use its human rights toolkit, particularly through the International Religious Freedom Act, to punish individuals who have clearly persecuted India’s religious and cultural minorities,” he said. said Chakrabarty.