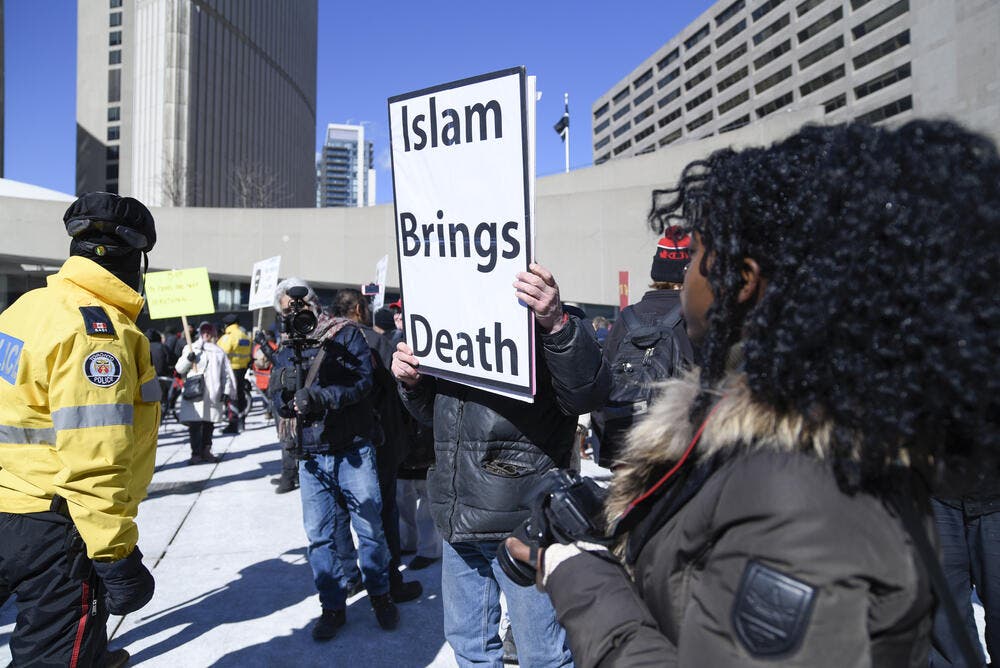 Canada: a list of attacks against the Muslim community

A Pakistani-Canadian family was recently the victim of another hate crime against Muslims in Canada. Here is a list of some historic attacks on the country’s largely peaceful Muslim community.

Five members of a Muslim family have become the latest target of anti-Islam attacks in Canada. The hate crime claimed the lives of four family members and seriously injured a child.

20-year-old Canadian forward Nathaniel Veltman crushed the family with his van in London, Ont. On Monday.

My heart is heavy when I hear of this tragic loss of life.

First Nations support Canada’s Muslim community as they mourn this terrible and heinous loss of life. Lives taken far too soon because of hatred. @nccm https://t.co/Yp2mHGSsg7

Canadian authorities defined the incident as a “horrific act of Islamophobia.”

if you would like to help financially, here is the donation link launched by the muslim community in london, canada.https://t.co/LJfEwMsZLc

As Canada bills itself as one of the most liberal states under Prime Minister Justin Trudeau, anti-Islam hate crimes continue to threaten both community peace and the lives of Muslims in the North American country.

Canadian judicial authorities, like most Western countries, do not define anti-Islam attacks as terrorist acts, although they do characterize incidents of radical armed groups like Daesh and Al Qaeda as terrorist acts.

Here is a short list of some past anti-Islam attacks in Canada:

Attack on a mosque in Quebec

The perpetrator was sentenced to life imprisonment. While Canadian leaders like Trudeau have called the assault a terrorist act, Bissonnette has not been charged under the terrorism clause of the country’s Criminal Code.

The Quebec bombing sparked a vast public debate in Canada about why Islamophobic attacks motivated by right-wing political views are on the increase across the country.

In 2017, hate crimes increased significantly in Canada compared to the previous year. But with a 207% increase in hate crimes against Muslims, anti-Islam attacks were much higher than attacks against other social groups.

Even after the Quebec mosque shooting, which was widely condemned by the country’s leaders, attacks on Muslims “peaked”, according to a report on Islamophobia.

Attacks on other mosques

Islamic worship centers in Canada have been the target of anti-Islamic attacks over the past decade. Mosques have been under constant threat from hate groups since 2013.

In 2015, the only mosque in Peterborough, Ontario was set on fire by a hate group. A year before this vandalism, another anti-Islam assault, which was prevented by the police, targeted a mosque in Montreal. In 2014, Montreal police found a suspicious package outside another mosque. The package has been neutralized by the police.

Attacks on women wearing the hijabi

In Canada, many Muslim women have long been the target of hate groups. Some of these attacks apparently increased after Quebec, the country’s second-largest French-speaking province in terms of population, considered a bill proposing a ban on the wearing of religious symbols, including the hijab, in public spaces in 2013. The bill was not adopted.

Despite the continued attacks, in 2019, the premier of Quebec FranÃ§ois Legault affirmed that there was “no Islamophobia in Quebec”. After a political reaction, he retracted his comment.

The Canadian media fueled anti-Muslim sentiment, exacerbating problems related to Islamophobia in the country, according to experts.

“Islamophobia is a direct consequence of the anti-Muslim rhetoric conveyed in the media,” said a 2019 statement from the Canadian Muslim Alliance, referring to the country’s press organs.

This article has been adapted from its original source.

7 Ways To Get Quick Money Besides Risky Payday Loans