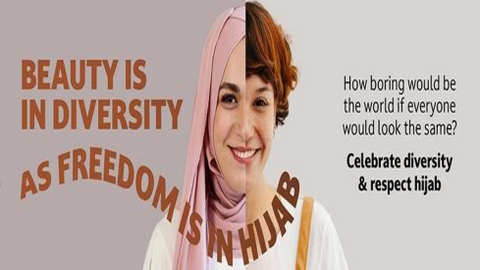 The campaign aims to stand up for diversity and tackle hate speech and discrimination against Muslim women wearing headscarves – but it hasn’t even been able to publish an image of a hijab.

The Council of Europe has produced posters of a woman wearing a hijab as part of an online campaign launched on October 28 to promote diversity among women and respect for Muslims wearing headscarves.

This decision came after a general outcry from French public and political figures who find the campaign and its posters which implicate women wearing the hijab as â€œdeeply shockingâ€.

The online campaign, co-funded by the European Union, was the result of two online workshops tenuous in September by the partnership between the Anti-Discrimination Service of the Council of Europe and the Forum of European Organizations of Young Muslims and Students (FEMYSO).

“This specific collaboration was in the form of online workshops with the aim of developing human rights-based narratives with various participants to counter anti-Muslim hate speech,” said Hande Taner, president. elected from FEMYSO to TRT World while indicating their long-standing relationship with the board given their work in favor of minorities in Europe.

The Council of Europe has posted posters on social media to raise awareness of ending discrimination against Muslim women.

#Equal treatment for all Each person should be free to choose what to wear and always have the same opportunities to access education. Wearing the hijab is a choice and a human right # WECAN4HRS So, # Let me choose @CoE_Antidiscrim @femyso @ENAREurope @EUParl_FR pic.twitter.com/MFFxGbuIWM

The images tweeted involve various images of women in hijabs with slogans that read “Beauty is in diversity, like freedom is in the hijab”, and “My scarf, my choice”.

However, the awareness campaign backfired and was condemned in France.

“This has met with backlash due to the pressure created by the poisoned narrative around Muslims online by prominent French politicians, diplomats and lecturers,” Taner said.

Islam is the enemy of freedom. This campaign is the enemy of the truth. It promises the veiling of Europeans. It is publicity jihad financed by your taxes. https://t.co/s2aMGK6uga

“This European campaign to promote the Islamist veil is scandalous and indecent at a time when millions of women courageously fight against this enslavement”, she declared.

“It is when women take off their veils that they become free, and not the other way around,” she added.

This European communication in favor of the Islamist veil is scandalous and indecent as millions of women courageously fight against this enslavement, including in France.

It is when retired women wear the veil that they become free, not the other way around! https://t.co/Zvn1Z6GENC

“Remembering that women are free to wear the hijab is one thing”, noted French Socialist Senator Laurence Rossignol.

â€œBut to say that freedom is in the hijab is another. It is to promote it. Is this the role of the Council of Europe?

For her part, the French Minister of Youth, Sarah El Hairy, revealed that one of the posters had deeply shocked her because she believed that the campaign encouraged the wearing of the headscarf.

“This is the opposite of the values â€‹â€‹that France defends … France has clearly expressed its very strong disapproval of the campaign, which is why it was withdrawn today,” she added in an interview on French television last week.

ðŸ”´ðŸ—£ï¸ Controversial video of the European Council: “France has expressed its extremely strong disapproval, hence the withdrawal of this campaign as of today”, announces @sarahelhairy, Secretary of State for Youth and Engagement, in # RuthElkrief2022 | @ruthelkrief. pic.twitter.com/Q6AfLVrsrF

On October 6, following France’s request and the backlash, the Council of Europe announced that it was removing campaign publications while seeking “a better presentation of this project”.

The council also said that the aim of the campaign, which is part of a project within the European Union (EU), is to raise awareness about respecting diversity and combating all forms of discourse by hatred.

“The campaign is in line with the values â€‹â€‹and priorities of the Council of Europe and the institutions of the European Union, which also defend human rights and against hate speech,” said Taner, stressing that ‘as a member state of the two organizations, France should better adhere to the collective European values â€‹â€‹of human rights.

Rayan Freschi, researcher at CAGE, explains that France has been an ideological laboratory of the West for centuries.

“Its political and philosophical framework is clearly not tolerant and inclusive: deep systemic racism has always been part of the DNA of the French Republic,” Freschi told TRT World while adding that Islamophobia in France is now state sponsored.

According to Freschi, France’s ideological structure – based on the Republic and secularism (secularism) is inherently fanatical towards normative religious beliefs and practices.

Hijab in this regard is the most controversial – and even rejected.

Therefore, this mindset paved the way for government pressure on the council to cancel its campaign.

France has again proven that it has been the laboratory of Islamophobia which tries to normalize this open hostility to the visibility of Muslims in the public space. And this decision by France further confirms that the country’s hostility towards Muslims is not a hoax, ” Louati said while adding that it is a reality for millions of Muslim women.

Previously, the French satirical magazine Charlie Hebdo’s cartoons has been the subject of worldwide controversy by posting anti-Muslim cartoons involving depictions of the Prophet Muhammad, a move considered an insult to Islam.

In response to widespread condemnation, France speech around the concepts of democracy and freedom of expression. However, regarding this recent campaign that cherishes freedom for Muslim headscarves, a different rhetoric has been adopted.

Yasser argues that the French conception of freedom contains double standards and is hypocritical when it goes against mainstream discourse.

You have freedom of speech when you dehumanize Muslims, when you make fun of blacks or immigrants. But we cannot make fun of Emmanuel Macron who pursues anyone who criticizes him or makes fun of him, ” he said.

“This anti-separatism law allows the government to shut down any organization on the basis of political disagreement,” he said, stressing that France further strengthens its position as leader of the normalization of Islamophobia in relation to the other western countries.

Considering European values â€‹â€‹in the context of freedom, democracy and the rule of law, Yasser indicates that these values â€‹â€‹tend to be circumstantial in France.

Restricting efforts to build human rights-based narratives to combat discrimination raises the question of the universality of concepts of Liberty egality and fraternity which lay the historical foundations of France.

July 14, 1789 – The storming of the Bastille during the French Revolution, a key moment as the masses step onto the stage of history and push the Revolution forward. “Liberty, Equality, Fraternity” pic.twitter.com/SVXZn04R18

“French universalism is the ideological justification for its past colonial imperialism,” Freschi said while adding that the current French approach to Islam and Muslims is very much in line with its past. colonial.

In fact, he claims that for France, those who do not live by this worldview, like French Muslims, are deemed regressive and are simply not free – and this illustrates the paradoxical structure of French values â€‹â€‹in the face of liberalism.

According to Yasser, France believes it can teach other countries abroad what they should and should not do in terms of human rights and civil liberties.

“But the current repression only shows that France is not a democracy as it claims it is,” he said, stressing that France should hold a mirror.

In this context, Taner argues that Muslims in France are exposed to one-sided freedom and the removal of campaign imagery is clear evidence of this.

In trying to silence this campaign of positivity and change, France is not just normalizing and legislating for anti-Muslim hatred in France, it is now exporting this culture of limiting freedom of expression to the rest of Europe. ”

According to her, despite French claims that her freedom applies to everyone, Muslims are not seen as equal or deserving of freedom.

“Any country that actively limits freedom of expression and restricts the rights of religious minorities is in fact not in line with European values â€‹â€‹and violates fundamental rights.”

Dave & Busters Trip with the Programs Board