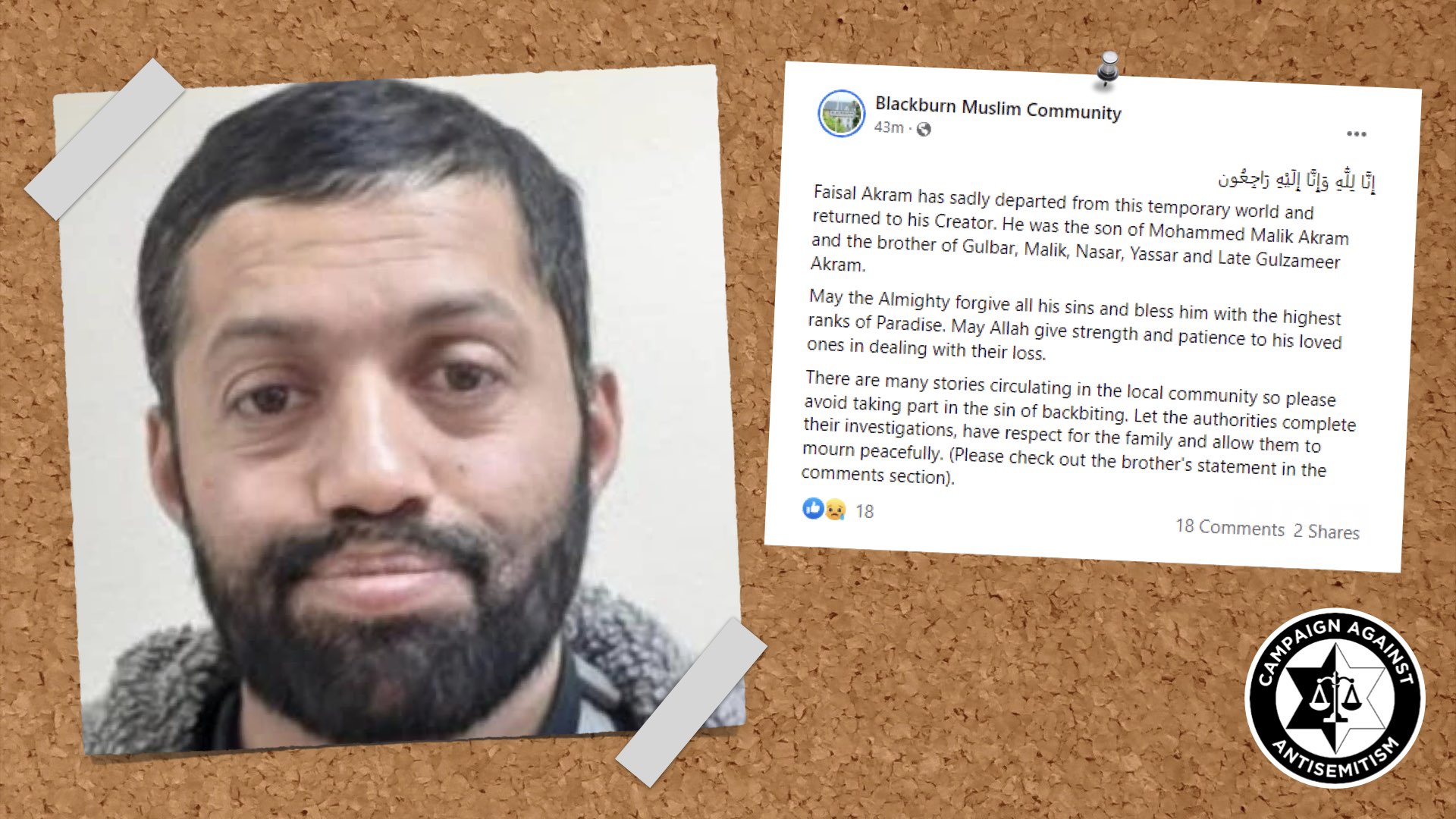 Following the confirmation that the deceased British man who attacked Congregation Beth Israel in Texas was 44-year-old Malik Faisal Akram, the Blackburn Muslim Community Facebook page is said to have prayed that the “Almighty” bless him with the highest ranks of heaven” in a now-deleted post.

Mr. Akram entered the synagogue during Sabbath services, uttering threats against the congregation and holding them hostage, demanding the release of Aafia Siddiqui, who is currently serving an 86-year prison sentence in Texas.

A declaration allegedly from Mr. Akram’s brother posted by the same Facebook page claimed that Mr. Akram had in fact freed all the hostages before the authorities carried out their raid and killed him. The statement adds: “We would also like to add that any attack on any human being, whether Jewish, Christian or Muslim, etc., is wrong and must always be condemned. It is absolutely inexcusable for a Muslim to attack a Jew or for any Jew to attack a Muslim, Christian, Hindu, etc.

Dr. Siddiqui is found guilty of two counts of attempted murder, assault with a weapon, use and possession of a firearm, and three counts of assaulting American officers and employees. During her sentencing, raising her middle finger in court, she shouted, “This is a verdict from Israel, not the United States. This is where the anger belongs. Dr Siddiqui had refused to work with a legal team made available to her by the Pakistani embassy on the grounds that they were Jewish, and she had also demanded that the jurors undergo some sort of genetic test to determine whether they were Jewish. were Jews.

In a letter to former US President Obama, Dr. Siddiqui wrote: “Study the history of the Jews. They always stabbed in the back anyone who took pity on them and made the “fatal” mistake of giving them shelter…and it was this cruel and ungrateful stabbing of the Jews that made them expel ruthlessly from where they win. strength. This is why “holocausts” happen to them all the time! If only they learned to be grateful and change their behavior!

Campaign Against Antisemitism is investigating the identity of the operator of the “Blackburn Muslim Community” Facebook page and alerting the authorities.

A Campaign Against Antisemitism spokesperson said, “We join Jewish communities around the world in highlighting that Malik Faisal Akram’s attack on Congregation Beth Israel in Texas ended without physically harming synagogue worshipers. , and to thank the brave law enforcement officers who ensured their safety.

“The fact that the author is from the United Kingdom raises very serious questions for the British authorities, in particular whether Mr Akram was encouraged or supported by local elements who could pose a permanent threat to the Jewish community. or the general public. That a ‘Blackburn Muslim Community’ Facebook page claiming to represent the local Muslim community posted a now-deleted post calling on ‘the Almighty’ to ‘bless him with the highest ranks of heaven’ demands an urgent investigation. We are investigating who is operating the page and alerting local law enforcement.