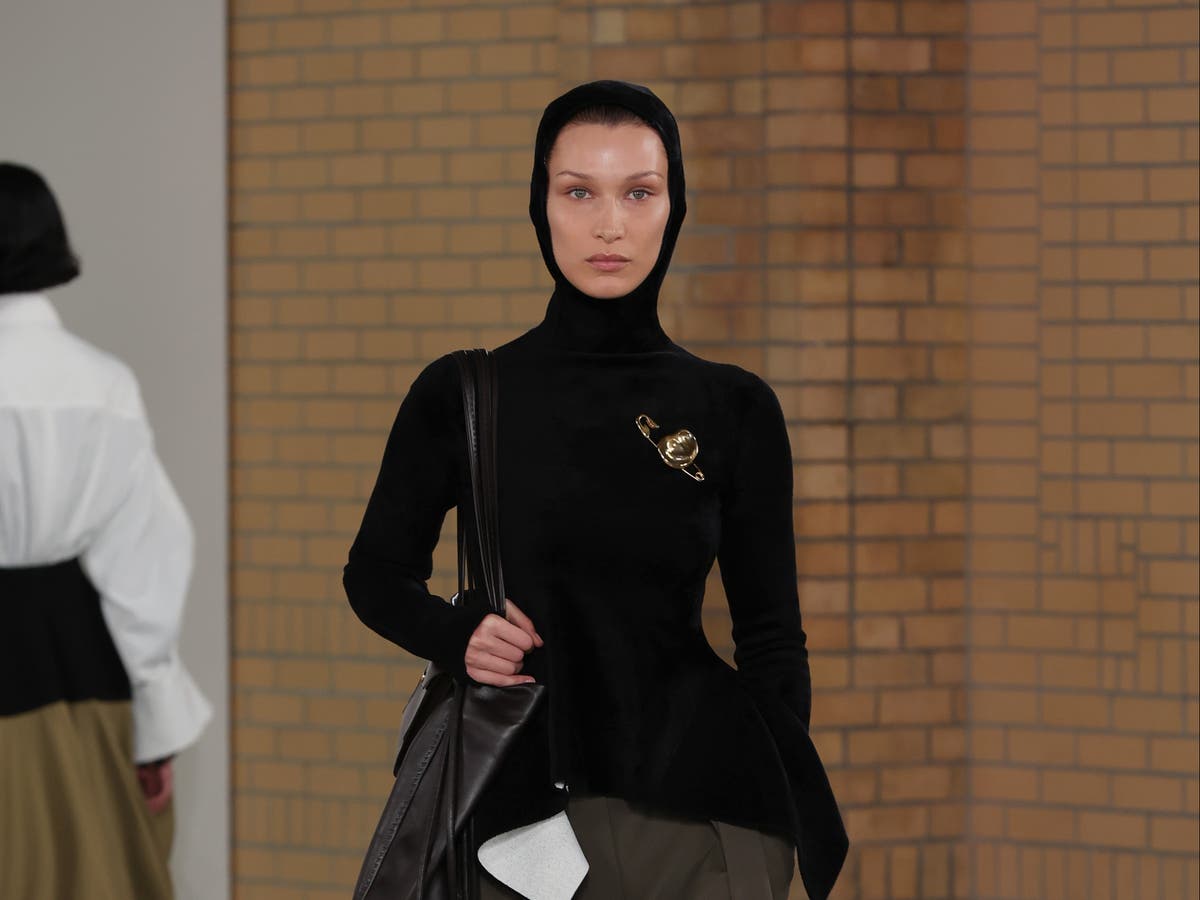 When I first saw images of Bella Hadid wearing a hoodie design at Proenza Schouler’s runway show at New York Fashion Week, I couldn’t help but cringe. Again, a head covering was glamorized by the fashion industry while hijabi women in places like France and India were denied the right to cover their hair.

This month has been unfortunately hectic for hijabi women in Europe and South Asia. Just this week, France’s bill that proposes to ban the hijab in sport passed through the country’s National Assembly, even after causing widespread consternation among Muslims around the world. Les Hijabeuses, a collective of French hijabi athletes, planned a protest in the form of a soccer match outside the National Assembly earlier this month – but the protest ended up being banned by French police.

On the other side of the world, in India, images of Muslim students and teachers being forced to remove their headscarves before entering school grounds are going viral on social media, after institutes of education in South India (a country with over 200 million Muslims) have controversially banned the hijab. The humiliating images were shared on Instagram and Twitter, where many non-Muslims also expressed their contempt for the blatantly Islamophobic injunction.

Meanwhile in New York, when Bella Hadid walked the Proenza Schouler catwalk in a fitted hoodie, I couldn’t help but feel that nasty feeling again – the one I couldn’t get rid of when Kanye West wore a full-face mask in Paris in violation of the national niqab ban, or when VogueFrance praised Julia Fox’s headscarf but remained silent when the country’s senate voted to ban the hijab for women under 18, or when Kim Kardashian donned a head-to-toe black outfit at the Met Gala , bearing uncanny similarities to a burqa.

Bella’s hooded appearance at New York Fashion Week was by no means the first hijab-like accessory we’ve seen on Western catwalks, but it came at a time when sentiment surrounding the hijab are at an all-time high worldwide. Thankfully, last night the model used her platform to help shed light on the plight of hijabi women who face injustice across the world by posting a series of Instagram images of hijabi women. A legend said, “It’s not your job to tell women whether or not they can STUDY or PLAY SPORTS, ESPECIALLY when it comes to their faith and safety.”

Another reading, “While fashion is a way to push boundaries and make things more palatable, I want us to remember where the hijab resonated and why it is so important to Muslim women around the world…If we are seeing more and more appreciation for hijabs and cover ups in fashion, we also need to recognize the cycle of abuse that Muslim women of all different ethnicities in fashion routinely encounter in fashion houses, especially in Europe and in America. Stand up for your Muslim friends. If you see something, say something.”

A third post on her Instagram raised awareness of a hijabi girl named Huda, who was attacked and beaten at her school in New Zealand on February 9. “It makes me angry and my stomach hurts. we need to change this immediate judgmental mindset. teach our friends, children, parents, families that to wear a hijab, be a Muslim or be anything other than white in general, does not equate to being a threat or different from anyone else. Teach them to love before hate. Educate before judging. Protect before intimidating,” writes Bella.

Along with Hadid’s headwear at the Proenza Schouler show, knit balaclavas and hoodies were also spotted in all the street styles of guests attending the fashion week. And just this morning, while browsing the “new arrivals” offerings on ASOS, I was struck by the appearance of several separate hoods – like a dubbed “crocheted knit snood” – some of which covered the whole face, at except for the eyes.

“The same Western countries that ban or hate the veil use it as a symbol to exoticize Star Wars characters and runway models,” Sarah Mainuddin writes in her book, Demystifying the Niqab. Muslim women are denied their right to cover themselves all over the world; meanwhile, hijab-like clothing is perpetually portrayed in fashion as “cool” and “trendy.”

But is fashion really to blame for the double standards society places on headwear? It’s possible, in fact, that the industry has helped Muslim women through its recent celebration of the “modest fashion” movement and the inclusion of hijabi models on the runways and in campaigns. 2018 even saw the launch of the Contemporary Muslim Fashions exhibition at the de Young Museum in San Francisco, which explored, celebrated and even validated modest fashion in America.

Now, as Muslim women around the world find themselves at a crossroads when it comes to politics that impact their freedom to cover their hair, perhaps fashion – an industry that has helped defend other causes like sustainability, homosexuality and body positivity – can help drive other changes, dispelling misconceptions about Muslim women and endorsing their freedom to dress as they wish.

One might think that fashion is fickle, simply concerned with aesthetics, and nothing deeper. But Bella’s brave decision to tackle the parodies currently facing hijabi women shows she has a purpose far greater than that of a speechless hanger. She presents herself as an ally for Muslim women who do not have the same privileges as her, such as the freedom to casually cover their hair without fear of being assaulted or fined. She is also proof that you don’t have to be an “orthodox” Muslim or a “modest” dresser to sympathize with hijabi women – you just need to be an advocate for choice and action. women. In another Instagram caption, she quotes hijabi model Taqwa Bint Ali (who was the face of Jean Paul Gaultier and recently collaborated with Adidas): “You know, at the root of it all, it’s all much deeper than Islamophobia; this is pure sexism and misogyny. no matter the country or era, men always want to control what a woman does and wears.

From Bella and Taqwa, to Halima Aden and Rawdah Mohamed (who was recently named fashion editor of Vogue Scandinavia), fashionable muslim women talk about hijab. The question is: can the momentum around this movement spread to the upper echelons of the industry?

Fashion can clearly be political, and the industry often sees activism even in its Fashion Week presentations. Who could forget Maria Grazia Chiuri’s iconic “We should all be feminists” t-shirts for Dior (which quoted an essay by Nigerian writer Chimamanda Ngozi Adichie) that stole the show in Paris in 2016?

London Fashion Week kicks off today, at a time in history when the hypocrisies surrounding ‘veiling’ are more blatant than ever. Balaclavas and scarves are all the rage, and mask-wearing due to the pandemic has been in effect for nearly two years. Yet, due to Islamophobic politics and politics, Muslim women in France, India and elsewhere are “altered” and forced to veil themselves.

When France first introduced its hijab ban for minors last year, Muslim women around the world responded with the #handsoffmyhijab campaign on social media. Would it be too much to ask the London designer to print this statement, as feminist as Dior’s popular slogan, on a t-shirt – or better yet, a hoodie – and recruit hijabi women to model it on the podium this week? British brands, after all, have jumped on the modesty bandwagon to target the purchasing power of Muslims, and have been criticized for their tokenism and financial motivation. If you ask me, this could be a much more meaningful way to support and connect with this demographic, which is in dire need of international support and allies right now.