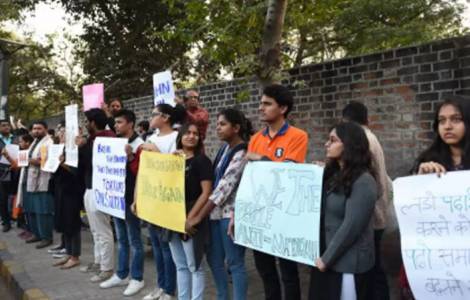 Ahmedabad (Agenzia Fides) – More than 100 Christians and members of various civil society groups in the state of Gujarat, in western India, urged the Prime Minister of the state to act against the “false propaganda” directed against the Muslim community. The letter was addressed to Bhupendra Rajnikant Patel, the current Prime Minister of Gujarat and a member of the Bharatiya Janata party.
“We, a group of citizens from different parts of Gujarat, would like to draw your attention to the hateful messages on social media and public calls for violence against the Muslim community, following the unfortunate and reprehensible murder of Kishan Bharwad by certain criminal elements,” reads the letter dated Feb. 3.
On January 25, two men on bicycles killed Kishan Bharwad, 27, in the Dhandhuka area of ​​Ahmedabad district, capital of the Indian state of Gujarat. According to initial reports, Bharwad was killed over a Facebook post that allegedly hurt religious feelings. Gujarat police have arrested two Muslim men – Shabbir (25) and Imtiaz (27) – in connection with the killing of Kishan Bharwad. In addition to the two killers, Gujarat police also arrested a Muslim cleric, Maulvi Ayyub, from Ahmedabad. Ayyub is accused of supplying arms to Shabbir and Intiaz. One of the signatories of the letter to the government is Father Cedric Prakash, a Jesuit, human rights defender and writer, who lives in Gujarat. According to Prakash, the police acted quickly and efficiently and promoted timely investigations. he.
On the other hand, the letter notes: “Hate messages and public calls for violence against a specific community, currently against the Muslim community, are harmful and dangerous and have the potential to incite further mass violence; the State must prosecute and detain these criminals, elements allowing public order to prevail”.
It should be noted that following the murder of the young man in Dhandhuka, a mob of protesters in Dhandhuka and Rajkot attacked the police and also caused damage to public property. “This shows how volatile the situation is and thus underscores the need for concerted action by the police and civil authorities, to ensure that the lives, property and livelihoods of the Muslim community in Gujarat are in no danger,” said Pr. Prakache worriedly.
“In the interest of Gujarat, we demand that the following measures be taken immediately: order the police to search, prosecute and arrest the criminal elements who spread messages of hatred against the Muslim community on social networks”, adds Akhilesh Dave , a social worker, who is calling for “preventive policing” aimed at identifying “sensitive areas” and ensuring the protection of Muslim settlements, so that the situation in the state does not escalate into open intercommunal violence, such as the one that rocked the state of Gujarat in 2002, hurt by violence between Hindus and Muslims. (SD-PA) (Agenzia Fides, 2/4/2021)