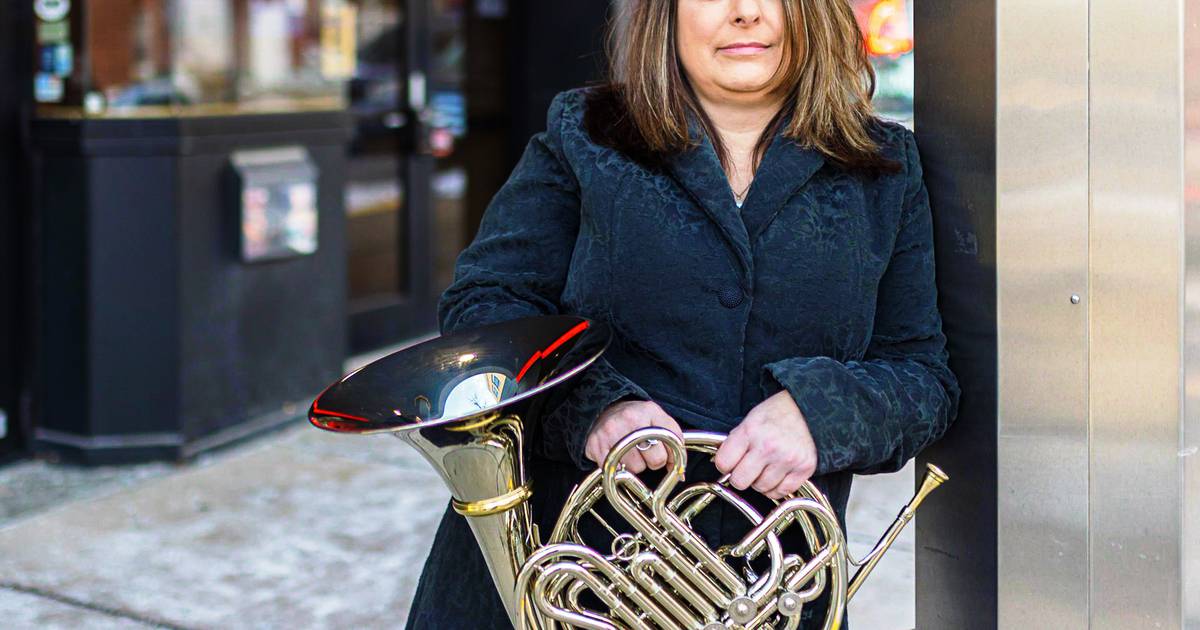 “When I was in kindergarten, my older sister wanted to take piano lessons. I wasn’t interested, but my mom said if they bought a piano, my sister and I should take lessons. It turned out that I liked playing the piano and was good at it,” Griffith said.

“When I was in fourth grade music class at Carrolltown Elementary, they showed us a film strip of instruments. I told my mom I wanted to play English horn,” Griffith said. “My mother investigated and found that the school didn’t have English horns, so she bought me a French horn instead. I ended up playing French horn and it turns out I was good at that too.

“When I was in high school, I transferred to the Baltimore School for the Arts,” Griffith said. “It is a magical and wonderful place. That’s when I decided what I wanted to do forever.

“I did my undergraduate studies at Southern Methodist University on a scholarship. At SMU, I was an academic and I had to follow a varied curriculum. That’s when I started learning art history, my favorite subject at university. I was so happy to have been exposed to it because it colored the lens through which I view the world. They were my most influential classes.

Griffith earned a Masters of Music with a concentration in Musicology from the University of North Texas. Musicology is the study and research of the history of music. She focused on 19th century France and early instruments before the horn had valves. She played the natural horn, a French horn which was round at the time. To change the notes, the player had to change the shape of their hand. It wasn’t until the 1860s that they started playing the French horn. “UNT was also where I was introduced to jazz, one of the great loves of my life.”

While working on her doctorate at the Peabody Conservatory in Baltimore, she had the opportunity to go to Singapore and perform with the Singapore Symphony. Griffith said that “At the age of 24 I played on four continents. I traveled to South America, Mexico, Scandinavia and England for five years. Playing in orchestras made me discover the whole world.

“I was so lucky to have all these experiences. When you go to a foreign place, it really changes the way you look at life. It humanizes the rest of the world for you,” Griffith said.

After Singapore, she became artist in residence in Pittsburgh and performed with the American Wind Symphony for a year. When she had her first son, she was a stay-at-home mom for a while. Afterwards, she started a children’s music business and taught music lessons at daycares and preschools.

Griffith also began teaching at McDaniel College as an adjunct professor in the music department. “I love teaching. I teach the French horn and I play chamber music with my colleagues. It has been such a great opportunity and allowed me to stay in the music business while working on my career as a grants administrator.

Griffith served as deputy director of the Center for Space Sciences and Technology, one of the largest research centers at the University of Maryland, Baltimore County, managing grant funds and 85 scientists for the Center for Research and Exploration in Science and Technology, a cooperative agreement between NASA/Goddard, the University of Maryland, UMBC and other universities, until its retirement in 2019. Scientists who work for CRESST make components that go into telescopes network and perform data analysis.

Receive the main news and sports headlines of the day.

She decided to explore the nonprofit sector and accepted a position as a grants and contracts administrator at the Maryland Coalition of Families in Colombia. From there she went to the Lieber Brain Institute as a contract administrator.

She is now director of the Carroll County Arts Council. “My journey is unorthodox. I forged a different track and loved everything I did. Life is a great opportunity to learn and grow. It’s exciting for me to being here. There’s so much to learn and explore,” Griffith said.

“I’m lucky because Sandy Oxx, the director who created the current theater and galleries, has built such an incredible place. I have this incredible foundation to build on. The Carroll County Arts Council is an institution in Westminster My goal is to expand our reach, so we are the county arts council and have a presence in every municipality,” Griffith explained.

“Next year we are going to have two traveling exhibits and rotate them to different locations around the county. We will be partnering with the library to bring adult education and children’s art education to the library in the form of workshops, classes and events,” said Griffith. “My excellent arts education in the Carroll County public school system has opened up a whole world of possibilities for me. I think the arts council should be a vehicle to expose kids to this new world.

“I hope to establish satellite galleries in other parts of the county. Then people will have access to events everywhere,” Griffith concluded.

Lyndi McNulty is the owner of Gizmo’s Art in Westminster. His column, An Eye for Art, appears regularly in Life & Times.