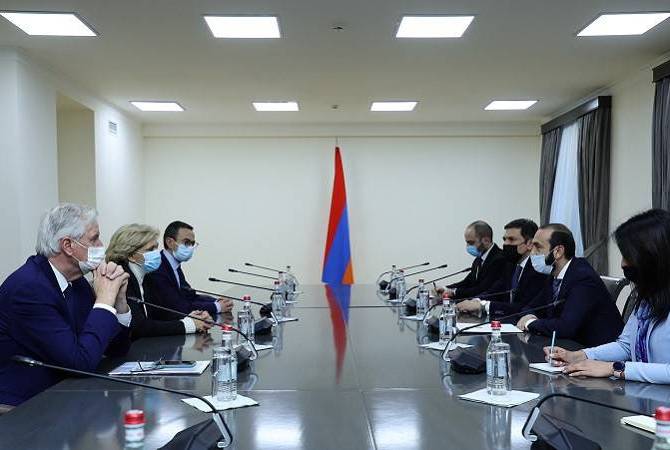 YREVAN, DECEMBER 21, ARMENPRESS. The Minister of Foreign Affairs of the Republic of Armenia Ararat Mirzoyan received the delegation led by the President of the Ile-de-France Regional Council of France ValÃ©rie PÃ©cresse. The meeting also took place in the presence of the president of the “Republican” faction of the French Senate Bruno Retailleau â€¤

As ARMENPRESS was informed by the press service of MFA Armenia, the parties noted with satisfaction the high level of the unique Armenian-French relations based on mutual trust, respect and mutual understanding between the peoples of the two countries.

The continued intensification of interactions between Armenia and France, the further development of cooperation in the fields of education and science, culture and a number of other fields were highlighted. The interlocutors underlined the role of decentralized cooperation, including between Yerevan and the ÃŽle-de-France region, as an important component of strengthening Franco-Armenian ties of friendship.

The Armenian Foreign Minister also noted that one of the priorities for the development of relations is the further expansion of cooperation in the trade and economic field, in the sense of which the road map of economic cooperation Armenian-French signed recently during his visit to France was an important step.

Regional security and stability issues were discussed during the meeting.

Ararat Mirzoyan thanked the Ile-de-France Regional Council chaired by ValÃ©rie PÃ©cresse for the resolution adopted in November 2020, as well as for the financial assistance provided to citizens displaced by the war.

Humanitarian issues requiring an urgent solution were also discussed, in particular the issues of the immediate repatriation of Armenian prisoners of war and other detainees, the protection of the cultural and religious heritage of Artsakh in the territories under the control of Azerbaijan.