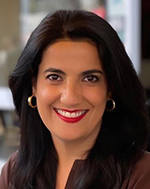 October 21, 2022 (La Mesa) – A political action group calling itself San Diegans Against Hate opposed La Mesa City Council candidate Mejgan Afshan, calling her anti-Israel stances anti-Semitic. Afshan, daughter of Afghan refugees, was asked via her campaign website to respond on Wednesday, October 19, by San Diego Jewish Worldbut had not done so by the end of the afternoon of Thursday 20 October.

San Diegans Against Hate is co-chaired by political consultant Jared Sclar, who has specialized in local elections since starting his political consulting firm earlier this year, and Larry Kornit, who is the city’s housing commissioner. ‘Oceanside and Cantor of the Conservative Congregation. B’nai Tikvah.

In a letter to Jewish voters, Sclar wrote, “Mejgan Afshan, has an extremely disturbing history of anti-Semitic activism and promoting anti-Israel extremism. Ms. Afshan is a well-known leader of the local BDS (Boycott, Divestment and Sanctions) movement which aims to eliminate Israel from existence. She personally teaches students how to get involved in this anti-Semitic movement that continually attacks any Jew who supports the existence of Israel. Additionally, Ms. Afshan blames Israel for the murder of George Floyd, insisting that institutional racism in the United States has only worsened since Israel’s founding in 1948.”

“The aforementioned rhetoric is toxic, divisive, and harmful to the safety of Jews in La Mesa, San Diego County, and across the United States,” Sclar’s ​​letter continues. “Simply put, these radical activists should never have a perch from which to openly promote hatred of Jews. This is not a view we can accept from our local leaders at all levels, especially the La Mesa City Council. »

To substantiate his objections to Afshan, Sclar sent to San Diego Jewish World several screenshots of Afshan’s Facebook page. One, dated June 22, 2020, using a retouched photo of a soldier with a knee on a man’s neck, was taken from the middleeasteye.net website and reads: “Knee on neck, Mass Surveillance and Repression of Protests: How Israel Shaped American Policing. To this, Afshan commented on his Facebook page: “Civil rights leaders have also made trips to Israel supported by the same organizations that silence these human rights abuses. … We want the same funds used to help with this San Diego law enforcement training to be reallocated to the communities that these same law enforcement agencies have been harmed.

Responding to this accusation frequently made by anti-Israel groups, Mickey Rosenfeld, spokesperson for the Israel Police, said in 2011 that the exchange program covers “topics such as border security and media response during crises, as well as general strategies for dealing with mass casualties, carrying out rescue operations, and establishing command and control at the scene of a terrorist attack”.

This year, Professor David Weisburd, a criminologist at Hebrew University, organized a training course for police officers from Massachusetts, Texas and Arizona which, he said, “included role-playing to help participating agents learn to project empathy towards the people they meet, suspend judgment and try to see the “truth” in what the people they meet tell them. how to show care and how to convey the correct message via gaze, nod, posture and tone They were informed about biases and stereotypes, working with minorities and other specific populations and the methods for building trust.

Both Weisburd’s and Rosenfeld’s comments were reported in an article on US-Israel police and law enforcement training that appears on the Jewish Virtual Library website. Groups sponsoring the US-Israel police exchange include the Anti-Defamation League (ADL), the Jewish National Security Institute of America and the Georgia International Law Enforcement Exchange (GILEE).

On August 25, 2020, in a Facebook address to the Democratic Party, Afshan differentiated “anti-Zionism” from “anti-Semitism.” She wrote: “Please stop allowing the fusion of these two distinct ideologies to collide and thus collapse into each other. Our Jewish brothers and sisters deserve to be heard as they call for an end to ethnic cleansing and occupation. We as Americans can no longer support the apartheid state that continues to oppress Palestinians and still claim to be pro-human rights. If you are against the separation of families within our borders and beyond and against for-profit detention centers that make money from those detained inside, then you must once and for all to defend human rights here and in Palestine. Because in fact, the two are bound by American taxpayers’ money and politics. Even the militarization of our US law enforcement over the past decades has been through the training of and by IDF soldiers.

Calling Israel an “apartheid” state is incorrect and politically charged commentary. Under apartheid in South Africa, there was strict racial segregation, with black Africans forced to live in specially designated areas and having no rights to hold political office. In Israel, on the contrary, Arabs and Jews live, work and govern together in a multiracial society. There are Arab members of the Knesset, Arab judges in various courts, including the Israeli Supreme Court, and Arabs in the Israeli diplomatic corps.

Indeed, there are also separation fences and checkpoints for people traveling between the semi-autonomous Palestinian territories of Gaza and the West Bank. Security measures have been put in place to ward off suicide bombers. Israel’s critics rarely admit that the Jewish state is under constant military attack from Gaza, which regularly launches missiles at Israel; Lebanon, which has a large stockpile of missiles supplied by Iran; and West Bank affiliates of Hamas and other anti-Israel terror groups – all of which require defensive security measures that would be unnecessary in peacetime.

On December 20, 2020, Afshan endorsed on Facebook a demand by community activist and former San Diego mayoral candidate Tasha Williamson that law enforcement’s annual trips to Israel be halted and the money spent for them to be diverted to Black, Indigenous, and People of Color (BIPOC) groups.

On February 8, 2021, Afshan approvingly reprinted on his Facebook page a report that 60 social justice organizations have launched a “Drop the ADL” campaign.

While opposing Afshan’s election to the La Mesa City Council, San Diegans Against Hate did not endorse any of its four opponents in the Nov. 8 election for two council seats: Kathleen Brand, Patricia N. Dillard, Laura Lothian and Tony Orlando. Sclar explained that among the four, there are several candidates who are acceptable to the political action group.

Afshan has been endorsed by the San Diego County Democratic Central Committee, the San Diego Labor Council and various officials, including Congresswoman Sara Jacobs, a member of the Jewish community.

Sclar said that while his group opposes Afshan, he recognizes that the sentiment is not unanimous in the Jewish community, as few issues are.

In addition to the La Mesa City Council race, San Diegans Against Hate has sent contributions to candidates in other local races, particularly those for school boards. Among the candidates he backs are Julie Bronstein, a San Dieguito Union school district incumbent and member of the Jewish community; Andrew Hayes, chairman of the Lakeside Union School Board, and Jane Lea Smith and Ringa Viskanta, both candidates for the San Dieguito Union School District; and Carlsbad School Board candidate Michelle Ward.