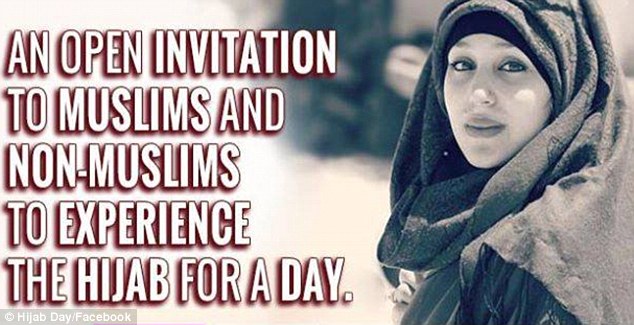 The backlash came as Sciences Po University invited classmates to wear the Muslim headscarf for a day to raise awareness of the treatment of women wearing the hijab.

One woman said she wanted to “cry out my revolt” against the day while another asked why the rights of veiled women should be highlighted in relation to the plight of unveiled women in the world.

Scroll down for video

Marieme Helie Lucas, the Algerian founder of “Secularism is a question of women”, argued that “the right to the veil” in France was already “well defended”.

She said more attention needed to be paid to unveiled women who were abused around the world, citing Nigerian girls who were “forcibly converted, veiled and sold as slaves” by militant Islamic group Boko Haram ” and Iraqi women “in the hands of ‘ISIS or’ Daesh ‘.

She wrote on The Alliance for Workers’ Freedom website: “Who, today in France, defends the right not to veil, when necessary?”

Ms Lucas added: â€œWho defended him when Algerian women were slaughtered by armed fundamentalist groups in the 1990s? Who does what today for the Nigerian girls who are forcibly converted, veiled and sold as slaves by Boko Haram and who are still being held by them. Or for Iraqi women in the hands of Daesh?

She added: “Why so many voices for the rights of veiled women and so few for those who are not veiled, whether they are Muslims or not?”

Hijab Day organizer Laetitia Demaya said the event was designed to “raise awareness, open debate and give voice to women who are often debated in public but rarely heard”.

Meanwhile, Lalia Ducos, president of the Women’s Initiative for Citizenship and Universal Rights (WICUR), added that by considering veiled women as the â€œonly ‘representatives’ of Islam,â€ people risked to discriminate against Muslim women who do not wear the veil.

She spoke of Algerian women killed by fundamentalist groups during the Algerian civil war in the 1990s, with the death toll – including men – estimated at 200,000.

She wrote: “In the name of all the Algerian women who were murdered for refusing the diktat of the dress code, I want to cry out my revolt against this” day “organized by these same students who are supposed to become the elite of our country .

“It is not acceptable that veiled women are discriminated against, however, by confusing religion and culture, by considering veiled women as the only ‘representatives’ of Islam, we run the risk of discriminating against the vast majority of Muslim women. which do not veil. and who fight for the separation between religion and politics, that is to say for secularism, and for the universality of rights.

Ms Ducos added: “The veil is above all designed as a flag that makes fundamentalists more visible: it is mainly political, just like the clothes worn by these men imitating the Taliban.

â€œIslamist fundamentalism is a totalitarian ideology that manipulates Islam for political ends.

An Algerian sociologist argued that “the right to the veil” in France was already “well defended” and that more focus was needed on unveiled women who were abused around the world.

The women’s comments come nearly a week after Hijab Day – which the day’s Facebook page said would help participating students “experience the stigma experienced by veiled women in France.”

“It is about raising awareness, opening the debate and giving a voice to women who are often debated in public but rarely heard,” said Laetitia Demaya, one of the organizers.

Philosopher and author Bernard-Henri Levy tweeted: “Hijab Day at Sc Po. When will there ever be a Sharia Day? Stoning? Slavery?”

“It is a provocation and we denounce the religious nature of the event,” said Carla Sasiela, president of the UNI student union. Local.

Her group said the event is a “total contradiction of the values â€‹â€‹of the Republic and respect for women’s rights”.

Writing on its Facebook page, the student wing of the far-right Front National (FN) criticized an initiative from a “Parisian middle class disconnected from social reality”.

French Prime Minister Manuel Valls recently made a controversial statement that he wanted to ban all forms of religious headscarves in French universities.

One woman wrote: “On behalf of all the Algerian women who were murdered for refusing the diktat of the dress code, I want to cry out my revolt against this” day “organized by these same students who are supposed to become the elite of our country”

â€œThis initiative is particularly nauseating as women around the world struggle to get rid of their chains. In Iran, for example, women get acid thrown in their faces if they don’t wear the veil, â€he said.

The university distanced itself from the initiative in a statement on Twitter, saying the fact that it was taking place on campus “should not be interpreted as support.”

Sciences Po University distanced itself from the initiative on Twitter, saying the fact that it is taking place on campus “should not be interpreted as support” (file photo of a woman muslim in hijab)

In an interview with the daily Liberation, Prime Minister Valls said France should “protect” French Muslims from extremist ideology.

He said the headscarf, when worn for political reasons, oppresses women and is not “a fashion or consumer item like any other”.

When asked whether the headscarf should be banned in universities, Mr. Valls reportedly said “it should be done, but there are constitutional rules that make this ban difficult”.

Wearing the full veil in public spaces has been prohibited by French law since April 2011.

The 2010 “Law prohibiting concealment of the face in public space” applies not only to full veils or burqas worn by some Muslim women, but to all headgear covering the face, including masks, helmets and balaclavas.

The only exceptions are when ordered otherwise under French law – such as motorcycle helmets while riding or for work requiring the face to be covered for health and safety reasons.