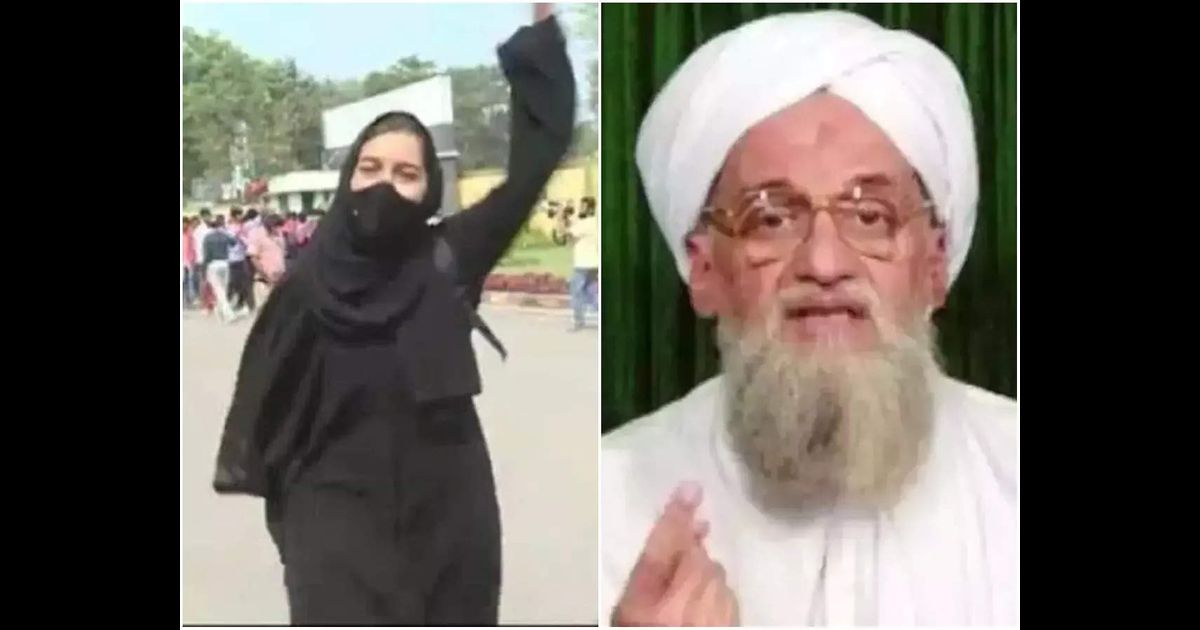 Zawahiri has praised Muskan Khan, the student from Karnataka who faced a crowd that heckled her for wearing the hijab earlier this year.

The video begins with a scene of Muskan fighting off the crowd, followed by Zawahiri’s speech, which focuses solely on the hijab issue. Zawahiri says his “provocative chanting of takbeer” in the face of “a crowd of Hindu polytheists” awakened the Muslim community and “embodied the spirit of war”. He claims she even inspired him to create a poem, which he reads at the end of the video.

“She exposed the reality and unmasked the nature of the conflict between the chaste and pure Muslim ummah and the degenerate and depraved polytheistic and atheist enemies she faces. May Allah reward her greatly for giving a practical lesson to Muslim sisters plagued by an inferiority complex vis-à-vis the decadent Western world. May Allah reward her for exposing the reality of Hindu India and the deception of her pagan democracy,” Zawahiri says in the Arabic video clip with English subtitles.

“We must stop being deceived by India’s mirage of Hindu democracy, which…has never been more than a tool to oppress Islam. We need to realize that in this real world, there are no “human rights…” https://t.co/C5bemuGR6B

“His takbir inspired me to write a few lines of poetry, despite the fact that I am not a poet. I hope our honorable sister accepts this gift of words from me,” he said. Praising ‘free media’ for circulating Muskan’s video, he said, ‘I call on them to expose the unfolding injustice, confront this oppression and spread the facts about the situation on the ground.’

Zawahiri spoke about the importance of Sharia

“We must stop being deceived by India’s mirage of Hindu democracy, which to begin with was only ever a tool to oppress Islam. We have to realize that in this real world, there is no such thing as ‘human rights or ‘respect for the Constitution or the law, or other nonsensical conjectural ideas,’ he says.

According to Zawahiri, the West had used the same deception against Muslims, “the true character of which was shown when France, Holland and Switzerland banned the headscarf while allowing public nudity”. “Those who attack the hijab of Muslims in Egypt and the Maghreb are the same thugs, writers, journalists and even opportunistic turbans who demonize the hijab and Islamic Sharia. He describes it as a “war against Islam, its essential principles, its rules, its ethics and its etiquette”.

“Our Muslim ummah in the Indian subcontinent, our battle today is a battle of awareness, a battle of discernment between illusion and reality. We must understand that the solution is to stick to our Sharia, by uniting in one ummah, from China to the Islamic Maghreb, and from the Caucasus to Somalia, a united ummah waging a concerted war on several fronts. We must gather around the sincere scholars and wage our war ideologically, intellectually, using the media and with weapons on the battlefield against the enemies of Islam,” he says.