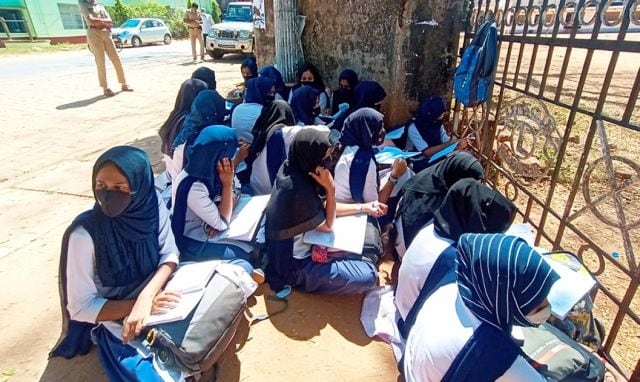 A look at the countries where the veil is banned

The Karnataka High Court has upheld the ban on hijab in educational institutions. Around the world, several countries have passed laws that discourage the wearing of face coverings

The hijab is not an essential religious practice, the Karnataka High Court ruled on Tuesday, upholding the ban on wearing the hijab in educational institutions. The court’s decision is a blow to students who had challenged the ban.

Last month, as the controversy sparked protests, the HC temporarily banned all religious clothing, including the hijab and saffron scarves.

Controversy over face coverings – the burqa, niqab and hijab – has erupted across the world. We take a look at past rows and how countries have dealt with them: Which nations have banned face and head coverings?
Turkey

Mustafa Kemal Ataturk introduced the secularization of Turkey in his 1924 Constitution. While Ataturk never banned the headscarf, he actively discouraged its use in public places. His efforts have seen a near disappearance of the hijab and burqa in Turkey.

In 2013, Turkey lifted its decades-old ban on headscarves in public office. Prime Minister Recep Tayyip Erdogan then hailed this decision as a “step towards normalization”.

Critics had accused Erdogan of lifting the ban to impose his Islamic values ​​on the predominantly Muslim but staunchly secular nation.

France was the first European country to ban the wearing of the burqa or niqab in public. AFP

France was the first European country to ban the wearing of the burqa or niqab in public. The legislation has been in force since April 2011.

In order to suppress allegations of discrimination, the law deliberately avoids mention of the religious veil, stating instead in general terms: “In the public sphere, no one shall wear any garment which serves to cover the face.

Additionally, the wearing of any type of religious clothing (including headscarves) in schools has been banned since 2004.

The ban is estimated to affect only some 2,000 Muslim women. Indeed, it is believed that only this small number of women opt for the veil in a population of five million Muslims.

When introducing the ban, then-President Nicolas Sarkozy said the veils oppressed women and were “unwelcome” in France.

In accordance with the law, wearing the full veil is punishable by a fine of €150 and an instruction for citizenship. Anyone caught forcing a woman to cover her face faces a €30,000 fine.

In 2016, the European giant went a step further and also banned burkinis, full-body women’s swimsuits. The Prime Minister at the time, Manuel Valls, called the swimsuits “an affirmation of political Islam in the public space”.

It was later lifted in resorts after France’s highest administrative court struck down the law.

Switzerland has joined the list of European nations banning the niqab in 2021. In March, more than 51% of Swiss voters voted in favor of an initiative to ban people from covering their faces completely in the streets, in the shops and restaurants.

According to the law, the wearing of the full face veil will always be authorized inside places of prayer and for “indigenous customs”, such as carnival.

The ban came after the Italian-speaking region of Ticino voted to ban face veils in public spaces by any group in September 2013.

Discussions about banning face veils in Switzerland erupted in 2009 when Justice Minister Eveline Widmer-Schlumpf said a ban on face veils should be considered if more Muslim women started wearing them, adding that veils made her “uncomfortable”.

File image of an election poster supporting a ‘burqa ban’ initiative which reads in French: ‘Stop extremism! ahead of a nationwide vote by Swiss citizens on whether or not to ban face coverings in public spaces. AFP

In 2018, Denmark became another European country to introduce a ban on face coverings in public places. Violators can face fines of up to €134 ($157). Repeat offenses are punishable up to 10 times this amount.

The wording of the legislation does not specifically mention Muslim women, but states that “anyone who wears a garment which hides the face in public shall be punished with a fine”.

A law prohibiting the full-face veil came into force in Belgium in July 2011. The law prohibits any clothing that conceals the identity of the wearer in places such as parks and on the street. Anyone who breaks the law risks a fine or up to seven days in jail.

Support for the legislation has crossed the ideological spectrum, with supporters calling it an effort to promote gender equality.

“I think we have to defend our fundamental Enlightenment principles. Men and women are equal in all respects,” said Peter Dedecker, a centre-right Flemish New Alliance MP.

If you cover your face with a veil in the Netherlands, you risk a fine of at least €150. The ban applies not only to burqas and other veils, but also to full-face helmets and balaclavas.

The Netherlands introduced the ban after 14 years of debate. In 2005, the Dutch parliament surprisingly voted in favor of a proposal for a complete burqa ban that had been introduced by right-wing lawmaker Geert Wilders. Parliament passed a softer version of the proposal in 2016.

A 1975 law to protect public order prohibits face coverings in public, but courts have consistently rejected local measures to use the ban to ban the full veil.

Two regions held by the anti-immigrant Northern League – Lombardy and Veneto – have banned the burqa and full-face veil in hospitals and public places.

File image of a model holding an information leaflet about Austrian restrictions prohibiting the wearing of burkas and other face-covering items in public places and buildings, in Vienna. AFP

The ruling coalition agreed in January 2017 to ban the full veil (niqab and burka) in public spaces such as courts and schools, with the law taking effect in October of the same year. Known as the law against wearing the face veil, it forces people to show their facial features from the chin to the hairline. If this area is not visible, they are liable to a fine of up to €150.

Like the Netherlands, Bulgaria introduced a burqa ban in 2016. Wearers face a fine of up to €750 if they violate it. There are some exceptions for people playing sports, at work or in a house of prayer.

Wearing the burqa was temporarily banned in 2019 after suicide bombings on Easter Sunday killed more than 260 people. AFP

In April 2021, the Sri Lankan cabinet approved a proposal to ban the wearing of the full veil, including the Muslim burqa in public, citing national security concerns, despite a comment from a United Nations expert that this would violate international law.

Public Security Minister Sarath Weerasekera called the burqa, a garment that covers the body and face worn by some Muslim women, a “sign of religious extremism” and said a ban would improve national security.

Wearing the burqa was temporarily banned in 2019 after suicide bombings on Easter Sunday killed more than 260 people.

The Russian region of Stavropol has banned the hijab: the first of its kind imposed by a region of the Russian Federation. The decision was upheld by the Supreme Court of Russia in July 2013.

Islamic clothing is not banned in the UK, but schools are allowed to decide their own dress code after a 2007 directive.

In January 2010, then Schools Secretary Ed Balls said it was “unBritish” to tell people what to wear. A 2016 poll found that 57% of the British population supported banning the burqa.

With contributions from agencies