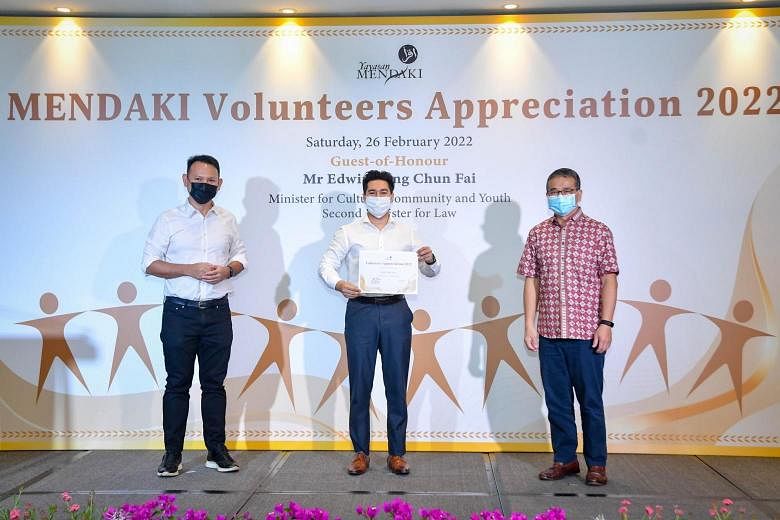 SINGAPORE — Nurshahiddin Abdul Rasid, 30, a quality assurance and accreditation manager, failed O-level math as a teenager and couldn’t get into a college or polytechnic.

It was a wake-up call that prompted him to study hard at a private school, and he managed to get into Singapore Management University, where he eventually graduated with a Master of Science in Management.

After graduating in 2020, he signed up as a volunteer with the Malay/Muslim self-help group Mendaki to mentor students as part of its math coaching program for the primary school leaving exam. He didn’t want children who didn’t like studying to have the same regrets he did.

On Saturday February 26, Mr Nurshahiddin was among 126 volunteers recognized by Mendaki for their contributions to the Malay/Muslim community over the past three years.

Speaking at the Volunteer Appreciation Ceremony at the Village Hotel Katong, Mr. Edwin Tong, Minister of Culture, Community and Youth and Second Minister of Law, said Mendaki is expanding its volunteer program this year. youth mentoring at 11 M³@Towns and planned to recruit 500 more volunteers to mentor an additional 1,000 youth.

The M³ initiative is a link between the Islamic Religious Council of Singapore, Mendaki and the Council of Malaysian People’s Association Activities Executive Committees.

The M³@Towns program provides a platform for volunteers and professionals to work together to meet the needs of residents.

The 10 constituencies currently on the agenda include Bedok, Jurong, Geylang Serai and Jalan Besar.

Despite the Covid-19 pandemic, the number of volunteers deployed by Mendaki last year increased by 63% compared to 2020, helping more than 5,000 beneficiaries, Mendaki said.

In his speech, Tong noted a 40 percent increase over the past 10 years in the number of recipients of the Anugerah Mendaki Prize, which is awarded annually to students who are among the top 10 percent in national examinations.

The number of recipients of the Anugerah Cemerlang, or Excellence Award, given to graduates with top-notch degrees, has increased nearly 12-fold – to 71 graduates last year from just six in 2011.

Other Mendaki programs include the Mendaki Tuition Scheme, which provides affordable tuition for Muslim students, and the [email protected] program, which guides parents of preschoolers to teach children basic concepts of calculation.

Congratulating the winners on Saturday, Mr Tong said: “Your efforts will indeed encourage many more people to volunteer, volunteer, lend a hand and give back to the community.

“Together, we can all play a part in building a more caring and inclusive Singapore. The one we will leave behind for our children and their children, the one who is gracious, cares for all and ensures that no one is left behind. account.