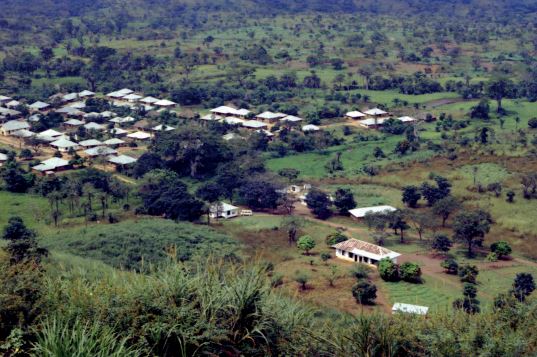 Ahmadiyyat has reached every home

Open-air lectures are given twice a week and a large audience listens to them with great attention. By the grace of Allah, I say with the openness of my heart that Ahmadiyyat’s message has reached every home in Lagos. Ahmadiyyat has become the general topic of conversation between men and women. Some researchers ask questions through certain people after the lectures. The educated class prevents others from opposing the Jamaat Ahmadiyya in their respective constituencies.

Lessons from the Holy Quran for Women

Usual dars of the Holy Quran for ladies takes place three times a week. I deliver dars once a week and Imam Qasim Ajose addresses them twice a week. As it is a big city, it is difficult for women to congregate every day of the week.

dars of the book, Bulugh al-Maram is being delivered and the chapter of Zakat has already been completed. The Holy Quran was also taught until the first half of the second part. Moreover, Yoruba Quran classes are held regularly in different parts of the city under the supervision of Imam Qasim Ajose, alfa Joshua, alfa MB Lual and Imam Luan.

In Epetado, we withdrew from a mosque without any confrontation with our adversaries, and instead we built a new mosque which will also serve as medersa [school]. During the opening ceremony, this humble laid the foundations of the mosque and placed the first bamboo after proper speech and prayers. It is a bamboo mosque with corrugated sheets as a roof. For our congregational purposes and other social gatherings, it’s pretty small. However, we trust in God who, in due time, will give much space to our brothers. We have also built two mosques in two other places. The little jamats of these regions perform prayers there. A noble-hearted Christian gentleman was generous enough to allocate land to our people for the construction of a mosque.

If Muslims get up, it will be by Ahmadiyyat

A special platform granted by Allah the Almighty i.e. the press is used in pursuit of the divine message. A small pamphlet –What is the Ahmadiyya Movement? – has been published and distributed. In addition, The Address to the Prince of Wales was also reprinted and widely distributed. There are many misconceptions about Muslims here and their pitiful condition is the same everywhere. The Christian diplomats take advantage on the one hand of their ignorance and on the other hand spread the mistrust of the government towards them. It was therefore necessary to circulate this address so that the good is not veiled under the evil.

Apart from the local press, two famous newspapers of reputation and weight publish articles of appreciation on the movement. Among Christian editors, this belief is gaining ground that if ever Muslims are to rise again, it will be by and in the form of Ahmadiyyat.

West Africaa well-known magazine in London, published an excellent article on the Jamaat on the occasion of Eid-ul-Fitr.

The elders of the Jamaat are visited in their homes to renew their faith and the chiefs of the city come to meet us. The Ahmadiyyat talk series takes place on a regular basis. Some educated Christians are under tablegh. Alas! Many well-educated children of Muslims converted to Christianity. A famous lawyer once told our brother that his grandmother was Muslim, while another, a merchant, said that his father was Muslim. They say,

“Your sermon is correct and the teaching is good, but where can we go and place ourselves? The alfas [maulvis] misled us on the teachings of the Holy Quran by telling us stories. Now that you’ve come, we’ll decide.

Brother Maulvi Fazl Rahman meets Gold Coast Jamaat and is engaged in the tablegh round. He faces great difficulties while preaching and some of the words he writes in various letters are as follows:

“I had to walk eight miles and when I got to my destination, I had nothing to eat. Thus, I had to sleep on an empty stomach putting my trust in Allah.

“The difficulty of [not finding] interpreters are great and the journeys are difficult. I live more than what I read in your [Hazrat Maulvi Abdur Rahim Nayyar’s] written.

“As soon as I sat in the Steam Launch [boat], I felt sick and started to feel nauseous. I go to Firsena in the morning. I have a cold and a fever. I am writing this letter in this state of illness.

“People here are so clueless they don’t even know who George V is.”

Please pray for the health and success of this brother. He’s as far from me as Bombay [now Mumbai] comes from Mauritius. Nigeria and the Gold Coast are two separate countries with separate governments. The Gold Coast authorities are also causing a lot of trouble.

Besides countless souls who have benefited from the talks of the missionaries and felt a change in their hearts, the result of our meager efforts is that 19 people converted to Ahmadiyyat during the days of this report and five people converted to Islam by Fazl Rahman Sahib.

Great hope in Allah the Almighty

Currently, we are experiencing many difficulties and problems. Much of the Jamaat is illiterate. They do not contribute regularly to the cause of God. The expenses here are three times higher than in London and everyone tries to cheat you and charge you more when they see a non-native person. Thus, on the one hand we are confronted with the prejudices of Gold Coast government officials, the hidden wrongdoings of priests, the extreme expenses, the difficulty of procuring food, etc., and on the other hand, the Nigeria’s diplomatic black Englishmen do not want Ahmadiyyat’s foundations to be built here. In their view, a strongly established Ahmadiyya Jamaat will hamper their assaults on innocent Muslims and harm their increasingly profitable trade conducted by ignorant Muslims. Some officials also do not want Muslims to become enlightened. However, we have great hope in Allah the Almighty, and in the words of Mr. Martin, General Secretary of Lagos Jamaat, we have great hope in God that insha’allah“Nigeria will not only bear its own expenses, but the expenses of England [mission] as well.”

We are hopeful that the government will soon allocate us land for a school. His honor, the lieutenant governor has given us his word. It is estimated that the construction of the school will cost five thousand pounds. We sincerely hope that by the grace of Almighty Allah, the whole country will convert to Ahmadiyyat.

Due to the opposition of some people, the case of Jami masjid [central mosque] has been filed in the High Court of Nigeria with a hearing scheduled for October [1922]therefore friends are requested to pray in this regard.

Imam Muhammad Ismail Sheta is engaged in tablegh in the regions of French Dahomey. He writes: “I go far from the coast to the interior of the country where, in addition to trade, I engage in the work of spreading the message of Islam.

Likewise, Brother Nooruddin in Port Harcourt, Brother Saeed Nooruddin in Abeokuta and Mr. Abdur Rahim Smith are busy doing God’s work in Oshogbo. It is much more difficult to bring Muslims into the fold of true Islam than to convert disbelievers to Islam.

Impact of Ahmadiyya Jamaat on the Culture of Africa

If you see a young man riding a bicycle wearing a high quality Roman cap, or a woman wearing an English dress with a headscarf, then you should know that they are Ahmadis. Before I arrived, Muslim women often did not cover themselves properly and wearing a long dress was considered part of Christianity, but by the grace of Allah, the good example of Ahmadi women had such an impact that […] even non-Ahmadi women have started wearing shirts and some are wearing dresses. In addition, they cover their heads. However, much remains to be done and the dress code of Ahmadi women is very important. The capacities of African women are much more than those of men.

(Translated by Al Hakam from the original Urdu published in the August 17, 1922 issue of Al Fazl, with the help of the translation published in The review of religionsOctober and November 1922)

In the state of Alabama, how many payday loans can you have at one time?